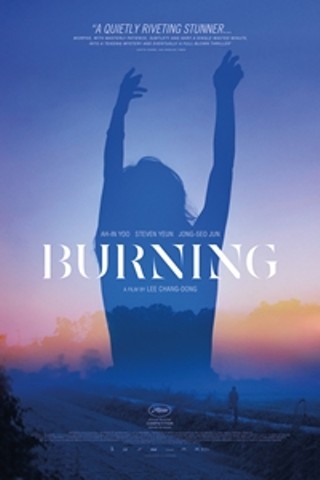 Maybe it says more about my own mindset of late than anything else, but I spent much of Korean director Lee Chang-dong's Burning -- a look at obsession, class and romantic torment based loosely on Haruki Murakami's short story "Barn Burning," itself inspired by the William Faulkner story of the same name -- thinking that the tale was eventually going to turn apocalyptic. Donald Trump blares on TV sets, the North Korean border is often in view, ominous flocks of birds keep blasting through the background and the slow, rolling tension among the characters feels like it's headed toward an outsize release.

Burning opens with a meet-cute (or rather, re-meet-cute) between sturdy, shy day laborer Jongsu (Yoo Ah-in) and lovely, lively Haemi (Jun Jong-seo), who grew up in the same small town but haven't seen each other in years. Before long, they're holding hands and making love, and he's agreeing to cat-sit in her absurdly tiny apartment while she goes on a trip to Africa. When Haemi returns from her trip to Africa with hunky, wealthy playboy Ben (Steven Yeun) in tow, Jongsu is devastated — though he doesn't exactly show it; he looks out at the world with tired, bewildered eyes, his responses frustratingly muted, and Yoo Ah-in's performance is a heartbreaking marvel of lovesick strain.

Lee Chang-dong's dexterity with the telling minutiae of human interactions ensures that Burning makes for an emotionally gripping film, though the finale, while it doesn't actually resolve anything, felt to me more convenient than convincing. Not unlike Taxi Driver, Burning pulls us into the inner world of a relatable central character, then pulls the rug out from under us.
By Bilge Ebiri

Burning (beo-ning) is not showing in any theaters in the area.