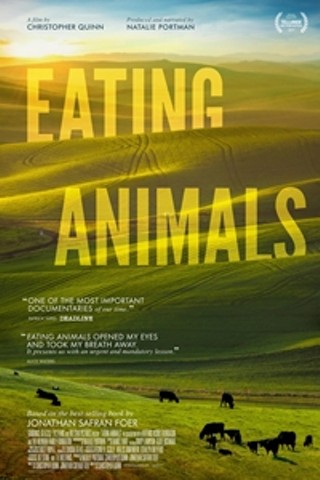 The creators of the new documentary Eating Animals, based loosely on a treatise by novelist Jonathan Safran Foer, aren't exposing the cruelty of factory farming. Accounts of the horrors of Concentrated Animal Feeding Operations from reporters, activists and whistleblowers have exposed it again and again. Eating Animals urges us to face what we already suspect — that something is deeply, foully wrong.

In that sense, the film is wildly successful, stirring fury and revulsion. The filmmakers take us inside COFAs, offering a perspective that lawmakers funded by agribusiness have passed statutes to deny us. Here, by the thousands, are animals trapped in bodies that have been bioengineered to yield maximum meat and dairy, but are not suitable be to lived in. Living inside, immobile, existing just long enough to plump up to their owners' satisfaction, these animals never build up resistances to diseases; that obliges the farmers to douse and inject them with antibiotics that then taint our food supply, all while encouraging the development of new, drug-resistant bacteria. "They've calculated how close to death we can keep an animal without killing it," Natalie Portman intones, in quietly outraged narration.

The title suggests that, like Foer's book, Eating Animals will interrogate the sustainability, practicality and fundamental morality of global food production and consumption. Its approach, though, is too scattershot, its arguments too dependent on what footage was acquired by the filmmakers. As a work of sustained, thoughtful inquiry, Eating Animals is a bust; as a reminder of what we should all be thinking about, though, it's searing. After seeing it, pretending not to know is impossible.
By Alan Scherstuhl

Eating Animals is not showing in any theaters in the area.