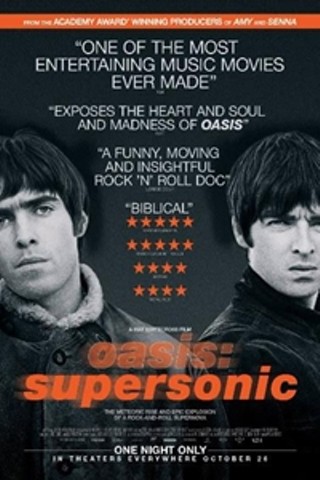 America never understood Oasis' hugeness. By that I don't just mean the band's global popularity or the nationalistic fervor it stirred in the U.K. I mean, simply, its hugeness of sound. In the States, only the ballads connected, the glorious/meaningless Beatle raptures "Wonderwall," "Live Forever" and "Champagne Supernova" -- that last one so sweepingly inarticulate that, if you're as stoned as it is, the dumbest lyrics might circle right back around to genius.

The swaggering Gallagher brothers synthesized into Definitely Maybe, their debut album, everything they had ever loved about English rock and roll.

Songwriter/guitarist Noel Gallagher's thievery was in service of an aesthetic goal not dissimilar from the Ramones', just more conservative: stripping away everything lame about present-day rock to mash the spirit of an earlier age -- in this case, Beatles '66 -- with a sour-candy punk crunch.

Mat Whitecross' ripping, riotous new Oasis doc makes the case for the band and its moment with footage that's comic, tragic or tragicomic: There they are at an industry showcase at the Whiskey a Go Go, failing to bash through their set opener because a day earlier they mistook crystal meth for cocaine. There's Noel or his snotty brother Liam, high as hell, ranting toward camcorders so fast that Americans might fight to suss out the particulars.

As a music comedy, this is up there with Popstar. It's thick with tales of brawls, breakups, stage-walkoffs, busted hotel rooms, astonishing rudeness and surprising pathos. The Gallaghers remain wry and winningly shameless. Noel exhibits more self-awareness than you might expect, marveling that "they sing you words back that you nonsensically wrote at three o'clock in the morning."
By Alan Scherstuhl

Oasis: Supersonic is not showing in any theaters in the area.