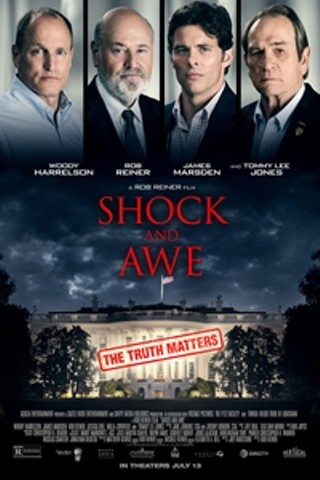 Unlike All the President’s Men or even The Post, Rob Reiner’s Shock and Awe -- which tells the story of Knight Ridder’s Jonathan Landay (Woody Harrelson) and Warren Strobel (James Marsden) finding and printing the truth of the Bush administration’s lies during the run-up to the war in Iraq -- isn’t about verisimilitude. Julia Roberts’ I Love Trouble is more convincing a portrait of shoe-leather journalism. Instead, Reiner is after something less noble and artistically satisfying but still potent -- sometimes even thrilling. Shock and Awe is a 90-minute liberal told-you-so, a polemic that, like a long Rachel Maddow segment, is more cheery than thunderous, even as it names the names that must be named. Reiner and his screenwriter, Joey Hartstone, produce the receipts.

Reiner roll-calls through the senators who voted to approve Bush’s invasion: Joe Biden, Hillary Clinton, John Kerry, Joseph Lieberman, John McCain. We get a scathing speech about the corruption of Colin Powell, the Bush team’s “closer,” and Judith Miller of The New York Times gets justifiably excoriated as a stenographer of the White House’s lies.

Reiner’s film is jittery at first, uneven in its rhythms, overawed by its history, corny as Iowa in July. But the second half, which finds Landay and Strobel interrogating sources, often in brisk montage, is score-settling bliss. (They’re joined in their quest by Reiner himself, playing Knight Ridder’s Washington bureau chief John Walcott, and a dutifully salty Tommy Lee Jones as Joe Galloway.) Shock and Awe -- so ingratiating, blunt, set-bound, over-lit and baldly expository -- never suggests life in an actual newsroom. But it nails what life was like for those of us who understood that we were witnessing the fourth estate’s abdication of its responsibility.
By Alan Scherstuhl

Shock and Awe is not showing in any theaters in the area.