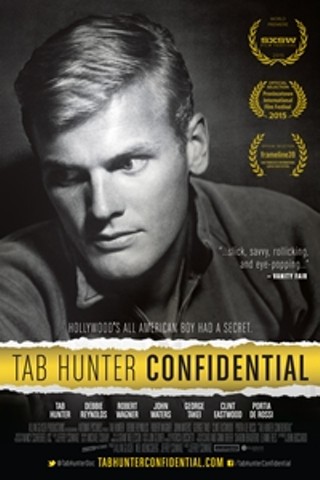 Fleet and breezy, Tab Hunter Confidential follows the career of the preposterously good-looking star who was Warner Bros.' number one attraction in the Fifties -- and whose movie career was all but finished by the early Sixties. Based on Hunter's terrifically entertaining 2005 memoir (written with Eddie Muller) and produced by his longtime partner, Allan Glaser, this documentary features Hunter front and center, talking about the pleasures of his stardom (fueled more by the fan mags and the pop singles he cut than the mostly lackluster pictures Warner gave him) and his frustrations with how that stardom limited his opportunities as an actor, opportunities more forthcoming in live TV work under the direction of Arthur Penn, John Frankenheimer, and others.

There are reminiscences from, among others, Robert Wagner, Debbie Reynolds, and John Waters, who cast Hunter opposite Divine in Polyester. Much of the doc focuses on Hunter's experience as a closeted gay man sold as a heartthrob to teen girls. To that end, Hunter, casual and good-humored throughout, tells a story that defies expectations: There were, of course, threats of outing -- notably, from the scandal rag Confidential -- but also protection from the studio, with one especially touching moment of support coming from Jack Warner himself. The movie follows Hunter's life after leaving the Warners, the bad movies and years on the dinner-theater circuit. And it reveals something stronger: the quiet refusal, beneath Hunter's affable, casual manner, to be anything less than he is, neither the "sigh guy" nor a convenient symbol of gay pride.
By Charles Taylor

Tab Hunter Confidential is not showing in any theaters in the area.