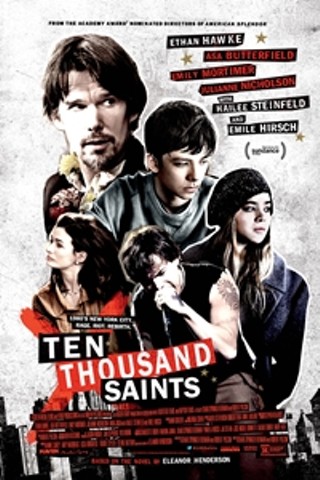 An opening line can make or break a movie, but sometimes a clunker shouldn't be held against an otherwise sweet, well-observed picture. Shari Springer Berman and Robert Pulcini's Ten Thousand Saints starts with a dud: "I've heard people say that life is like a river, and we're all just tiny minnows struggling through the freeze, the thaw, and the flow." But once that minnow business is out of the way, this adaptation of Eleanor Henderson's 2011 novel starts gaining quiet momentum.

Jude (Asa Butterfield) is a hippie kid growing up in Vermont, having been raised mostly by his mom (Julianne Nicholson): His charming but irresponsible dad, Les (Ethan Hawke), took off years ago to start a new life in New York as a pot dealer. After Jude's best friend, Teddy (Avan Jogia), dies of a drug overdose, Jude moves to the city to live with his dad, and begins an unsteady friendship with sophisticated, enigmatic Eliza (Hailee Steinfeld), whom he feels is the strongest remaining link to his lost friend. The complication -- or, rather, one of many complications in this story about tangled family relationships -- is that Eliza is Les's sort-of stepdaughter.

There's a lot going on, and because there are so many family-relationship arrows pointing every which way, some of the interpersonal connections aren't as vivid as they could be. Still, the movie has a lilting, generous spirit: Springer Berman and Pulcini, the filmmaking team behind the 2003 American Splendor, have a feel for human eccentricities and weaknesses, and they know how to draw the best from their casts. Steinfeld is lovely, and sometimes heartrending, and Hawke becomes a better actor with each passing year.
By Stephanie Zacharek

Ten Thousand Saints is not showing in any theaters in the area.