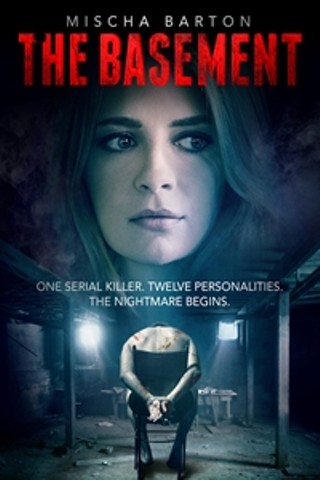 A feast for its two main actors, the uneven but diverting horror movie The Basement is short on excessive gore and long on talk -- some chopped-off fingers notwithstanding. While running a late night errand, Craig (Cayleb Long), a successful Los Angeles musician, is kidnapped, beaten and tied to a chair in a small basement. His captor, Bill (Jackson Davis), first appears wearing a clown suit, but Craig soon realizes he's being held by an infamous serial killer. The clown exits, and a beat cop, then later, a detective appear, both accusing Craig of being the killer. In an inventive riff on Split, the writing and directing team of Brian M. Conley and Nathan Ives have created an actor's dream for the gifted Davis, who portrays all of Craig's visitors, including a skimpily dressed woman claiming to be his mother. By then, Craig, still tied to the chair — but missing those fingers — is working furiously to convince each visitor, and by extension, his captor, to let him go free. That method usually involves an urgent monologue about a dark moment from their (fake) shared past. In the home stretch, Long and Davis act up a storm, and that can be fun.

The energy-zapper here is a clever but poorly staged final twist, as well as the many cutaways to Craig's wife (Mischa Barton) fretting at home. Barton, who's becoming the queen of low-budget, barely released horror films, doesn't have much to do, even though her name is above the title. If Barton has seen the final film, she might well have wished she'd had a scene or three with her go-for-broke costars.
By Chuck Wilson

The Basement is not showing in any theaters in the area.