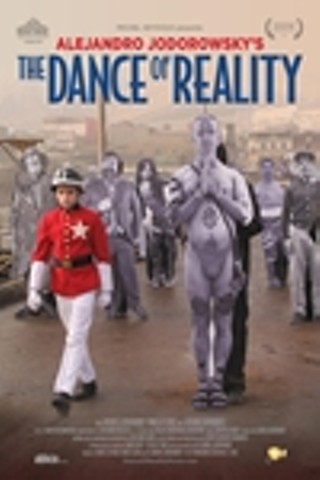 The grand old dirty pope of midnight-movie voodoo and post-'60s turn-on, drop-out mythopoeia returns with a vengeance, in his autumnal phase and with, surprise, a personal look backward at his own childhood. The Dance of Reality may be Alejandro Jodorowsky's best film, and certainly, in a filmography top-heavy with freak-show hyperbole and symbology stew, the one most invested in narrative meaning. Now a spring-chicken 84, Jodorowsky stands as a kind of anti-master, doggedly and self-seriously making the insane kinds of movies only pharma-busy teenagers might want to watch and imitate, and yet, by now, his absurd struggle has attained a kind of pulpy grandeur.

Every inch the graybeard valedictory, The Dance of Reality has something El Topo (1970), and The Holy Mountain (1973) did not: the graceful clarity of a fairy tale. Or, rather, a Marquezian magical realism populated by the familiar Jodorowsky carnival of animals, dwarfs, amputees, clowns, shamans, and endomorphs. Jodorowsky was born in the small seaside Chilean village of Tocopilla, and that's where he returned to shoot his memoir-movie, turning the town into a circus. Raised in his émigré parents' undergarment shop, nine-year-old Alejandro (Jeremias Herskovits) is torn between his sadistic and homophobic father (Brontis Jodorowsky), who rabidly tries to toughen the little softie up with abuse, and his dreamy, bosomy mother (Pamela Flores), who, in a self-conscious master stroke, sings all of her lines in an operatic soprano.

The Dance of Reality shouldn't be anyone's indoctrination to El Maestro -- start chronologically, with Fando & Lis (1968) -- but as a sweet, inventive coda to one of film culture's unique and defiant careers, it's a welcome thing. (
By Michael Atkinson

The Dance of Reality (La danza de la realidad) is not showing in any theaters in the area.