“I have to thank y’all because all of you are the reason this song went not one…not two…not three…but four times platinum,” exclaimed A$AP Ferg as he stood center stage at the House of Blues bathed in bright white light. A semicircle of light stands surrounded the New York MC illuminating him with red beams which cut through the blanket of white.

“This song is for y’all. If you had a stressful day, I want you to get that all out right now.”

Ferg’s voice cut through the speakers and the crowd screamed and started rapping along with “Plain Jane,” the lead single from his 2017 mixtape Still Striving. Fans crowd surfed and threw water in the air as the Harlem native frantically bounced in front of them donning a green jumpsuit covered with sewn on patches.

The Floor Seats tour, named after Ferg’s most recent EP touched down in Houston Friday night bringing one of the more popular members of A$AP Mob to the city that influenced him.

Blac Youngsta joined A$AP Ferg as a surprise gust.
Photo by Jennifer Lake
A$AP Mob started dropping music on YouTube in 2006 and grabbed the attention of the world with their southern, and more specifically Houston sound. While their stand out artist A$AP Rocky sold millions with his debut, Long. Live. A$AP, Ferg proved to be a commercial powerhouse providing a series of albums and mixtapes full of street anthems like Work, Shabba, New Level, and Plain Jane. Ferg made sure fans experienced those hits live Friday night while also making sure to pay respect to the southern Hip Hop music that influenced his sound.

“Houston is one of the places I came to before I got signed,” reminisced Ferg as he looked over the crowd. “I met so many people here. Trae…Killa Kyleon…Bun B. I love this city. I love the culture.”

A$AP Ferg proved he wasn’t just playing lip service to the South, bringing out Trae to open up the show and Dice Soho in the middle of his set to perform a song. Ferg then even brought out Memphis native Blac Youngsta to perform his single “Booty” and the two artists bounced across the stage in unison with the crowd and the chart topping single. 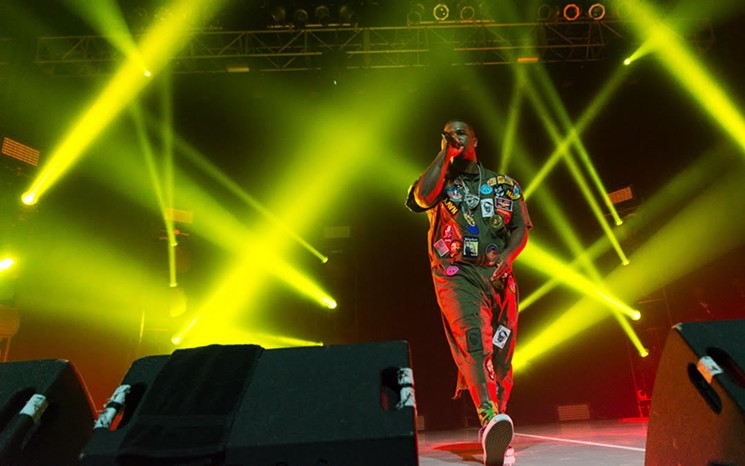 The Floor Seats tour displayed the showmanship of A$AP Ferg who was able to keep the high energy crowd on their feet by offering a show with almost no downtime. The only time Ferg took breaks from performing was to thank the crowd and show his appreciation for the city and to show respect with a moment of silence to the founder of his label, A$AP Yams.

“I just want to thank y’all for supporting me and just know that Houston is like a second home for me.”
KEEP THE HOUSTON PRESS FREE... Since we started the Houston Press, it has been defined as the free, independent voice of Houston, and we'd like to keep it that way. With local media under siege, it's more important than ever for us to rally support behind funding our local journalism. You can help by participating in our "I Support" program, allowing us to keep offering readers access to our incisive coverage of local news, food and culture with no paywalls.
Make a one-time donation today for as little as $1.