Poison Promises Nothing But a "Good Time" on Summer Tour

Your mama WILL dance to Poison! All original members in 2018: Rikki Rockett, Bobby Dall, Bret Michaels, and C.C. DeVille. Photo by Mark Weiss/Courtesy of ABC-PR
It’s often said that any rock band has years and years to come up with the material for their first album and just months go do the same for their second. That’s the situation that glam metalers Poison found themselves in during 1988 when faced with the challenge of following up their successful debut Look What the Cat Dragged In. That record spawned the hit singles “I Want Action,” “I Won’t Forget You,” and “Talk Dirty to Me.”

“Everybody always looks at their second album after a successful first album as a make or break thing,” Poison bassist Bobby Dall reflects. “We had just finished touring for almost two years and went straight into rehearsal sessions and then straight into the studio. Those were the days when you didn’t have time to think about such things, to be sure!”

Open Up and Say…Ahh! was the resulting sophomore effort of Mssrs. Dall, Bret Michaels (vocals), C.C. DeVille (guitar), and Rikki Rockett (drums). It proved to be the biggest seller in the band’s history, and spun off four hits in “Nothin’ But a Good Time,” “Every Rose Has Its Thorn” to the cautionary tale “Fallen Angel,” and an unlikely cover of Loggins and Messina’s “Your Mama Don’t Dance.”


The band pulled off an impressive two-fer as “Nothin’” ranks as one of the biggest party anthems of the decade and “Rose” has the same status in the power ballad category. The constant rotation of the videos on MTV – usually featuring the band in colorful outfits and sky-high hair – positioned the band as a fun, sexy alternative to the more aggressive, dangerous Guns ‘n Roses and the sleazily decadent Mötley Crüe.

Part of that may have had to do with the fact that Poison were transplants from Harrisburg, Pennsylvania instead of L.A. natives. And they weren’t really part of the storied Sunset Strip hard rock/metal culture, cutting their teeth mostly further away on Santa Monica Blvd. at the Troubadour Club. Poison didn’t play the Strip’s most famous clubs – the Whisky a Go Go and the Roxy – until after they were a success.

But back to their groundbreaking second album. “When we recorded it, we knew what it was. But it’s not validated until it happens and you start to hear it on the radio,” Dall says. “With ‘Nothin’,’ we knew we had a party anthem. With ‘Every Rose,’ we thought we had a great power ballad, and that one was #1 for two weeks.” The album celebrated its 30th anniversary this month.

Open Up and Say…Ahh! was also memorable for its cover featuring a woman made up as some sort of tiger creature and out of whose open mouth flopped out an, um, impressive tongue. Some outlets refused to carry the record on the grounds of perceived vulgarity, indecency, and even demonic reasons. So an alternate covered was released showing just the she-creature’s eyes and the rest of the cover blacked out. But don’t think for minute that the band was upset about the forced alteration.

“To be honest with you…we did it on purpose!” Dall laughs. “We knew that Wal-Mart would ban it, and sure enough they did. It was the best press we could have ever gotten for the album!” 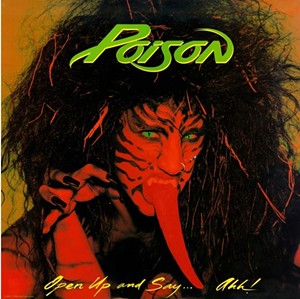 The cover too hot for Wal-Mart!
Cover from Enigma Records
In the years since that album's release, Poison has continued to put out albums and tour relentlessly, scoring more hits with "Something to Believe In," "Unskinny Bop," and "Stand." Bret Michaels found a sort of second career as a reality TV star both in the several seasons of his “Rock of Love” dating show and as a contestant on Donald’s Trump’s “The Apprentice,” winning on the show in 2010.

Band members have also dealt with health issues – some related to substance abuse, some to accidents, and some to pretty severe medical reasons. And the original quartet has not always been together. But as the band is about to embark on a headlining summer shed "Nothin' But a Good Time" tour with Cheap Trick and Pop Evil opening, all four originals have been together since 1996.

“With Poison, we’re blessed that we do still have all four members, though we’re getting up there in age,” he says. “It’s the synergy of the band. The whole of the band is greater than the sum of its parts. And I hope it goes on for another 10, 20 years. We like to keep it where it’s escapism, our shows are about enjoying yourself and getting away from the world’s problems and not thinking about them.”

As for Houston or Texas connections – other than the fact that Dall’s real last name is Kuykendall (just one letter off the famous Houston street) – the bassist notes that is “first ex-wife” is from the state. He adds that audiences here are always “rockin’”

And plans for himself or the band after the current tour wraps up?

“Man, I can’t even think about that. Right now, it’s all about getting ready for the tour,” he laughs. “But we’re all in our fifties now…so I have a long nap planned!”