A Year In Review: My Three Favorite Concerts

2018's concert lineup had us feeling like... Photo by Jack Gorman
Due to our gargantuan scope, Houston is a haven for live music. As the nation's fourth largest city, we have become a destination for touring acts by default — It certainly isn't because of our collective reputation as an audience — and 2018 saw plenty of great performances in the Bayou City.

At the end of each year, I like to take inventory of the concerts I've attended. This year was especially notable because of how many quintessential acts I was able to see live for the first time. On top of that, two of them claimed to have been on tour for the very last time, even though we all know better than to believe an act who says he or she is retiring.

Big ol' belt buckles, death metal and the occult and British glam rock round out my picks. Below are my three favorite shows of 2018: 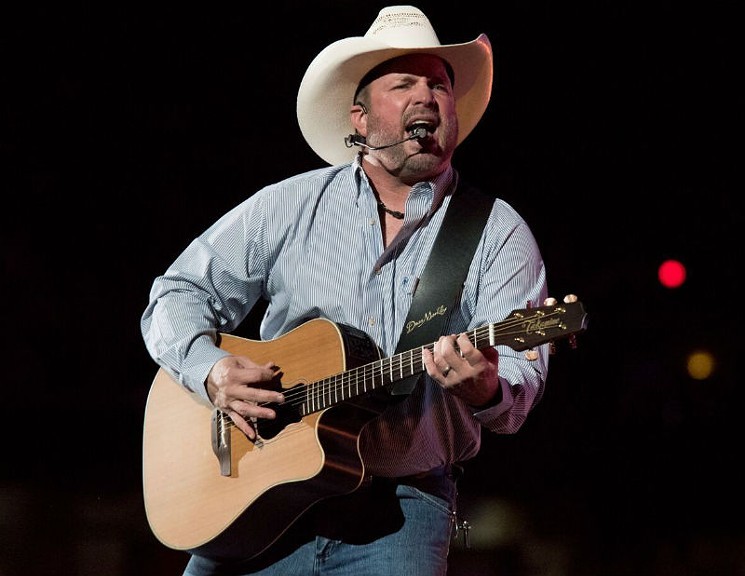 The consummate performer giving his all at RodeoHouston in March
Photo by Jack Gorman
Garth Brooks, NRG Arena, March 18, 2018
Garth Brooks was instrumental in developing my musical palette at a young age.

My mom (and all my friend's moms) owned all his records, so I've known the words to "Rodeo" and countless other Brooks hits since I could walk. Which made seeing Chris Gaines in the flesh a truly special night for both my wife and me.

The multi-platinum country icon serenaded a sold-out NRG Arena twice back in March. His set comprised only 13 songs, which was short by typical concert standards but impressive compared to most RodeoHouston set lengths.

Brooks was electric for the entirety of his set, feeding off the crowd's collective enthusiasm which peaked during the evening's penultimate track, "Friends In Low Places," making for one of my most memorable RodeoHouston experiences yet.

In the early 2000s, I had dreams of attending Ozzfest to see the likes of Incubus, Linkin Park, Marilyn Manson, Slipknot and System of a Down. Alas, my conservative parents wanted no part in Ozzy's dark aesthetic, and Ozzfest as I knew it ended before I was old enough to go.

This year, I had the chance to see Ozzy in the flesh, and he didn't disappoint. It was Ozzy's final world tour, or so he said. And at 70 years old, his retirement might just be legitimate this go-round.

The Rocket Man bidding farewell to the Yellow Brick Road
Photo by Violeta Alvarez
Elton John, Toyota Center, December 8, 2018
Growing up, my parents were mostly country music fans. I have very few memories of anything else being played in our house during my childhood. One notable exception was Elton John's "Crocodile Rock."

At some point when I was a kid, my mom played it for me and I remember being floored. I'd never heard anything like it. It was whimsical, upbeat and lacked any hint of the twang that colored so much of their preferred music. It opened my ears to pop music.

Ironically, John once told Rolling Stone that he hoped not to be remembered by the track. In a 1973 interview, he called it "disposable" and was quoted saying, "I wouldn’t like in 15 years’ time to still be playing 'Crocodile Rock.'"

Fortunately, John seems to have softened his stance since then. He performed "Crocodile Rock" in all its glory during his latest visit to Houston, and hearing it live was a surreal experience for me.
KEEP THE HOUSTON PRESS FREE... Since we started the Houston Press, it has been defined as the free, independent voice of Houston, and we'd like to keep it that way. With local media under siege, it's more important than ever for us to rally support behind funding our local journalism. You can help by participating in our "I Support" program, allowing us to keep offering readers access to our incisive coverage of local news, food and culture with no paywalls.
Make a one-time donation today for as little as $1.