Shaped By Fire: The Return Of As I Lay Dying 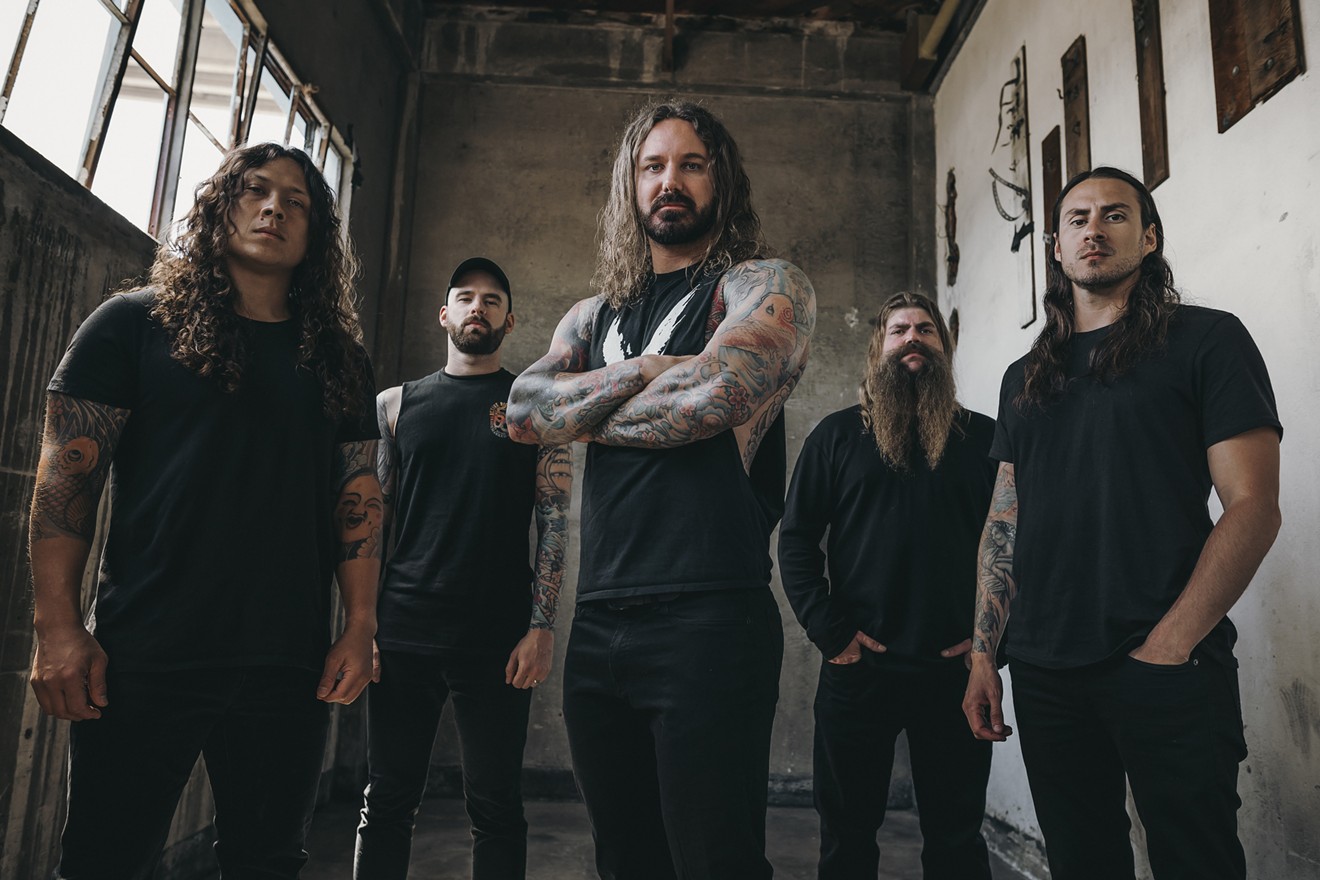 While the heavy metal world is often associated with the imagery of violence and gore, it also has characteristics that rely heavily on perseverance and redemption. Though the trials and tribulations of an uprising, “grimey” metalcore band can be countless, none have had quite the rollercoaster of ups and downs that San Diego quintet As I Lay Dying has endured.

The heavy metal group will be hitting the stage at House of Blues on November 19 and it will be their first Houston show in six years after lead singer Tim Lambesis’ arrest.

Lambesis was arrested in May of 2013 for solicitation to commit murder after he paid an undercover cop to kill his estranged wife. The singer was taken into custody three weeks prior to the group starting their tour with Massachusetts metal-masters Killswitch Engage. With their vocalist gone, the future of As I Lay Dying seemed uncertain.

After the unraveling of the situation and the detainment of their lead singer, the accompanying stress took a toll on the rest of the members of the band. Following a short period of time off to regroup, the remaining members decided to start fresh, forming the band Wovenwar with Oh, Sleeper vocalist Shane Blay in 2014.

Lambesis was released from prison in December 2016, just months after the release of Wovenwar’s second album Honor Is Dead. After his release Lambesis attempted to reach out to his former bandmates but was initially denied. Through months of rehabilitation, publicly taking responsibility for his actions, and volunteering as a case manager at an addiction recovery facility, Lambesis was eventually able to meet with his friends and begin to rekindle their relationship.

On June 8, 2018, As I Lay Dying released their first single "My Own Grave" with an accompanying music video, unveiling the classic lineup (vocalist Tim Lambesis, guitarists Phil Sgrosso and Nick Hipa, bassist Josh Gilbert and drummer Jordan Mancino) together for the first time since 2013 and signaling the end of Wovenwar.

“It was the first song we pieced together as a [reformed] band.” explains guitarist Phil Sgrosso “It allowed us to play our first show in San Diego and ultimately expand into doing a full album and going on tour.”
The release of the single marked a defining moment in the band’s history, showing that not only were they back, but that they, as a group, supported Lambesis’ return to the industry.

“I would say the process [writing "My Own Grave"] showed that after all that time and adversity, we could come back and come together to have a positive experience working on a song,” says Sgrosso. “It was definitely cathartic for everyone to just be like ‘Wow! Things have changed for the better.’ It was very rewarding and gave us a sense of accomplishment.”

Following the release of the single, the band decided to keep the momentum going, starting their first tour in five years, and began writing for their first album since 2012’s Awakened. While the initial reaction to the single was reinforced with positive reception by fans, others did not feel entirely the same. The band has had its fair share of backlash, mainly from groups claiming that Lambesis’ hasn’t had the time to prove that he has actually changed. Rock news outlet MetalSucks stated that they would no longer be writing about the band continuing forward.

Lambesis has openly acknowledged his understanding of these individuals' reaction and has extended his invitation to personally prove his changes through involvement with helping others. Lambesis obtained his certification as an addiction treatment counselor and is actively involved with helping those struggling with mental health and depression through August Burns Red vocalist’s Jake Luhrs' charity organization HeartSupport.

In May of 2019 the members of the band released a video title As I Lay Dying: Misery Evolving through Heart Support. The video detailed on what each individual felt after Lambesis’ incarceration and what had taken place throughout the band’s hiatus. Also revealing why some of the members of the band weren’t as quick to show support for their ex-frontman.
The album and title track Shaped by Fire is a declaration that the band has been altered and “shaped” by the events of the previous years but are overcoming the adversity and obstacles that have been brought by them.

"My Own Grave" is a rumbling track that begins with clean guitars that ultimately builds into blasting high tempo segments with lyrics of Lambesis admitting his faults.

The lies, the weight / It’s clear I’ve lost my way

As well as a harmonizing chorus as bassist Josh Gilbert helps in sing:

Buried inside of my own grave / And there’s no one else to blame.

"Redefined", the eclectic track that includes blast beats, chanting head-bobbing interludes and incredible production, has Lambesis proclaiming that he wouldn't alter the past because he needed to change.

“We wanted to capture the familiar element that our fans know us by” discloses Sgrosso, “But also incorporate a very modern approach, a lot of things change after seven years, the scene changes, the trends change  — not that were trying to keep up with trends but were definitely excited by newer sounds.”

Shaped By Fire Artwork
Courtesy of Nuclear Blast Records
The band took on the endeavor of not only writing but producing the new album themselves. Everyone's full involvement throughout the recording process seems to have tightened their skills and overall orchestration as a band. Shaped by Fire sees some of the most technical instrumentations the band has embarked on as well as amazingly harmonizing choruses throughout the entirety of the project.

Supporting the release of the new album the band has been on a continuous tour. “It’s been non-stop since September,” says Sgrosso. “Before Europe we played Russia and South America right before that.”

Some resistance remains; in late 2018 the band was dropped from the lineup of Resurrection Fest, a popular rock festival held in Spain, as well as a canceled show in Memphis, Tennessee earlier this year.

The band begins the U.S. leg of the Shaped By Fire Tour November 15 in Las Vegas, Nevada and will spend four weeks on the road with progressive metal band After The Burial as well as fellow metalcore group Emmure.

“It’s pretty much been the longest headlining set we’ve done. We have a full range from our entire catalog and we’ve thrown in some of the new songs so it keeps us on our toes," Sgrosso says. "There’s a couple of more things we might add in but those are saved for a surprise.”

It has been seven years since As I Lay Dying has been to Houston, last stopping here as part of the Rockstar Energy Mayhem Festival in 2012 supporting acts such as Slipknot and Slayer.

“Yeah, that sounds about right,” says Sgrosso “Some of us may have been back to Houston with other projects and bands but with As I Lay Dying its been a while. Hopefully it will be an exciting return for the fans as well as us! We’ve always loved playing Houston, we’ve had some awesome shows there and we’re definitely ready to get back!”

As I Lay Dying headlines the Shaped By Fire Tour at 6:30 p.m. November 19 at House Of Blues 1204 Caroline with After The Burial and Emmure. For more information, visit houseofblues.com/houston or asilaydying.com Tickets $27
KEEP THE HOUSTON PRESS FREE... Since we started the Houston Press, it has been defined as the free, independent voice of Houston, and we'd like to keep it that way. With local media under siege, it's more important than ever for us to rally support behind funding our local journalism. You can help by participating in our "I Support" program, allowing us to keep offering readers access to our incisive coverage of local news, food and culture with no paywalls.
Make a one-time donation today for as little as $1.