“Hi Tall Texan Family, this damn Coronavirus has got us, and got us bad. We are deeply saddened to say Alice’s Tall Texan will close permanently at the end of August after 36 years in business,” the post reads. “There’s just too much working against us.”

Unlike many of Houston’s other dive bars, Alice’s Tall Texan Drive Inn was not really considered seedy or at all dangerous; it’s the kind of place you could even take your mother to go have a beer with and feel perfectly comfortable at. A woman-owned business, Alice ran the place all these years and is very nice; you just didn’t upset her by putting your feet up on her tables or cursing loudly. And she did not permit sleeveless shirts; it was not that kind of divey.

Alice’s felt more like a small Texas town watering hole than a bar in Houston in many ways; it will be remembered as a very friendly, welcoming place no matter what your background or age was. It was the kind of place where strangers offered to buy you beers all night with no ulterior motives and the regulars brought in homemade food to share.

Alice’s Tall Texan on July 15, 2014.
Photo by David Rozycki
For many years the old jukebox at Alice’s was packed with classic country favorites and was later replaced with an internet model, but many of the regulars still played those old-time favorites up until the very end. It wasn’t the kind of place where people played Nickelback, thank goodness. The Tall Texan's large Hispanic clientele also liked to play salsa, Tejano, and norteño as well, which was not available on the old jukebox.

Alice’s can still use your support right now. They will be selling singles, 6-packs, 12-packs and cases-to-go and with every purchase of a 6-pack of more, you will have a choice of a souvenir chalice or beer mug to keep; plans are also underway to sell draft beer to go in growlers, as well as memorabilia from the bar later in August. If legally possible Alice’s would also like to give all of their customers one last chance to stop in and have a beer inside so watch their Facebook page for details.

“Lastly, we want to say THANK YOU to all of our customers, employees and business partners for the past 36 years. Y’all are the reason we became known as a great dive bar, best place to drink if you’re broke, friendliest bars…we are eternally grateful to have been a part of your lives including the countless celebrations or allowing us to lift you up when you were down,” the Facebook post concludes. “ALICE’S TALL TEXAN IS NOTHING WITHOUT ALL OF YOU. We love you and thank you from the bottom of our #chALICES!”

Even more sad breaking news for those hanging on to any hope is that Alice has received word from her landlord that they have new plans for the space and are not entertaining any possible offers to buy or take over the bar. The year 2020 continues to break all of our hearts. 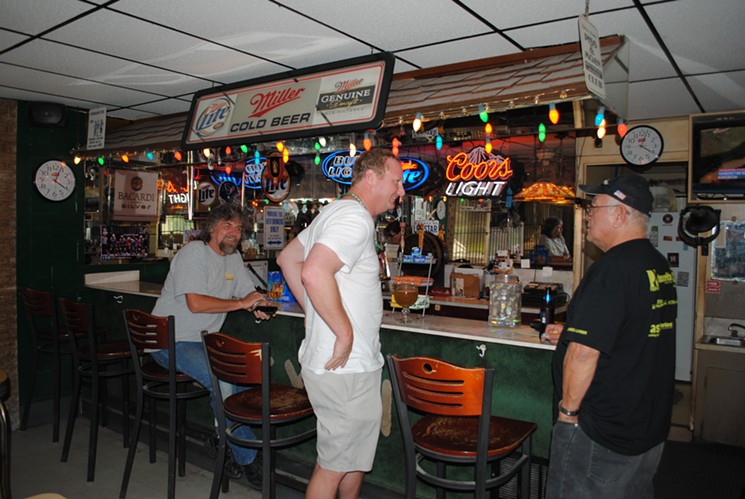 In August you can buy one of the beer signs pictured here or other memorabilia inside the bar as a souvenir and remembrance.
Photo by David Rozycki
KEEP THE HOUSTON PRESS FREE... Since we started the Houston Press, it has been defined as the free, independent voice of Houston, and we'd like to keep it that way. With local media under siege, it's more important than ever for us to rally support behind funding our local journalism. You can help by participating in our "I Support" program, allowing us to keep offering readers access to our incisive coverage of local news, food and culture with no paywalls.
Make a one-time donation today for as little as $1.
David Rozycki
Contact: David Rozycki