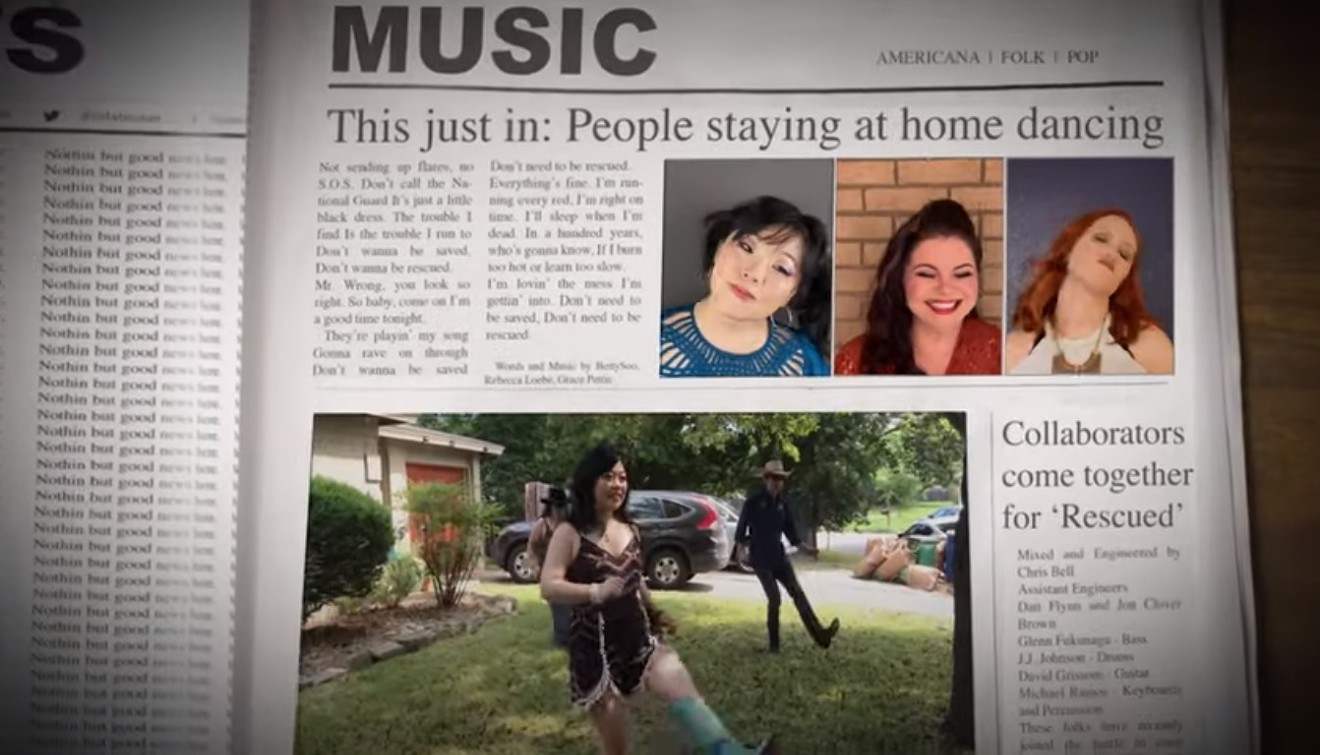 Here are the top ten! Screencap from Nobody's Girl's "Rescued"
And now for the 10 best music videos of indie and underground acts we saw in 2020.

Austin’s own Nobody’s Girl shows how you can take a very simple idea and turn it into something amazing. Rather than lamenting the fact we’re all trapped in our houses, they use clever video editing to rally our hearts for dancing at home. This is just one of those music videos that makes you feel instantly better after seeing it.

So few animated music videos actually strive to have their own distinct art style. Most of them tread comfortable paths set out by the pioneers in the genre. That’s not what’s happening in “Plasticine Dreams.” Director’s Jason Bacon and Rob Shaw made a stylized adventure that honestly feels like a twenty-first century Gerald Scarfe minus the butts. As a man leaves prison to walk the streets of a consumption-obsessed city, he becomes disillusioned. Seeing a cow carve off a piece of itself to sell you a burger will do that to you.

The platonic ideal of a plague year music video comes from Houston’s own Erin Rodgers. The Glass the Sky multi-instrumentalist has a new endeavor called National Treasure that is the best of her long career so far, and “Endgame” is a complete banger that is accompanied by a killer music video created by T Lavois Thiebaud. It’s a surrealist parade of weird masks, dead brides playing clarinet, and empty fields. Done with an artistic eye for the madness and desolation of 2020, it’s the best of an entire sub-genre of quarantine art that so many bands have had to embrace.

Director Colin Read has made a music video that all other directors should study. “Broken Eyes” is pop perfection as it uses a clever rotating set to show a man going through a brief, anxiety-driven mental break when his significant other breaks up with him. Yes, there’s a lot of your typical sad man rage, but it all comes back together when the video reverses itself and deposits the man of his visions back into his body with time still left to aver the future. It’s heartwarming and so well done.

So, Danny Elfman is doing pop music again suddenly, and while “Happy” is not “Dead Man’s Party” it is still a song worth paying attention to. Not the least because it comes with a very disturbing music video directed by Aron Johnson. Elfman screaming at us out of the darkness over footage of disembodied hearts is certainly a mood, and it feels oddly appropriate right at this moment in history. Welcome back, sir!

“Lights On” is a cinemaudio masterpiece of storytelling that absolutely riveting to watch. Shot entirely in a single shot played in reverse, director Jack Begert follows a hold up at a strip club that is three minutes of pure action brilliance. Plus, Danny Trejo shows up. Few music videos have ever so perfectly captured the capabilities of the genre the way “Lights On” does.

Take a butthole joke, add in incredible science facts, get some backup dancers dressed like Sailor Moon characters, do the whole thing completely straight-faced, and you end of with one of the greatest music videos ever made. “Uranus” made me so very happy. I am very glad I can watch “Uranus” over and over. You as well, should see the glory of “Uranus.” I am not sorry for any of these jokes.

“Bernie Sanders” comes closer than anyone has to recreating Metallica’s “Unforgiven,” which is a very odd sentence to type. Directed by Jordan Hemingway and starring “Peter Lidell,” a man completes a strange, bloody ritual in a small room only for him to rage against the walls as they close in. It’s impeccably acted, horrific to witness, and a complete masterpiece. Every awful second is beautiful.

The best of the animated music videos this year is definitely the cyberpunk epic that is “Push.” Created by Dhimanth Rao, Francis Dylan Collard, and Piya Pahwa, every single frame is a painting. Granted, a wet, hot, somewhat hopeless painting, but it’s been that kind of year. It’s inarguably a feast for the eyes.

The best way to describe director Tim Hyland’s interpretation of “Baby I Need a Driver” is “If Midsommar was a love story instead of the exact opposite of that.” Set against a nature cult, two members who fall for each other try to leave. The build up to the heartbreaking climax is one of the best minutes in music video history and will cause your soul to leave your body. Things this lovely should not be so horrifying, but the fact that it can be is why it's the best music video of 2020.

Thanks so much for being with us. Here's to a new year full of even better videos!

The Best Music Videos of 2020 You Probably Missed:
Part 1: 50-41
Part 2: 40-31
Part 3: 30-21
Part 4: 20-11
KEEP THE HOUSTON PRESS FREE... Since we started the Houston Press, it has been defined as the free, independent voice of Houston, and we'd like to keep it that way. With local media under siege, it's more important than ever for us to rally support behind funding our local journalism. You can help by participating in our "I Support" program, allowing us to keep offering readers access to our incisive coverage of local news, food and culture with no paywalls.
Make a one-time donation today for as little as $1.