Brightwire Brings It All Together for New Album 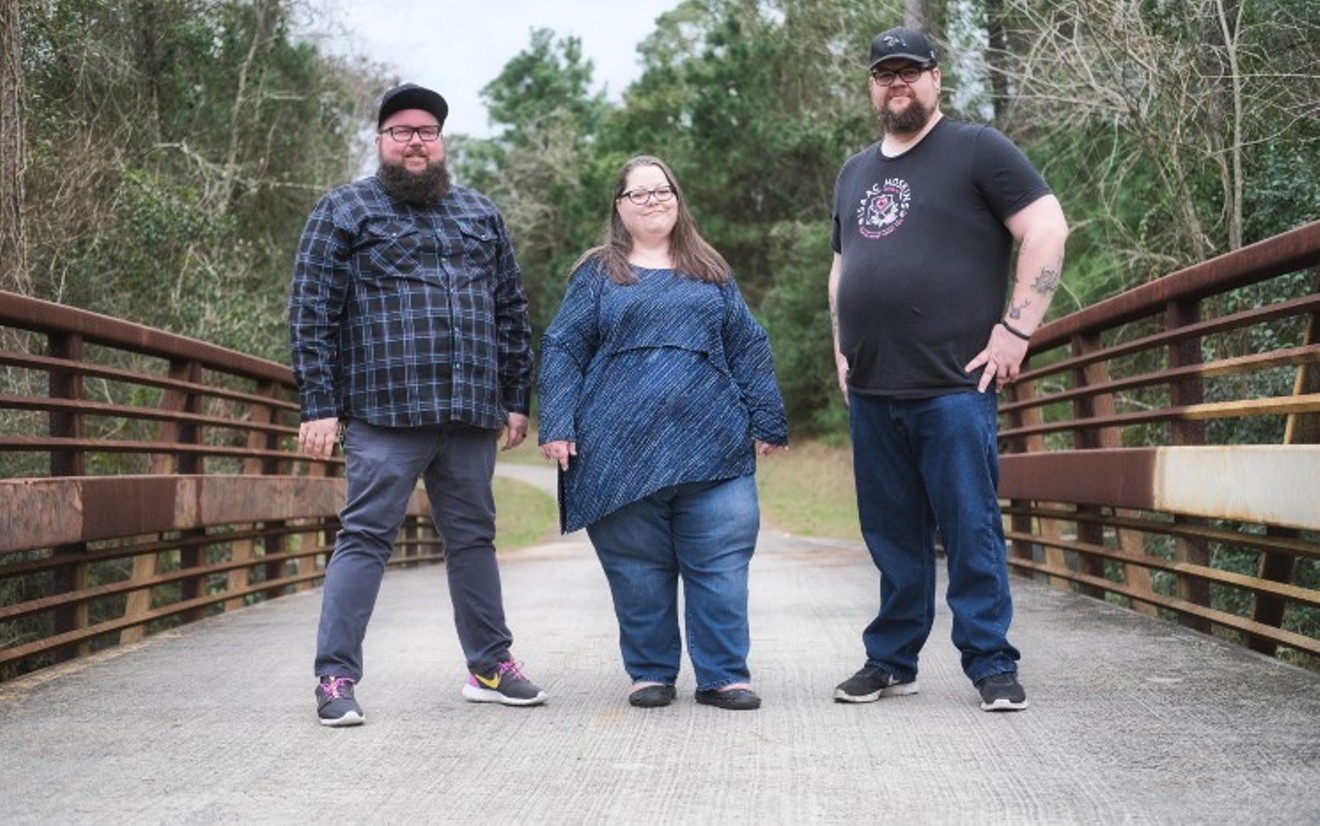 Brightwire Photo by John and Rebecca Stoll, courtesy of Brightwire

The old adage says a union is more powerful than the sum of its parts. That message is at the heart of Cracked, Flawed and Frayed, the new album by the Houston band Brightwire. The record’s 11 tracks espouse togetherhood and feel very timely as we emerge from the solitude of COVID quarantine to a world of awaiting family and friends.

Samuel and Kimberly Barker, the husband and wife who founded the Americana trio, released the album on March 11, their wedding anniversary date.

“March 11 last year, on our anniversary, was the day that kind of everything went to hell, like the CDC came out and made (coronavirus) a pandemic. Rudy Gobert got sick and the NBA cancelled its entire season. Between dinner and drinks that night the NBA season was cancelled and everything totally flipped on its head,” Sam recalled. “We figured it’s cute that it’s our anniversary but it’s also the day that everything hit the fan last year. We thought we’ll just (release the album) March 11 his year and reclaim that date for something better than just when the pandemic blew up.”

They reclaimed it in a big way, with music that sounds more lush than one might expect from a trio and their talented friends who appear on the album. In some ways, the music is an ornate backdrop for Kim’s voice. Powerful as it comes through on the new album, it was nearly never heard. The Barkers were married in 2017 but met only a couple of years earlier. By then, Sam was well known in Houston music circles. He was a member of the Front Porch Society, the cabal of singer-songwriters which traded tunes and stories at McGonigel’s Mucky Duck. That’s where he met Huke Green and formed the alt-country duo The Wayward Sons.
Kim grew up singing in choirs in church and high school. After graduation she stopped singing except for the occasional karaoke night.

“And then I met Sam in 2015 and I knew he had a band, I’d seen him play with his band before,” she shared. “When we started going out, I just started listening to his music a lot, obviously. He was a single father at the time and if he wasn’t working he was gigging, so the only way we got to hang out was if I went to shows. So, I listened to a lot of his music and just kind of started singing along with it.”

She fell into performing again, first by singing backup on Sam’s last solo album.  When Sam started recording an album for his friend Ben Hall, Kim did backing vocals and Sam became convinced she should step into the spotlight as a lead vocalist.

“We were traveling together and she would get up on stage and sing the songs that she did harmony vocals on, then she wrote a couple of songs. After that, it didn’t make any sense to be solo, so we came up with the Brightwire name.”

Cracked, Flawed and Frayed is the band’s second album in four years. This one features friend and new-ish band member Michael “Helf” Helfenstein, who knew the Barkers from sharing bills with them as a member of The Grizzly Band. When that group disbanded, he joined Brightwire full time and further expanded its sound with dobro and steel guitar.

“He’s real musical. That’s one thing I feel is a good thing for us, me and Helf, we’ve both spent time as sidemen with people,” Sam said. “I think we kind of click together.”

Sam sings on the album too but, as he explained, Kim is the trained singer. He said he doesn’t crave the spotlight. He’s interested in what propels the song as a whole and he said Helfenstein shares that ethos. The Barkers said "Helf" has a similar sense of musical direction, a kindred sense of humor and a personality akin to theirs.

That’s also a succinct summary of the themes at work in Cracked, Flawed and Frayed. The songs are reminders that we have individual imperfections but joined together we can create something whole and inspirational. Sam said the oldest song on the album was written about 12 years ago, but many were written more recently and, he feels, they all benefitted from the forced downtime during 2020.

“Really, the world stopped a year ago so we were just sitting at home. It sounds cliché at this point but it’s really what it was,” Sam noted. “At first it was exciting, we had all this free time and then everything just ground to a halt.”

The quarantine blues were compounded by some close-to-home tragedies for the Barkers. Sam’s nephew died last April. Negativity was peaking and Sam said, “I needed something to focus on, so we started going through some old solo songs that had never really seen the light of day and we’d already written probably half the album heading into it.”

No longer able to play shows, they used the slowdown to take a methodical approach to recording. Click tracks, acoustics layered over them, bass parts next, drums “and then everyone else started coming in,” Sam said.
Everyone else included Hall, who co-wrote two of the album’s tracks, “Tears Through the Sunshine” and “The Righteous Hand.” Sam said Hall passed away in February after a battle with cancer, but his spirit lives in the music. Liz Sloan McGovern of the Urban Pioneers added fiddle and violin and John and Rebecca Stoll, better known as Grifters & Shills, were instrumental to the album, with John playing several instruments on the tracks. The Stolls mixed and mastered the final product.

Sam said every album he’d ever previously recorded was devoted to capturing the music as it should sound live. This was a departure, “built from the ground up, piece by piece,” he said.

“Because we had the time,” Kim added. “I just remember Sam kept saying, ‘This is the album that I always wanted to make.’”

They started recording in July 2020 and were done a few months later when Daniel Torres, a friend and Galveston-based artist, added the album’s cover art. March 11 was the record’s official digital release and the Barkers are awaiting vinyl pressings, which were delayed by the pandemic and February’s freeze. They’re hoping to have the albums on hand when they return to live music, hopefully late this summer.

“It just still doesn’t feel like time for us to get people all gathered together,” Sam said.

That does give folks time to order the vinyl from Bandcamp or learn the new music from streaming music sites. Sam believes listeners are going to hear songs they’ll feel attached to as we return to form from a challenging year.

“I grew up over in Bolivar Peninsula. My graduating class was 15 kids, we didn’t have a lot of people. So music was my big thing to know that all the craziness in the world, there were other people everywhere experiencing this stuff,” he said. “So it was always important, that was always my thing with the songs we do, I just always want to have something that people can relate to. Like (the song) ‘Cracked Edges,’ – yeah, we’re all a little messed up, we’ve all been beat up by life, it’s nothing to be ashamed of.”


“I think that was kind of our purpose, our goal through all of this was to capture the moment,” Sam continued. “Even though some of the songs are older, the theme of making it through a little beaten up – and again, like I said, my nephew had died in April - we just had this kind of (idea), no matter how messed up we all are, we’ll make it through this. It was a community effort bringing our friends in, having John and Rebecca involved and Liz, all these people we actually knew and people that we liked.”

“It makes it feel better to listen to,” he said. “All of our friends really came together to help us make something we’re pretty proud of making.”

“Sam’s had this music community for a long time and I really only met most of these people five, six years ago. All of these people we worked with on the album, they’ve influenced me musically. They let me figure out what my voice is on this album,” Kim said.

She said she was particularly inspired by the Stolls, a fellow married, musical couple.

“I love working with John and Rebecca just because we’re all very like-minded,” she said, “and, they are really, really talented. Just the fact that they let us hang out with them and let some of that talent rub off is always nice.”

“I think it helps too, being married, weird as it may sound, because you’re a little more open on things. I’ve been in bands where if something happened with a song creatively, where I may not be the principal songwriter and we’re working it out and it’s like, man, this just isn’t working, but you’re always kind of scared to say anything,” Sam said. “When you’re married it’s a little bit easier, you’re a little more comfortable (saying), ‘Hey, why don’t we try it this way?’ or ‘Why don’t we do this?’"

“I think it helps that we both love music so much,” Kim added. “Music, for us, hasn’t been a catch like in some people’s marriages. It’s been more of a release for us. It’s something that we’re going to do every day, whether it’s sitting around the living room fiddling around with guitars or watching him write a song at the coffee table and him letting me read the lyrics and giving my opinion, it’s just kind of built into our everyday. It’s nice.”
KEEP THE HOUSTON PRESS FREE... Since we started the Houston Press, it has been defined as the free, independent voice of Houston, and we'd like to keep it that way. With local media under siege, it's more important than ever for us to rally support behind funding our local journalism. You can help by participating in our "I Support" program, allowing us to keep offering readers access to our incisive coverage of local news, food and culture with no paywalls.
Make a one-time donation today for as little as $1.