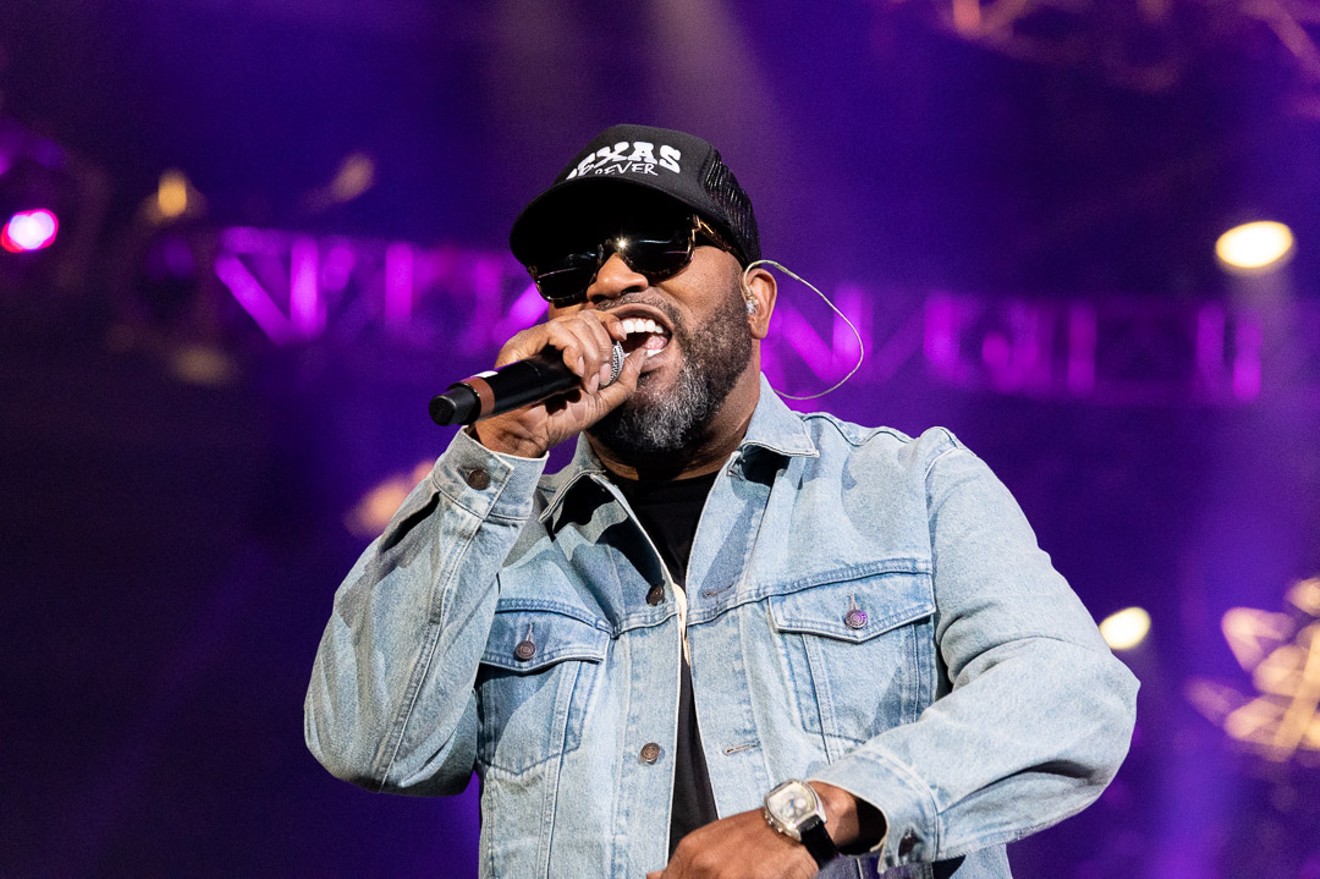 Bun B headlined the Texas Takeover Friday night at NRG Stadium Photo By Jennifer Lake
The sound of the crowd roaring vibrated off the cinderblock walls as fans in NRG Stadium jumped to their feet. Three candy-colored slabs rode through the dirt around the rotating, star shaped stage, kicking up dust as their drivers hit switches making them jump and pop trunk. E.S.G stood proudly in the center of the star as pictures of DJ Screw, H.A.W.K, and Big Moe flashed above him on the stadium’s gigantic screens. E.S.G, having just performed “Swangin and Bangin”, transitioned into “Tops Drop” by Fat Pat, ran to the top corner of the stage and urged the crowd to jump to their feet.

“Bun got them to bring the slabs out,” he laughed as the music died down and the lights dimmed. “Y’all ready?”

Almost simultaneously the haunting voice of Ofra Haza played distantly through the speakers and drifted across the stadium. The crowd screamed as the all-too-recognizable sample of Im Nin’Alu played over Dennis Edwards and Siedah Garrett’s breakbeat from “Don’t Look Any Further”. If this was New York, fans might be expecting Rakim & Eric B’s “Paid in Full,” but this is Houston and the almost 80,000 attendees in the stadium knew what was about to occur. As Z-Ro walked out onto the stage, dressed sharply in a pinstripe suit, the sold-out stadium rapped along with the “Mo City Don Freestyle”.

It’s been two years since the pandemic hit and began to shut everything down. For the nation, the signs it might be serious occurred when the NBA shut down right before a game started. For Texas it was probably when SXSW made the announcement that the event was not happening that year.

But for Houston, the announcement that the rodeo had to stop after just being open a few days was the surprise that something serious was happening. But in 2022, the crowds are back out to NRG Stadium. Very early on it was announced that RodeoHouston would be back bigger and better in 2022 and one of the ways the group wanted to do that was with the help of Bun B.

The Port Arthur native has been a staple in the Hip Hop community since bursting on the scene with his partner Pimp C in the rap duo UGK. Since 1992, Bun B has been supplying Hip Hop fans with hard hitting lyrics over southern beats, and, as he has moved toward veteran status in the industry, he has branched out his career to more than music.

Bun B He is a faculty member at Rice University, lecturing on the Humanities of Hip Hop and Religion. He has released children’s coloring books. He is one of the backers of Trill Burgers, a vendor that is featured at the Rodeo. Most of all he is a supporter of the Hip Hop community here in Houston as well as Houston in general. Whether working with Reading With A Rapper to help improve child literacy, spearheading a national telethon to raise money for hurricane victims, or going door to door with Trae Tha Truth handing out supplies in the Golden Triangle following a storm, Bun B has rightfully earned the title of Houston’s unofficial mayor. Even the current mayor thinks so.

LeToya Luckett hit the stage in support of Bun B.
Photo By Jennifer Lake
Bun B’s H-Town Takeover was announced back in September with a video including the Port Authur MC, the President & CEO of the Houston Livestock Show & Rodeo, and Mayor Sylvester Turner. In the short, Bun exclaims his passion to put together an amazing day for the rodeo’s Black Heritage night while also showcasing Houston’s rich culture of Hip Hop. What started out as an already large list with Paul Wall, Slim Thug, Ll Flip, Lil Keke, Z-Ro, Baby Bash, Frankie J, Big Pokey, and H-Town quickly ballooned up with the addition of Devin the Due, Tobe Nwigwe, That Girl Lay Lay, LeToya Luckett, E.S.G, Willie D.

Bun delivered that and more bringing out Chamillionaire to perform his major label debut hit “Ridin”. The show was not only a showcase of Bun B’s thirty-year career but a celebration of Houston Hip Hop. It is a history whose influence is often overlooked and downplayed, but Bun B’s show helped to display the power, diversity, influence, longevity, and richness of the city’s musicians. Whether it was a medley from the Screwed Up Click, the trading of verses between Swisha House’s Paul Wall and Slim Thug, an opening performance from Nickelodeon star That Girl Lay Lay, lyricism from the husband-and-wife team of Tobe and Fat Nwigwe, or a classic verse from the Geto Boys Willie D, Bun B’s Texas takeover showed the importance of Houston Hip Hop.

Who could imagine years ago that Devin The Dude would be rapping and singing “Doobie Ashtray” in front of an audience at RodeoHouston? Or Baby Bash and Frankie J would have that same audience singing along to the lyrics of “Suga Suga”? There is a person that can be credited with having the imagination to picture a wave of music coming out the city and Bun made sure to bring him out.

Slabs rode around the stage showcasing another aspect of Houston Hip Hop history.
Photo By Jennifer Lake
“Back when I started this movement, I could never imagine we’d be at the Houston rodeo,” exclaimed Rap-A-Lot’s J Prince standing center stage in full cowboy regalia. “This is the Houston Rodeo. This is big.”

It was a big moment that wasn’t lost on Bun B who enthusiastically hugged his wife, Angela, and thanked the crowd.

“I love you Houston and I love everyone that is on this stage!” he yelled before the two of them hopped in the back of a truck and rode away from the stage while UGK’s International Players Anthem played them out.
KEEP THE HOUSTON PRESS FREE... Since we started the Houston Press, it has been defined as the free, independent voice of Houston, and we'd like to keep it that way. With local media under siege, it's more important than ever for us to rally support behind funding our local journalism. You can help by participating in our "I Support" program, allowing us to keep offering readers access to our incisive coverage of local news, food and culture with no paywalls.
Make a one-time donation today for as little as $1.