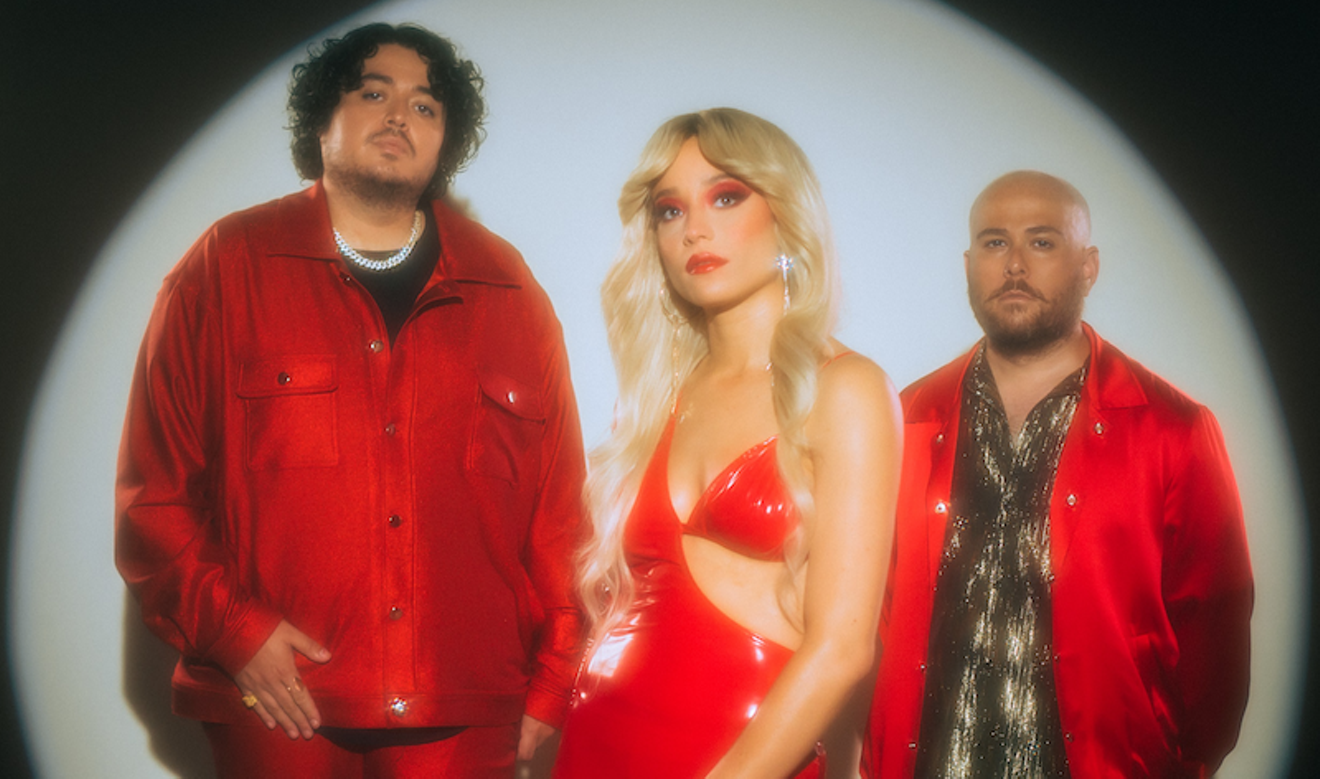 Electro alt-pop trio Cannons is set to play a sold out show in Houston at The Secret Group on Friday night in support of their new album Fever Dream. Photo by Ryan Rundle
Hurricane season might still be a few months away, but electro-alt-pop trio Cannons is on track to make landfall at The Secret Group this Friday night. Expect gusts of heavy synths, a downpour of hypnotic melodies, and a surging dance floor when the Category Five storm, helmed by lead singer Michelle Joy, guitarist Ryan Clapham, and drummer Paul Davis, hits the stage in support of their new album Fever Dream.

Fever Dream, out now on Columbia Records, is the kind of career propelling record that bands pine for, fans crave and cherish, and playlist curators salivate over. Cannons’ canon rests on a bedrock of soul-struck dance, guided by shimmering synths and simmering rhythm guitars, and American balladry, as if time traveling from a forgotten '50s diner jukebox to the band’s playground of chameleonic reference points. Fever Dream paints its sonic palette with cinematic ambition, scaling its magnetism to both festival stages and intimate settings, like the clubs and theaters the band is currently headlining. All this to say: you just can’t take your ears, or eyes, off of them.

“Hurricane,” the fourth single from Fever Dream, makes sure of that. The intro’s surf guitar and devilish whistle all but forebode the tracks’s threatening chorus: I’m coming back like a hurricane. When Michelle Joy sings it on the record, you kinda get the feeling she’s not kidding. The idea of Cannons performing “Hurricane” just 50 feet above sea level in Houston might sound triggering, but Joy says the song uses the natural disaster concept as a “symbol of power.”

A few days before the album dropped, Joy spoke with the Houston Press via Zoom about Fever Dream, “Hurricane,” and her own experiences with hurricanes in Florida, adding an extra layer of flooded-street cred to the song that, she says, “gets crazier and crazier [at] every show.”

“I remember just being terrified. There was a little closet under the stairway which my parents said would be the safest, so I hid in there a lot. I've been through so many hurricanes, I mean when I was younger, too. I just remember the streets being flooded and taking little boats down the street. Since I'm from Florida, there's water moccasins and alligators in the front yard. Crazy times. But the scariest time was definitely when we didn't board our windows properly and they broke open upstairs in the house and wind was blowing through — so we held mattresses up against the wall with my mom for hours. [We] made it through quite a few natural disasters.”

“Hurricane’s” accompanying music video is a beast to behold; how it and the song converse with each other embodies the classic definition of music video: a pairing of fully developed musical and visual offerings comprising a moment greater than its individual components. In the video, Cannons, centerstage in the eye of their storm, deplores their telekinetic meteorological powers to summon wind and fire on a soundstage. The concept, Joy says, was inspired by the 1984 film Firestarter starring a young Drew Barrymore, whose character — the pyrokinetic spawn of telepathic parents, subjects of a government experiment — breaks out into nosebleeds after setting shit ablaze. Joy, too, busts a blood vessel or two as her power strengthens, but she does it in style, clad in a blood-red piece reminiscent of Selena’s iconic purple jumpsuit from her final Houston Livestock Show and Rodeo concert.

Cannons’ fashion statements seem to be evolving in real time alongside their discography; Joy’s sequin dresses and shining jumpsuits hark back to ‘70s and ‘80s musings. She says that, growing up, she was drawn to artists who “weren't just wearing something comfortable that they would wear around the house.

“They would put a lot of thought and effort into their look, and they also looked the way they sounded. So you could look at them and be able to figure out what they might sound like. I really wanted to do that with Cannons,” she says, citing Michael Jackson, Donna Summer and Tina Turner as totemic touchstones in her music and fashion pantheon.

“On the last tour, actually, we played [“What’s Love Got to Do With It”] every single time we got back in the tour bus because we were driving and that song pumped all of us up.” Joy affects the song’s title in Turner’s unmistakable punctuated rhythm: What’s love…Got-to-do!

“I recently watched that documentary on HBO and it was just really inspiring to me and she is just incredible. That documentary actually had me in tears by the end of it.” Joy says that as a woman of color, she found inspiration in Turner’s determination to climb the charts and sell out stadiums typically filled by male-fronted rock acts.

“Tina did make me think about it a little bit in a different way because I wasn't even realizing how rare and difficult that is to get up to the top of these charts, especially just as a woman in general too,” she says.

“A lot of people don't know I'm half-black; my father is from Trinidad. I know [on the] alternative charts there aren’t that many women on it and then there aren’t that many black women on it… I'm not represented too much in it,” says Joy. Being nominated for Best Alternative Artist at the iHeartRadio Music Awards the day of our conversation made Cannons’ representation in the category that much more meaningful for Joy.

Like the band’s name would suggest, they are indeed blowing up on the charts. Fever Dream entered the iTunes Alternative Albums chart at No. 3 the day of its release; Dream lead single “Bad Dream” peaked at No. 3 earlier this year on Billboard’s Alternative Airplay Charts; 2019’s “Fire for You” reached the summit of the same chart in early 2021. Though charts aren’t the only success metric for an artist, marking their bullseye proves a tangible arrival point for a band that’s been on a traditional trajectory: independent band with star potential signs to a major label; develops its live act; adds fire to the flame with a Netflix song placement. “Fire for You” being placed in Mindy Kaling & Lang Fisher’s Never Have I Ever, Joy says, might have been the biggest advantage the pandemic imparted on the band’s success.

“During the height of the pandemic when everyone had to stay at home and everyone was on their couches watching Netflix, the number one show at the time decided to use our entire song at the most important part of the show. So that shot our song ‘Fire for You’ up to number one on Shazam and number one on [TV Songs] Charts, and that changed our lives around completely. It was a very crazy experience for us.”

It’s a fairytale dream that COVID nightmares are made of. None of the group’s members, including guitarist Ryan Clapham and drummer Paul Davis, evaded the twisted fantasy’s darker plot points of losing full time jobs and being more concerned with paying the bills and putting food on the table than writing new music. About a month into the shutdown, though, Joy says bandmates Clapham and Davis sent her a track that would later become Fever Dream highlight “Bad Dream.”
“When you're going through a difficult time, sometimes you don't want to hear someone say ‘It's going to be fine,’ when nobody knows if it's going to be fine. You just want to hear someone be like: this is shitty. This is shitty.”

“Bad Dream” has already outlived its quarantine context, but it still manages to capture every corner of it. The kick drum pulses like an elevated resting heartbeat, more noticeable at home in its stiller silence; the verses’ bass line vacillates between two notes, only emulating motion. Joy’s restrained vocals teeter toward numbness as the lyrics elucidate COVID’s disruption of sleeping and dreaming patterns during shutdown. On the track, Joy sings: I been living in a bad, bad dream / I wish that somebody would wake me / Don’t like this feeling won’t you shake me / ‘Cause any more might break me.

“I just wanted to express the feeling of not feeling good where you are right now. That's the situation and there was no resolution with the lyrics.”

The Los Angeles based band continued working remotely during quarantine - a process they were primed for since their early days when they met on Craigslist in 2013. Joy says that in those prescient beginnings, Clapham and Davis would email her tracks, then she would write and record vocals and send them back to the guys. Everyone’s differing schedules made collaborating in-person a challenge, but that all changed when Joy convinced the guys to move into her apartment complex.

“That's when we really had this little fire going because then we could meet up whenever and it made it a lot easier to work on music.”

Their consistent output since their 2014 debut has yielded a prolific discography of three EPs (Up All Night, In a Heartbeat, Covers by Cannons), three LPs (Night Drive, Shadows, Fever Dream) and a multitude of singles that warrants a well paced deep dive. Having seen their music’s effect on its audience, and at this burgeoning moment in their career, Joy believes that the music now belongs to the fans.

“I transfer it off, give it to the fans, and I hope it connects with them and is there for them for whatever they need. Which is good because on this tour…we've done meet and greets, so we've been able to talk to some of our fans and hear some really powerful stories about how our songs have affected them. It makes me really, really happy to be able to aid people in tough times, healing processes, different things they're going through,” she says.

“I just hope that people can find a piece of themselves inside of it and relate to it. It always comes from the heart, so it seems like if it comes from the right place - which it has been - then our music connects with other people, and that's a good feeling.”

Cannons plays The Secret Group on Friday, April 8 with support from Madi Sipes & The Painted Blue and Jane Leo. Doors 8 p.m., all ages. The show is sold out, but you can sign up for the waiting list should any new tickets become available.