With the true return of live music at a standstill, we can only look back to events like Satellite's Castle Christmas—an all-encompassing melting pot of both music and community (Divino Niño pictured here). Photo by Connor Fields
For many of us, this pandemic has entirely redefined the process of yearning. Where we once yearned for often unrealistic things that we hoped we would one day be able to do, we now find ourselves yearning for everyday simplicities that were at our fingertips just months ago—a pre-pandemic life, where we could visit whoever we please, where we could walk unfazed into Whataburger for a late-night meal, where we could happen onto a random bar and catch live music, where we could experience that music in the way it’s meant to be seen and heard, not through our screens.

As someone who has been fortunate to avoid the far more serious repercussions of COVID-19, much of my yearning process has revolved around this last question. When will we get to see live music again? When can I again experience that anticipatory feeling of my favorite band announcing a tour, or simply waiting in a line for doors to open? When will my friends in the live music industry once again have jobs?

Like many music obsessives, this torturous process of rhetorical longing has gone on continuously in my head over these last nine months, as I think not only about the many shows that I was a part of before the shut down, but also the many that missed—those that I foolishly told myself I’d have many more chances to experience.

Of all of my looking back, no event in the last 12 months has taken up more headspace than Satellite Houston’s “Castle Christmas.” Falling just a week before the start of 2020, Satellite’s inaugural holiday-themed festival perfectly encapsulated what a live music event can be, from the audience interplay, to the community outreach, to the music itself. The electric energy of Wild Moccasins' Zaharia Gutierrez guided the festival into the night, where crowd interaction would only intensify.
Photo by Connor Fields
The festival featured a full day of artists, from a variety of indie rock’s best (Beach Fossils, Inner Wave, Divino Niño, Holy Wave, and Mamalarky), to the best of Houston’s own (Wild Moccasins, Mind Shrine, Brother Sports, Mantra Love, Glaze, and John Allen Stephens). Adding a thematic component, each artist had at one point or another previously graced the stages of Satellite, therefore creating a “Best Of Satellite” buzz around the lineup. In turn, not only did the day satisfy a diversity of musical needs, but each show was almost guaranteed not to disappoint.

Came to dance? Houston’s-own Wild Moccasins had you covered there. The trio’s new wave-influenced brand of indie-pop electrified the place, thanks to singer Zaharia Gutierrez’ complete control over the stage, moving with the ease and charm of a true 80s pop star.

Needed to fill your psychedelic void? Austin bands Glaze and Holy Wave provided plenty of reverb-drenched melodies for that, as the latter played through much of their fantastic 2020 release Interloper which focuses on heavy synth and drone sounds—all things perfectly fit for a cold overcast night in Houston.

Wanted something a little jammier or instrumental? Mamalarky checked that box. Playing through the entirety of their self-titled debut on Fire Talk Records, the band put on an exhibition on musicianship, throwing the full kitchen sink at the audience—from finger-picked guitars, to off-kilter time signatures, to keyboardist Michael Hunter’s remarkable synth leads. When the album was released just last month, one listen through delightfully shot me back to that sundown set (especially album standouts “Fury” & “You Make Me Smile”). Given the critical success that has since built up around those songs that we first heard at Castle Christmas, the performance feels even more precious in hindsight.

Playing through the entirety of their self-titled debut, Atlanta's Mamalarky satisfied any and all needs for instrumental brilliance.
Photo by Connor Fields
Whether it was the groundwork set by the day’s earlier sets from bands like Wild Moccasins and Holy Wave, or the simple thrill of being surrounded by familiar faces in the small backyard patio of the city’s favorite little East End spot, the energy that flowed through to the night’s headlining shows was indelible to say the least.

Divino Niño’s Colombian-infused indie-rock opened up the festival’s dance floor properties, as absolute jams like “Coca Cola” and “Maria” were accompanied by the buoyant stage presence of frontman Camilo Medina (along with plenty of moves and voices from the crowd).

Those physical and vocal tendencies kept up to the night’s headliner, Beach Fossils. The band’s first trip to Satellite in 2019 marked a crowning achievement for the venue, as it was not only proof that they could properly handle hosting a larger touring band known for a raucous crowd, but more so proof that they were the city’s ideal candidate to do so. Beach Fossils’ set at Castle Christmas only served as confirmation. The ridiculously-powerful sound system (appropriately so), combined with the overall backyard-like vibe of the space perfectly lent itself to the jangly post-punk sounds of the Brooklyn rockers, and the crowd let you know it. Whether crowd surfing, screaming their way along to the choruses of “This Year” or “Sugar”, or even going so far as to push down the front-stage barricade, the 700 or so fans made sure to get out whatever pent up energy was left by that point.

Yet, as can be said of nearly every Satellite show over the last few years, it was the community aspect of the day that made it truly memorable. Walking around the patio between sets (or even inside in the bar where different DJ sets were occurring), there was the feeling that all in attendance were friends with one another, with groups of faces (both familiar and new) rotating about the patio’s picnic tables where socializing and dancing could be found. The line between artists and audience was equally blurred, with band members being found amidst the crowd watching other performances, or even standing around chatting up fans and staff. Given the homogenization of both music venues and festivals, this informality that Satellite was able to naturally achieve with Castle Christmas was as refreshing as it was enjoyable being a part of.

Of course the act of hearing live music itself has been plenty missed over these past nine months, but it’s these less tangible ancillary aspects that I find myself yearning for the most—the commingling of community and art that events like Castle Christmas perfectly displayed before the pandemic halted this form of entertainment and expression. These things once made many of us whole, especially in a city as artistically active and diverse as ours—and they will once again. When that’ll be remains to be seen, but until then I’ll be fantasizing of another Castle Christmas. 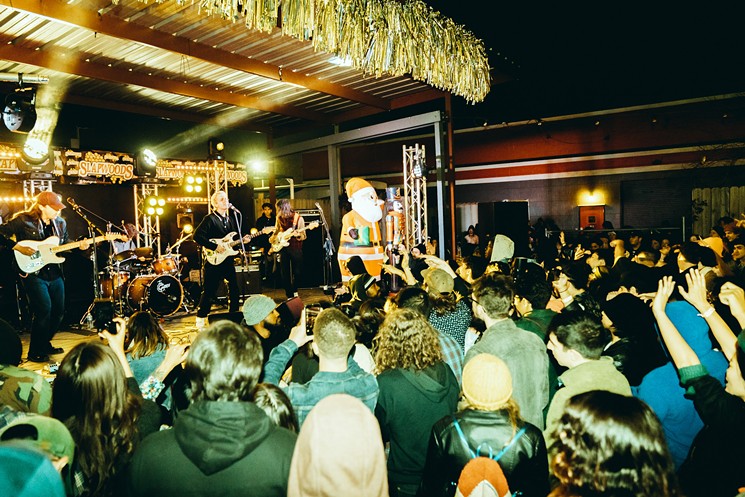 With a heavy dose of audience-interaction, Beach Fossils' enthusiastic set at Castle Christmas perfectly encapsulates what we've been missing out on these last nine months, and what we can only hope will return ASAP.
Photo by Connor Fields
KEEP THE HOUSTON PRESS FREE... Since we started the Houston Press, it has been defined as the free, independent voice of Houston, and we'd like to keep it that way. With local media under siege, it's more important than ever for us to rally support behind funding our local journalism. You can help by participating in our "I Support" program, allowing us to keep offering readers access to our incisive coverage of local news, food and culture with no paywalls.
Make a one-time donation today for as little as $1.