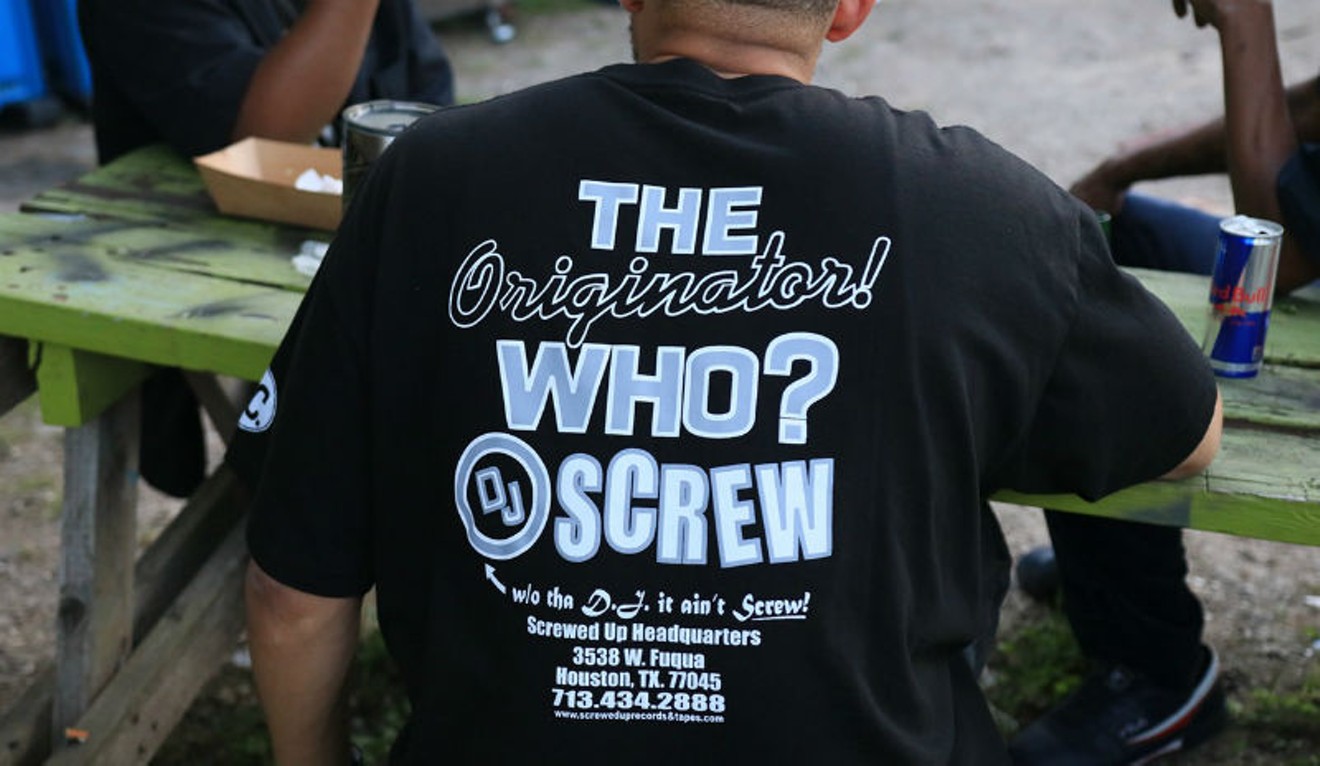 Honoring all things DJ Screw Photo by Doogie Roux
The first annual S.U.C. 420 festival was 12 hours of all things DJ Screw at Super Happy Fun Land Saturday, honoring the life and music of Robert Earl Davis Jr., the Houston innovator who introduced the world to his slowed down sound.

With smoke of all kinds wafting through the air, crowds at the marathon event watched performers of all types – DJs, musicians and break dancers – on a day they remembered the man who donned the name DJ Screw.

Some on stage, like original member of the S.U.C. and Botany Boyz, Will Lean, personally knew Davis. Others got to know the Houston legend through his hundreds of mixtapes.

Cedric Hill bopped in front of the audience as the DJ chopped through the instrumental of Whodini’s “Friends.”
Hill, better known as ESG (one of the original members of the Screwed Up Click) is always quick to spit a freestyle and he did not disappoint. Moving around the venue he pointed at other people on the stage while rhyming whatever came into his head as they nodded in approval. Behind him, pictures of the late S.U.C. founder, Robert Earl David, Jr. digging through record crates flashed on the wall.

DJ Screw’s sound, captured on screwtapes and initially sold out of Davis’ house, garnered him enough recognition to open Screwed Up Records and Tapes, a music store still in operation to this day.

For Saturday’s event, Screwed Up Records and Tapes joined forces with Bounce & Turn, the purveyors of a monthly Houston Hip Hop showcase, and brought out artists, b-boys, food trucks, breweries, and more to the Polk street venue.

The event, started a little after 2 p.m. and ran well into the early morning. As it began, a graffiti artist put the finishing touches on a building sized mural of DJ Screw. The off-white letters spelling out “MAYNE!” dripped into a sea of purple with Screw’s face prominently displayed. The DJ’s face across the wall appeared to look over the crowd as they spilled into the festival.

Guests could snap selfies in front of an art installation recreating the store front of Screwed Up Records with Davis handing out a screwtape. Vendors offered their various takes on DJ Screw’s legacy with one taco truck sprinkling “Lean Sauce”, a purple hot sauce poured straight out of the replica of a codeine bottle, onto customers’ orders.

While the main performing acts didn’t go on until late in the evening, there were still opportunities for musical entertainment earlier. DJ Donnie Houston hosted a beat battle with the winner getting the chance to work with Screwed Up Record and Tapes. The shop also offered mixtape work to the winner of the DJ Battle. B Boys launched themselves in the air in competition as B Girl City judged a break-dancing battle.

While there were some lulls that would be expected with any festival, fans of DJ Screw and his legacy should look forward to the festival continuing to get bigger and better in the future.
KEEP THE HOUSTON PRESS FREE... Since we started the Houston Press, it has been defined as the free, independent voice of Houston, and we'd like to keep it that way. With local media under siege, it's more important than ever for us to rally support behind funding our local journalism. You can help by participating in our "I Support" program, allowing us to keep offering readers access to our incisive coverage of local news, food and culture with no paywalls.
Make a one-time donation today for as little as $1.