The recent passing of Gregg Allman got me to thinking a lot of about the current state of classic-rock groups on tour this summer – and there’s a lot of them.

And then there are the bands missing their classic front men. Are Styx, Journey, Foreigner, Boston, Grand Funk Railroad, or Yes somewhat shells without Dennis DeYoung, Steve Perry, Lou Gramm, Brad Delp, Mark Farner, or Jon Anderson? Even as those bands create new music and fill concert seats? As members continue to fall away, at what point does a band become its own tribute act?

I'll admit it. I used to be a hard-ass about it in my head. Things weren’t legit if one of the “key members” was gone (and, for better or worse, that’s usually the lead singer or guitarist – sorry, drummers).

But the fact is that in 2017, by multiple means of attrition be it death, health, quitting, firing, or leaving to pursue other opportunities, things have changed for acts with 40 or 50 years in the rearview mirror. And it took this Father’s Day show to make this Classic Rock Dad flip the script in his head and learn to let go and just enjoy.

Sure, only three of the seven Doobies and three of the nine Chicagoans onstage actually played on the recorded versions of the songs this night – the ones you know and love. But you know what? Let’s face it – only music nerds really care so much about this stuff. How many people in the audience were really hoping to see Jeff “Skunk” Baxter, Tiran Porter, Danny Seraphine, or Bill Champlin? Michael McDonald and Peter Cetera are long gone (though the former makes occasional guest appearances with the Brothers). Today, classic rock shows today are shifting toward the overall experience.

Original Doobie Brothers singers/guitarists Patrick Simmons and Tom Johnston, with drummer Ed Toth.
Video capture by Bob Ruggiero
For a generous 3 ½ hours, the 2017 versions of these groups played all-killer-no-filler sets that sounded great and were more than faithful to the music that brought a near-capacity crowd out at The Woodlands.

I’ve seen both groups many, many times before over the various years with various , and my reactions have ranged from “great” to “good” to “meh” to I-walked-out-early. But this night showcased two of the strongest sets I’ve ever seen from either band.

The Doobie Brothers came roaring out first, punching out with their Tom Johnston-era hits and a few sweet deep cuts. They were often accentuated with multiple fist pumps from the singer himself, who seemed genuinely jazzed. Rocks Off spoke to him just recently. “Rockin’ Down the Highway,” “The Doctor” and “Without You” stood out. As did the psychedelic folk of choice nugget “Clear As the Driven Snow” (off 1973’s The Captain and Me).

In fact, it was  of the non-classic lineup members who really made an impact with their live talents, be it sax player Marc Russo on “Eyes of Silver,” ex-Little Feat keyboardist Bill Payne, and bassist/singer John Cowan, who commanded strong pipes on “Take Me In Your Arms (Rock Me)” and on the one tune in the set list originally handled by Michael McDonald, “Takin’ It To the Streets.”

After a very brief intermission (kudos to the shockingly efficient road crews and stage setup), Chicago burst onto the stage as if they had something to prove, even though the band (and rock-band-with-horns brand) was founded a full half-century ago.

Early, tough, experimental rockers, ‘70s ballads, and ‘80s more polished tunes (come on, admit you sing along) all coexisted beautifully. And kudos to the group for playing trombonist James Pankow’s - himself a fireball of energy - entire “Ballet for a Girl from Buchannon” suite from 1970's Chicago II (though technically just called Chicago). That series also gave trumpet player Lee Loughnane – who rarely sings – a touching vocal stab at singing “Colour My World”). Singer/keyboardist Robert Lamm – the third and final original member - also added some oomph to 's-sung-it-a-million-times “Beginnings." Rocks Off spoke with him recently.

Chicago's shiny new weapon, Jeff Coffey, with original member Robert Lamm
Video capture by Bob Ruggiero
But the star of the night hands down was the new guy, Jeff Coffey. The singer/bassist just recently took over for Jason Scheff (31-year tenure), who in turn took over for Peter Cetera (18 years). And he nailed it.

Sounding reminiscent of Cetera without being an imitation, he sang clearly, powerfully and with real conviction on songs like “(I’ve Been) Searchin’ For So Long,” “If You Leave Me Now,” “25 or 6 to 4” and – yes – even “You’re the Inspiration” and “Hard to Say I’m Sorry.”

For the rest of the group, the “new/newish guys” all got a chance to shine: Drummer Tris Imboden and frenetic percussionist Walfredo Reyes Jr. put on an entertaining drum solo that didn’t make you immediately want to run the bathroom. Guitarist Keith Howland shredded on many of Terry Kath’s original parts. Ray Herrmann played punchy sax and floating flute. And Lou Pardini proved himself a solid sender on keyboards and vocals.

Chicago also had a very effective “light show” on screens behind them and on the front of the stage that, while most of it was a variation of flames, colors and animation based around the band’s famous logo, actually added quite a bit to the visual experience. It was most effective during 1979's "Street Player," which, remixed, has recently become an unlikely EDM dance club hit. Though it would have been nice to see more historical photos of the group itself and former members in the video montages, especially given the band’s anniversary year.

So, in the end, so what if the 2017 Chicago isn’t the one you remember (even if you weren’t there) from 1967, 1987 or even 2007. So what if the Doobie Brothers didn’t have Michael McDonald also in tow. The fact is, as classic rockers age and newer generations come to the music, it’s the music that survives. But tonight, it also thrived.

Personal Bias: An admirer of hits and deep cuts for both groups, staples of my classic rock upbringing. Chicago Transit Authority is on my Top Ten Album list, and I treasure my late father’s much-played vinyl copy. Fitting that my son’s first concert featured two of his Poppy's favorite groups, making the Father’s Day show even more special.

The Crowd: Buoyant dressed cool for the heat.

Overheard In the Crowd (more than once): “The blond singer for Chicago looks like Owen Wilson.”

Random Notebook Dump: “Jeff Coffey does look like Owen Wilson. But without the messed-up nose.”

Been There, Done That, Bought the T-shirt: Vincent Ruggiero at his first big rock concert.
Photo by Proud Dad!
BONUS REVIEW!
By Vincent Ruggiero, a.k.a. "Classic Rock Kid." This was the 13-year-old's first major concert.
Going the concert, I didn’t know what to expect. Would I end up liking the Doobie Brothers more after receiving a $40 Chicago T-shirt? Would my dad embarrass me? Am I happy with my overall experience?

The Doobie Brothers
Starting off at 7:15 with “Jesus Is Just Alright” and ending at 8:30 with “Listen to the Music,” the Doobies’ performance was very good. “Black Water” had to be my favorite, partly because of the line “Texas moon, won’t you keep shinin’ on me?” Bill Payne’s keyboard solo wasn’t too bad, either.

Chicago
Starting at 8:50 with “Introduction” and ending at what seemed to be around 3:35 a.m. — or “25 or 6 to 4” — Chicago’s performance was long but strong. My favorite song was “Does Anybody Really Know What Time It Is?” because the vocals fit the song. As for Jeff Coffey, his vocals were great, but not the vocals for “Saturday in the Park” or “25 or 6 to 4.”

So did I end up liking the Doobie Brothers more? Their performance was better, but they’re still not better as a band. Did my dad embarrass me? Let’s just say his dance moves to “Beginnings” weren’t the best. Was I happy with my overall experience? Yes, and I can’t wait to come back! 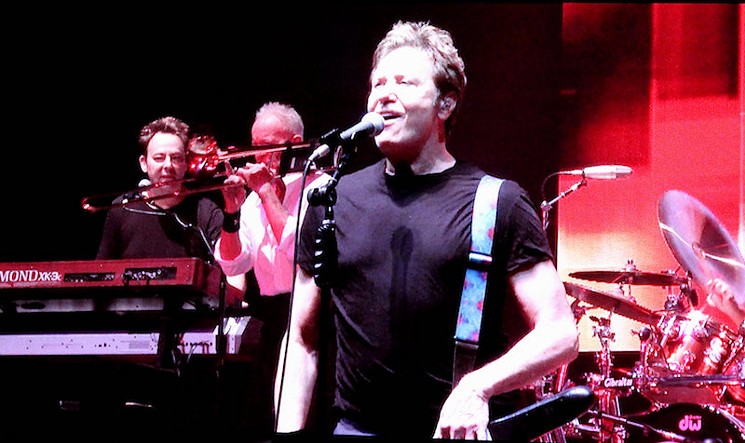 L-R: Lou Pardini, James Pankow and Robert Lamm
Video capture by Bob Ruggiero
Chicago
Introduction
Questions 67 & 68
Dialogue (Part I & II)
Alive Again
Wake Up
Call Me
(I’ve Been) Searchin’ for So Long/Mongonucleosis
If You Leave Me Now
Ballet for a Girl from Buchannon (Suite)
* Make Me Smile
* So Much To Say, So Much To Give
* Anxiety’s Moment
* Colour My World
* To Be Free
* Now More Than Ever
Free Form Guitar or South California Purples (snippet)
Old Days
Does Anybody Really Know What Time It Is?
Hard Habit to Break
You’re the Inspiration
Beginnings
I’m a Man
* Drum/Percussion
Street Player
Just You ‘N Me
Hard to Say I’m Sorry/Get Away
Saturday in the Park
Feelin’ Stronger Every Day