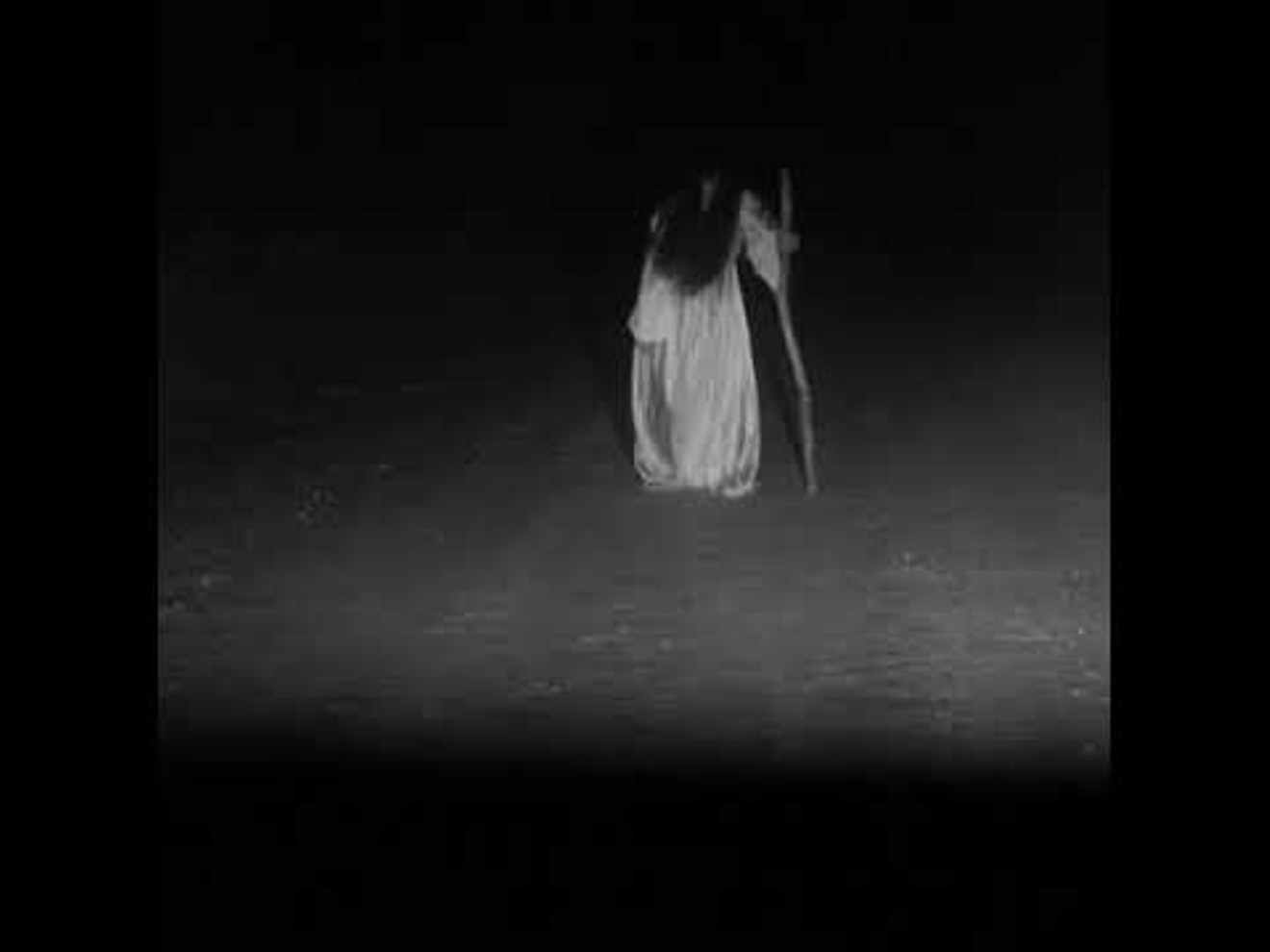 Darwin's Finches encountered this while filming their new music video on Bragg Road in Saratoga, Texas. Photo/Screenshot by Michael Stratigakis


I met up recently with Justin Clay, founder, lead guitarist, lead vocalist and primary songwriter for Darwin’s Finches, a band he started back in 2006 in Galveston; Cody Honey is now on drums with Morgan Moody on bass after several other guys have come and gone on those respective instruments throughout the years.

Clay was excited to talk about the new Darwin’s Finches music video for the song “Hwy 787” and explained the origins of the song and the adventures he and the band and crew got into while making the video.

“There is a really deep kind of story with me and Myra Morrison, who is the lady of my life, my son’s mom who has been there from the beginning, Pre-Hurricane Ike days,” explains Clay. “One of the first dates I ever took her on was to see this ghost light that appears on this 8 mile road (Bragg Road aka the Ghost Road) out in Saratoga in East Texas in The Big Thicket.”

Clay first heard about the haunted road from the father of one of his high school friends who talked of partying out on the road and witnessing a light that appears that he claimed was a real ghost.

“Me and my brother as soon as I was able to drive, we went out there and it’s like the middle of nowhere, there’s just like no civilization around and dilapidated houses and lots for sale and stuff and the big thicket, pine forests for as far as the eye can see,” says Clay. “Back then it was no GPS days so we were road mapping this you know. On 787 there’s this little scenic turn off drive that’s like a straight shot for 8 solid miles that looks like a little doorway in the woods.”
Clay says that after reaching the one lane dirt road at dusk stretching out into the horizon it then turned pitch black at night when they turned off the car’s headlights; Clay and his brother took turns scaring each other about the ghost while encountering a few other cars whose occupants stopped to inquire whether they had seen the spirit.

“Hours later we saw a few more car headlights come on and then I remember we were leaving the ghost road and there’s like this faint little blue light and then it just gets real bright and it just blips out,” says Clay. “And it was weird, honestly we drove forward and we were like there’s no car here so the story I took away from it was we saw stuff I couldn’t really explain. That was probably like 2003.”

The Ghost Road started off as a railroad track built in 1902 connecting Bragg Station to Saratoga; the Saratoga train made daily trips to Beaumont carrying passengers, oil, logs and cattle before the rails were pulled up in 1934 after the oil boom in the area crashed. Hardin County purchased the right-of-way turning it into a county road shortly thereafter.

There are several different legends as to what the “Light of Saratoga” is; the most popular version being that a railroad worker was decapitated along the line in an accident and his ghost is out searching for his head with a lantern. Another story is the light is a groom out looking for the man who murdered his bride while the couple was honeymooning at the old Bragg Hotel which was located at the end of the road; you can find several sites and pages on the Internet offering different supernatural explanations to what the light is.

Clay says he ran into a guy named “Snapper” on the ghost road who told Clay that he heard the railroad had hired Chinese immigrants to build the rail lines and as soon as they were done instead of paying them they were mass executed and buried in the woods, their ghosts supposedly haunting the road. The story seems to be just another legend with no basis in fact that we could find.

Skeptics say the Saratoga Light is simply the headlights of automobiles and trucks passing along a stretch of US 787 that align perfectly with the Ghost Road before entering a bend and disappearing from view; critics of this theory point out that the light has been seen for 80 years in earlier times when there were few cars traveling down or near the road and old Model T’s headlights wouldn’t have shined brightly enough anyway.

Still other skeptics claim the light comes from Swamp Gas or other natural phenomenon; regardless of what it actually is it attracts a lot of curiosity seekers out for a good time and adventure.

“I took Myra out there like one of the first times I met her but it was hilarious because we didn’t see anything because the moon was very bright that night so it was a super awkward thing to take your date on,” Clay says with a laugh. “Let’s go drive for like 4 hours out in the middle of nowhere. We just saw other cars passing and stuff but honestly sometimes it could be pretty creepy out there. When me and Myra were leaving this big truck would roll past us and then he u-turned around and followed us for a really long time and eventually I was like okay let’s go! So I peeled out down the Ghost Road you know to get away.” Justin Clay of Darwin's Finches shows me that the Native Texas plant Turk's Cap is edible.
Photo by David Rozycki
Clay says the Darwin’s Finches song “Hwy 787” was inspired by the first trip out to the Ghost Road with Myra.

“I was kind of like an insomniac back then so I was always a shaky, tired, pale-skinned person with bulging veins so on the way out there we got pulled over by this cop and he was looking at me,” Clay says. “He asked me what was wrong with me and I just said I’m tired so Myra took over driving so it was just a weird first date and the rest is history, now we have a kid.”

On the road between Galveston and The Ghost Road another site that made an impression on Clay was a place called Rodney’s Barbecue.

“I remember that in the state of mind that we were both in just awkward silence driving down the road on the horizon comes this sign for Rodney’s Barbecue and we’re both like oh my god because it had this cartoon of a dancing cowboy on it and that stuck with me” says Clay. “I used that little Rodney the Dancing Cowboy; he became like this psychotic little cartoon character, like this little demon you know so I used that when I wrote up the story for the music video.”

Clay decided he wanted to make a music video shot out on the actual Ghost Road where the mysterious light appears for “Hwy 787” and he enlisted the help of his cousin Michael Stratigakis to direct it, who lives out in California and has experience directing commercials, short films, and branded content.

“The story was just going to be Darwin’s Finches drives into the Ghost Road and gets scared by all these random things that are out there and we had really random stuff, like goofy stuff because that’s kind of a Darwin's Finches element is I think about things cartoonishly you know,” says Clay. “So there’s like an astronaut and a crooner and all this weird stuff appearing and we filmed it all in the day time, day for night.”

Darwin’s Finches and the video crew ran into several curious locals who were wondering what they were doing out on the Ghost Road all day especially with many wearing weird makeup and outfits; Matty Sullivan, the band’s old bass player, was dressed up as Rodney The Dancing Cowboy and Steve Rulz, a friend of the band was dressed up in an impressive bison costume. So the video is more comedic and goofy than scary, yet still cool all the way; Clay says the plot revolves around Darwin’s Finches getting lost on the Ghost Road and getting caught in between a conflict between the bison and a poacher.

The most bizarre thing that occurred on the set of the video was when an uninvited guest showed up at night.
“Right as it was getting dark everybody else in our little crew had went to the front of the Ghost Road and I was sitting in the driver’s seat of my van and my cousin Michael was sitting in the passenger’s seat with two other guys in the back seat heading towards the entrance and ahead of us we see a person, and we were like ‘oh is that one of our people’ and it was like this lady dressed up like “The Ring” the girl from the movie,” Clay says. “She had like a white gown on and we were like this is some person trying to freak us out and it was working!”

“My cousin picked up his camera and he turned it on and was like ‘get closer, get closer’ and I rolled down the window and I was flashing my brights at her and then she started getting like real crazy and threw her stick off into the woods,” Clay continues. “She started freaking out and I was flipping my lights at her and then I turned them off for 1 second and then it was like she ran off into the woods and we were like that was crazy!”

“It actually gave us all like an adrenaline rush and we zoomed to the front of the road and Michael was like this is gold!” Clay says. “We don’t even know who that is, going to just like, credit them as this was the ghost, you know?”

Clay stopped the van and had a little flashlight and he shined it around into the woods but there was no sign of that person; or was it a real ghost? Whatever it was you can see the footage in the music video and all the raw footage above or maybe take a trip out to the Ghost Road and you might run into her yourself.

Darwin’s Finches latest album, Good Morning Creatures II, includes the song “Hwy 787” and is available now from Artificial Head Records & Tapes.
KEEP THE HOUSTON PRESS FREE... Since we started the Houston Press, it has been defined as the free, independent voice of Houston, and we'd like to keep it that way. With local media under siege, it's more important than ever for us to rally support behind funding our local journalism. You can help by participating in our "I Support" program, allowing us to keep offering readers access to our incisive coverage of local news, food and culture with no paywalls.
Make a one-time donation today for as little as $1.
David Rozycki
Contact: David Rozycki