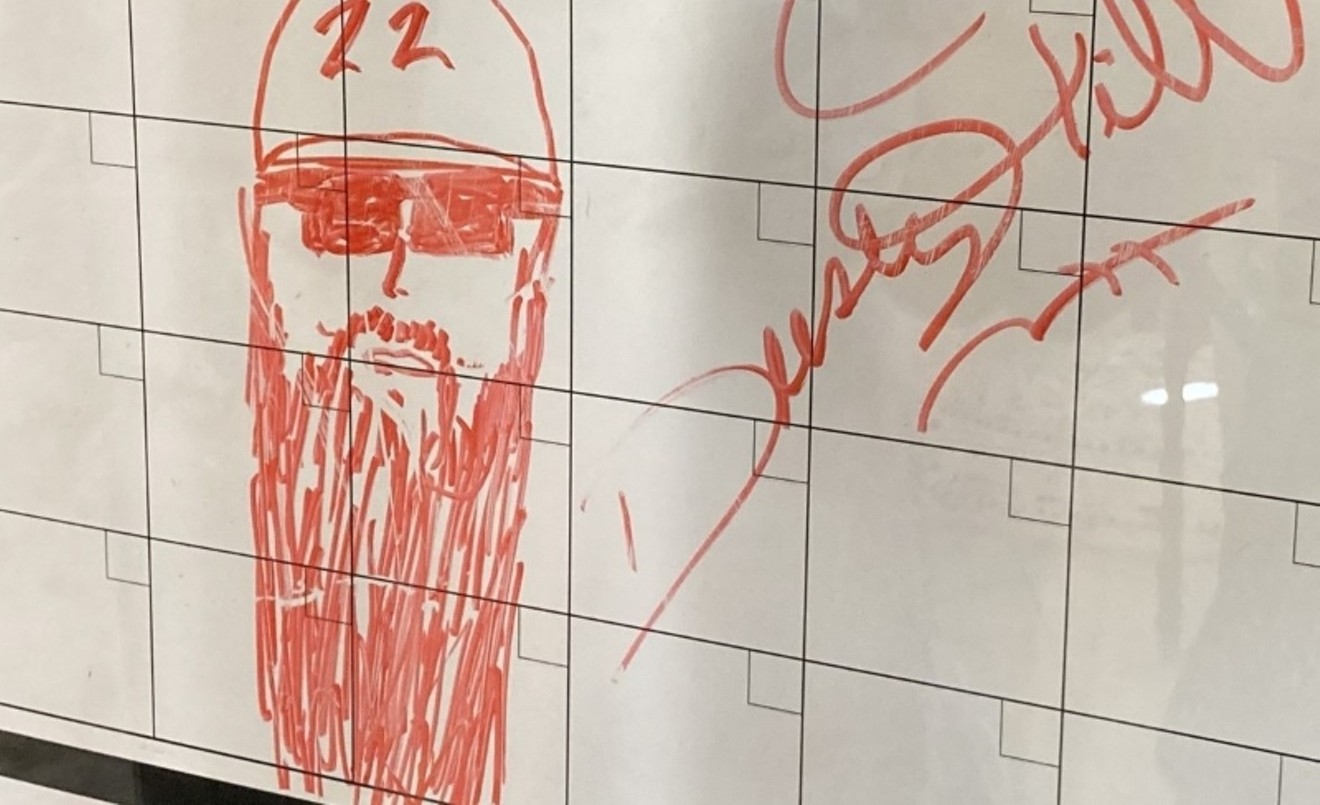 This self-portrait, drawn by the late ZZ Top bassist on a whiteboard in his garage, is up for grabs at the Dusty Hill Estate Sale. Photo by Tom Richards
Editor's Note, 6-28-22: As reported in Culture Map today, the widow of ZZ Top bassist Dusty Hill has taken legal action against the organizers of the estate sale, saying she knew nothing about it and did not authorize it. For more on this developing story, see the Houston Press story and Culture Map's.

Original Story:
Arriving at the Dusty Hill Estate Sale, a shopper might expect to hear “La Grange” pumping through the sound system, see a tub full of iced longnecks ready for the grabbing, and smell the aroma of BBQ just coming off the grill. Right?

When word began to circulate that The Guilded Monkey Market had acquired a trove of items owned by the late ZZ Top bassist, many fans wondered if this might be the chance to snag some stage clothing worn by the Dust during a concert performance. Possibly pick up one of those ZZ Top keychains that always showed up in the MTV videos.  Or, if the fates were smiling, maybe go home with an instrument that had been played on a ZZ Top album. 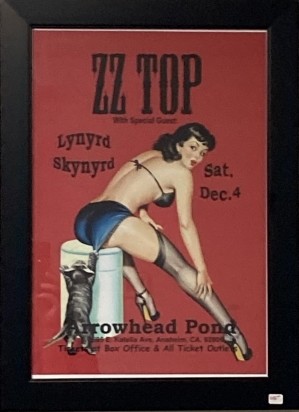 This poster advertising a 1999 concert is representative of the ZZ Top memorabilia available at the Dusty Hill Estate Sale.
Photo by Tom Richards
Or maybe not. Strolling through the Guilded Monkey warehouse during a pre-sale preview, it quickly became apparent that this was, in fact, a classy occasion. Waiters with trays of wine moved through an impressive selection of furniture, rugs, and objects d’art. No neon beer signs. No pinball machines. No pool tables, nor anything else that might be found in a typical man cave.

Walking amid items artfully arranged to suggest ways in which they might occupy an affluent home, Guilded Monkey principal Dominique Kendall explained that the estate sale came about when a house formerly belonging to Hill changed hands. Hill had sold the property – located in the exclusive Woodlands enclave of Carlton Woods - around 2010 to a family who bought all of the furnishings along with the house. When those owners recently sold the house, the new occupants did not want to keep the furniture, hence the current sale.

The vibe was that of an upscale furniture store, albeit one with a serious commitment to animal prints. The building was full of furnishings by Baker and Henredon, with tasteful accent pieces scattered throughout. The only thing missing was pesky salesmen following the customers around.

So are there any “manly man” items available at the sale? Yes, but you have to walk to a back room to find them. There, a buyer will see gleaming red and black Craftsman tool cabinets – a bunch of them - with each drawer bearing a label indicating its contents. Hill’s garage must have been extremely neat. 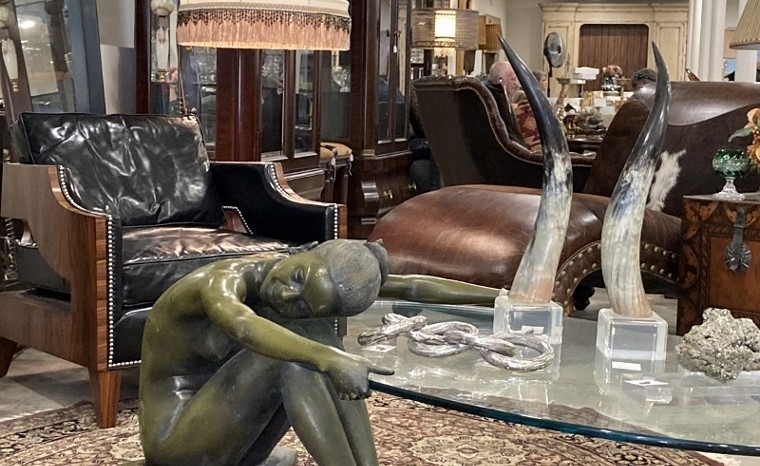 "Hello, welcome to Dusty Hill's Fine Furnishings. I'm Bob. What are you folks shopping for today?"
Photo by Tom Richards
Kendall and Guilded Monkey partner Thom Anderson believe that another item from the Hill garage is the sale’s pièce de résistance: a whiteboard that hung above the tool chests, bearing a self-caricature drawn by Hill as a welcoming gesture to the new residents when they moved into the house. Other highlights include Hill’s desk, paintings from his art collection, and decorative pieces with a western flair. 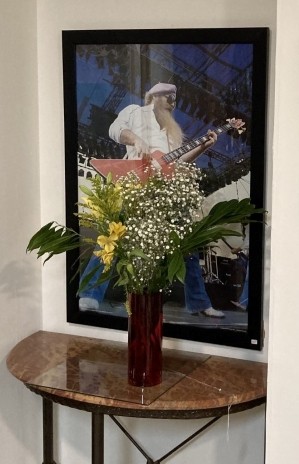 For rockers, the best part of the sale is a collection of framed memorabilia from ZZ Top’s career, which spanned over 50 years. A promotional photo from the ‘70s shows the members of ZZ Top in all of their bedazzled, Nudie-suited glory. Posters promoting concerts and albums from over the years hang on another wall.  And a large photo of Hill onstage in the early ‘80s reminds shoppers of what a rock star he truly was.

Forget the longhorn steers, hot rods, and furry guitars. Hill – along with bandmates Billy Gibbons and Frank Beard – was a badass musician, holding down the bottom end with his bass while lending his distinctive tenor voice to classics like “Beer Drinkers and Hell Raisers,” “Tush,” and “Heard It on the X.” Unfortunately, the photo was partially obscured by a vase full of fresh-cut flowers. I’m not sure if Dusty would have approved.

So what did I buy? A 1999 ZZ Top concert poster which employs a vintage pin-up motif.  The piece depicts a Bettie Page type contending with a rambunctious kitten who is trying to relieve the young lady of what used to be termed her “scanties.” How could I leave without it? That poster was the most rock and roll thing in the joint.

The Dusty Hill Estate Sale will be held Friday, June 10, through Sunday, June 12, 10 a.m. - 5 p.m. at the Guilded Monkey Market warehouse, 7023 Rampart. For more information, call 713-360-3147.
KEEP THE HOUSTON PRESS FREE... Since we started the Houston Press, it has been defined as the free, independent voice of Houston, and we'd like to keep it that way. With local media under siege, it's more important than ever for us to rally support behind funding our local journalism. You can help by participating in our "I Support" program, allowing us to keep offering readers access to our incisive coverage of local news, food and culture with no paywalls.
Make a one-time donation today for as little as $1.