EarthGang Bring Their High Energy Show To The House of Blues 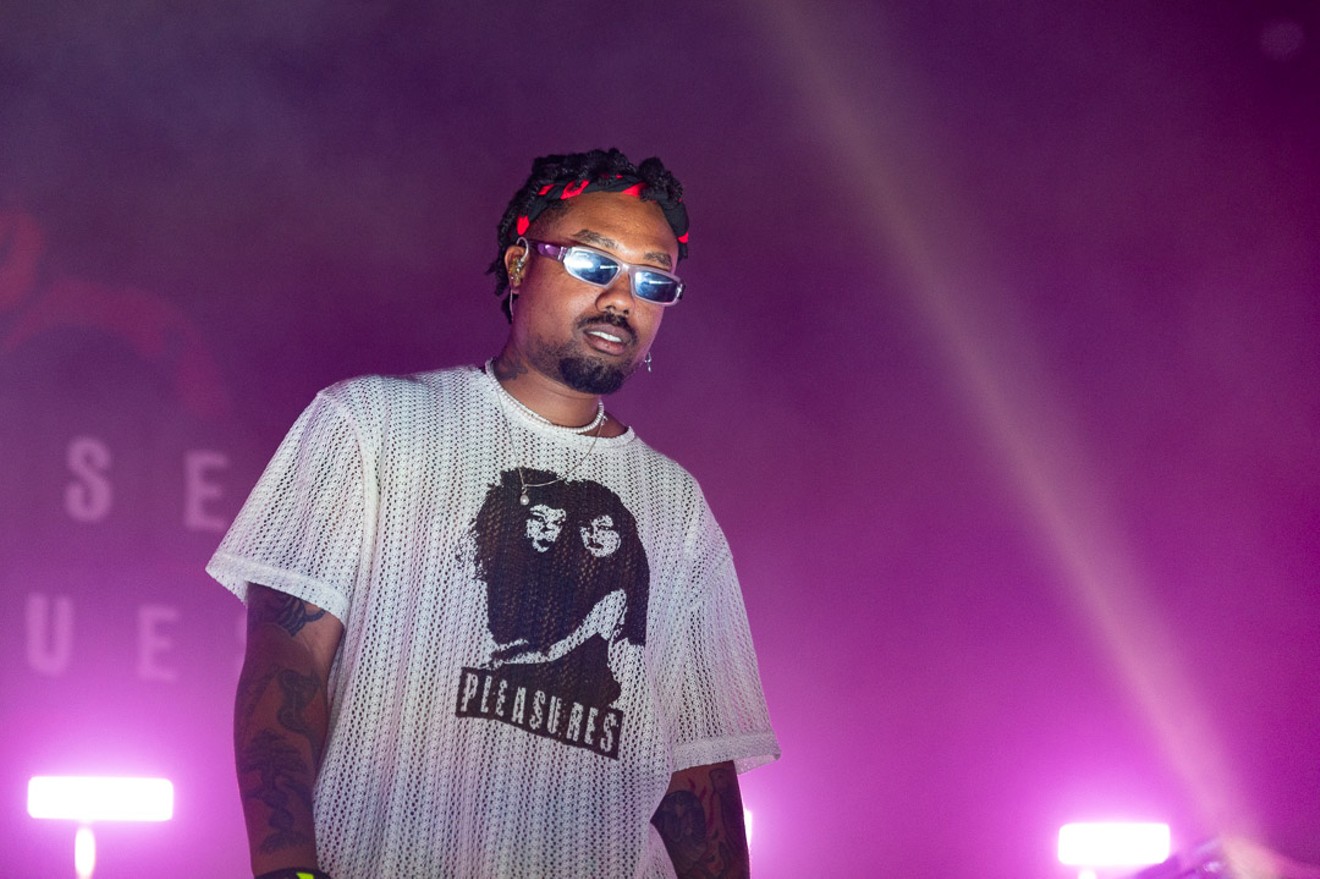 WowGr8 looks over the crowd at the House of Blues Photo by Jennifer Lake
“Everybody just take a deep breath,” exclaimed Johnny Venus as WowGr8 walked to the back of stage to grab a bottle of water. Audience members who had just been jumping frantically with the last song began to calm down and breathe along with the instructions. “Everybody take a deep breath in and then let it out.”

Silence fell upon the crowd at House of Blues as the two MC’s, better known as Earthgang, stood center stage. Dressed simply, with WowGr8 wearing a white T-shirt and floral print shorts and Venus in white embroidered pants and two layer button up shirts, the two stood still with their hands held up in front of the audience.

The duo, composed of Olu Fann and Eian Parker, got together in high school back in Atlanta due to their diverse taste in music. Since then, under their alter egos Johnny Venus and WowGr8, the two have built a strong following in the music world attracting the likes of Ab-Soul, Mac Miller, J.U.S.T.I.C.E League, Childish Major, Bas, and J. Cole. The two impressed Cole so much that they were eventually signed to his Dreamville Records imprint. The signing led to the Earthgang appearing on the high energy single “Down Bad” alongside J. Cole, Bas, and Young Nudy on the label’s compilation album Revenge of the Dreamers.

And as the opening riff from “Down Bad” echoed across the room at House of Blues the crowd, who moments earlier where being led in calming breathing techniques, erupted into pandemonium. Now led by an animated Earthgang, audience members jumped up and down in unison with the group while singing along with the hook.

Earthgang touched down at the House of Blues Friday night and barely gave those who were there a moment to catch their breath as they ran through their catalog of music. The duo delved into some of their earlier works but spent most of the show delivering hits from their last two albums, Mirrorland and Ghetto Gods. Fans sang along as the duo ran through a song list that included “Lie to Me,” “Top Down,” “Sacrifices,” “Proud of You” and “American Horror Story.” For fans like Maya Johnson the show was more than satisfying.

“Their energy is wild,” she said, laughing. “I love music so seeing an artist in their own element is so great. It’s just refreshing to see them perform.”

For others, Earthgang might not have been the reason they came to the show but things changed when the group hit the stage.

“Mike Dimes brought me out. He was opening for Earthgang and he’s from San Antonio like me so I had to come out and support,” said Kyle Garza. “And Mike put on a great show. Now this is my first time seeing Earthgang live in concert, and they were really good. It was a great show with a great crowd.”
KEEP THE HOUSTON PRESS FREE... Since we started the Houston Press, it has been defined as the free, independent voice of Houston, and we'd like to keep it that way. With local media under siege, it's more important than ever for us to rally support behind funding our local journalism. You can help by participating in our "I Support" program, allowing us to keep offering readers access to our incisive coverage of local news, food and culture with no paywalls.
Make a one-time donation today for as little as $1.