A parade of lonely people happens in "Sea Change." Screenshot

As one of the hardest and most bizarre years in a generation limps slowly to a close under a dreary, cold rain, Athens, Georgia band Easter Island finds its members scattered to the winds with no stage to bring their music to an audience.

Keyboardist Asher Payne landed himself in Houston during the quarantine. When the band decided they would try to re-unite through a series of remotely shot music videos expressing where each member ended up during coronavirus, he chose to showcase us. We’re happy to premiere, “Sea Change,” starring Asher and the city he’s called home during the Plague Year.

“This video is a representation of what Houston has been for Asher, and given that he moved to a closed Houston at the very beginning of the pandemic, its primary focus is the people of Houston, and not the sprawling concrete city itself,” said the band in a statement. “It’s a video about isolation and humanity; about a lone companion in Delphi, his dog, and a shared need for connection between humans.” 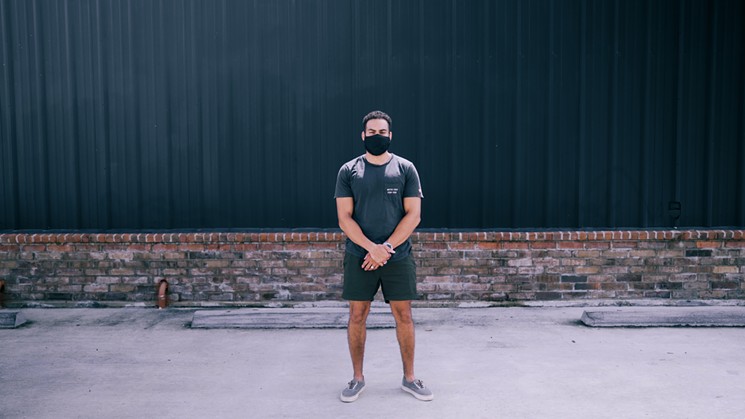 A parade of lonely people happens in "Sea Change."
Screenshot

Directed by Asher and shot by his brother, guitarist Ethan Payne, the dream-pop ballad perfectly captures this broken piece of history. Set against an empty Houston, it’s a character study of random people, most of them masked and generally all of them with haunted eyes. Neighborhoods are deserted, spaces are blank and lonely, and the feeling of an untethered existence permeates every second. The chorus contains the line “got a ticket to fall apart,” and that sentiment is apparent for most of the video. Everyone in it seems like they are deciding whether to use that ticket or not.

It’s not just a parade of sadness, though. Life slowly creeps into the vision of H-Town the Paynes craft. Masks are taken off and smile are apparent. There are awkward touches as people remember what it’s like hug, to dap, or even to just sit at a table together like we used to. Will those recovered days be coming soon? Only The Doctor knows, but “Sea Change” is a welcome harbinger of the hard days of the recovery that may come. For that reason alone, it’s worth spending four minutes in its presence.

The full album, Take All the Time You Think You Need, is out on December 11.
KEEP THE HOUSTON PRESS FREE... Since we started the Houston Press, it has been defined as the free, independent voice of Houston, and we'd like to keep it that way. With local media under siege, it's more important than ever for us to rally support behind funding our local journalism. You can help by participating in our "I Support" program, allowing us to keep offering readers access to our incisive coverage of local news, food and culture with no paywalls.
Make a one-time donation today for as little as $1.