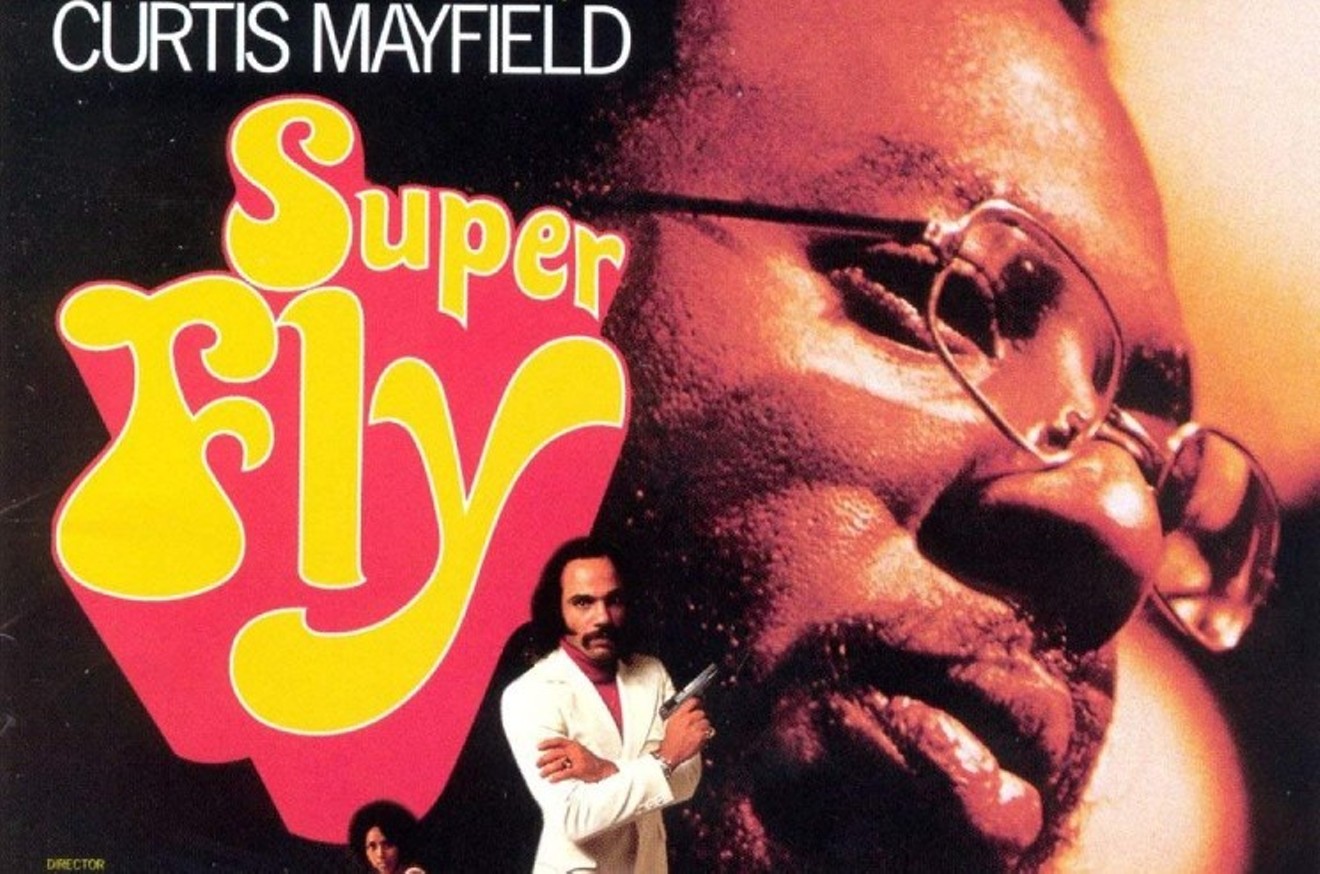 Curtis Mayfield's classic album Super Fly Album cover art
It’s Easter, so once again it’s time to ponder painted eggs, popcorn bunny rabbits and the 1970s Blaxploitation classic Super Fly. If you and your Peeps don’t celebrate the season by watching one of the 20th century’s most commercially successful Black American works of cinema – and, more pointedly, by blasting the film’s funky, soulful soundtrack at your family gathering — maybe this is the year to add these elements to the holiday festivities.

It's a good year to do so since it’s the 50th anniversary of the film and the pioneering music which helped make it famous, songs written, composed and performed by the late, great Curtis Mayfield. Check any “best funk albums” list in print or on the Web and it’ll have the Super Fly soundtrack at or near the top if it’s worth a damn. At the time of its release, it was hailed for the social and political messages it delivered. Today, it is revered in hip-hop as an essential influence on the genre, with one of its most recognizable tunes,
“Pusherman,” having been sampled on more than two dozen rap tracks over the years.

Super Fly has lived a couple of lives now, back in the 1970s initially, when director Gordon Parks Jr. first told the tale and then just a few years ago with Director X updating the story for new generations of fans. The version directed by Parks – whose father was the iconic American photographer and writer Gordon Parks — chronicled the struggle of cocaine dealer Youngblood Priest trying to leave the drug trade and go straight. Actor Ron O’Neal was the vision of cool in his pristine white suit on the album cover, standing appropriately in the shadow of Mayfield’s pensive profile.


In my childhood home we had a copy of the album in our vinyl stacks and my folks seemingly had no qualms about their seven year-old son spinning the record at his whim. I loved the sound of the music and Mayfield’s delicate, vulnerable falsetto. I was much older when I realized he’d taken the stark subject matter of the film and translated it into one of the 1970s’ important music commentaries on social issues like drugs, poverty and the so-called “American Dream.” It made me love the album all the more.

What in the world does any of this have to do with Easter, one might wonder, particularly since Super Fly wasn’t a spring debut but was released later in the year? It’s not blasphemy to note that the film and the Bible both are rife with hustlers, prostitutes, gangs and murder. So, there’s that connection. And, at its core, Super Fly is essentially a death and resurrection story. It’s the tale of a man trying to transform into a better version of himself, against all odds and with obstacles levied by Judas-like drug disciples and Pontius Pilate-like cops. For goodness’ sake, the protagonist is even named “Priest.”

But the movie aside, the Easter season always reminds me of a trio of songs from the album, a trinity if you will, that recall the Easter story in some ways. Mayfield is one of rock and soul’s legends, a member of the Rock and Roll Hall of Fame act The Impressions and the man who wrote the anthem of the Civil Rights era, “People Get Ready,” which also has religious undertones. Surfing the ‘Net I can’t find anything that confirms he overtly intended to infuse Super Fly’s music with religious themes. Maybe it’s just coincidental that “Freddie’s Dead,” “Super Fly” and “Pusherman” seem to connect to the Easter story the ways they do.


Without getting into the film’s plot, and looking strictly at the lyrics of these songs, there are some Easter eggs to gather. The logical place to start is “Freddie’s Dead,” the album’s third track, because Easter starts with doubt and death. “Everybody's misused him/Ripped him up and abused him,” Mayfield sings. The lines “Let the man rap a plan, said he'd see him home/But his hope was a rope and he should've known,” are agony in the garden-type notions. Christian tenets about prophecy and sacrifice feel evident in those words. When Mayfield sings, “It’s hard to understand/There was love in this man” it recalls the Bible’s centurion who proclaimed Christ’s righteousness following his crucifixion. This is basically the “Christ has died” song of this admittedly weird analogy.

“Super Fly” is the last song on the album’s flipside. It’s noteworthy that “Freddie’s Dead” was the first single released from the album and “Super Fly” followed. The song’s got the feel of “Superstar,” from the Jesus Christ Superstar musical, exultant in tone and encompassing the hero’s story lyrically. From the “darkness of night with the moon shining bright,” comes “the man of the hour, has an air of great power.” Whatever was once questioned as “dumb” or “weakness” in his life has been overcome by enduring the hardships and “gambling with the odds of fate.” Since he “plays for keeps,” he rises heroically. This is the “Christ has risen” song of this admittedly weird analogy. It’s also one of the most beloved tunes from the soundtrack with homage paid over the years by some of hip-hop’s biggest hitters, acts like Outkast, Notorious B.I.G. and Beastie Boys.

The most sampled track of the album is “Pusherman,” (I can hear Ice-T’s “I’m Your Pusher” in my head as I type this), the song in this admittedly weird analogy which represents 2,000 years of preachers evangelizing that “Christ will come again.” These pushermen at the pulpit have the “heavy bread” (of life) that’ll “make your world what you want it to be.” Believers find comfort and solace in these deliverers of the word, they’re “your friend, your main boy, thick and thin.” And, non-believers might read something into the song lyric that proclaims the pusherman is “just a hustler in spite of myself.”

Whatever you make of this admittedly weird analogy, one undeniable truth is the music from Super Fly hits on a spiritual level today, same as it ever has. The songs Mayfield created for the movie touch on issues still relevant to life in the United States, including some problems all the thoughts and prayers of 50 years haven’t resolved. The soundtrack has surpassed the film both in terms of financial success and cultural impact.

Super Fly has appeared on all three iterations of Rolling Stone’s oft-updated 500 Greatest Albums of All Time and was added to the Library of Congress’s National Registry for its cultural and historical significance. Its title track was picked by the Rock and Roll Hall of Fame as one of 500 songs that shaped rock and roll. Apart from any connections to Christianity’s Easter story, intended or coincidental, the Super Fly soundtrack is a bit of a religion all its own.
KEEP THE HOUSTON PRESS FREE... Since we started the Houston Press, it has been defined as the free, independent voice of Houston, and we'd like to keep it that way. With local media under siege, it's more important than ever for us to rally support behind funding our local journalism. You can help by participating in our "I Support" program, allowing us to keep offering readers access to our incisive coverage of local news, food and culture with no paywalls.
Make a one-time donation today for as little as $1.