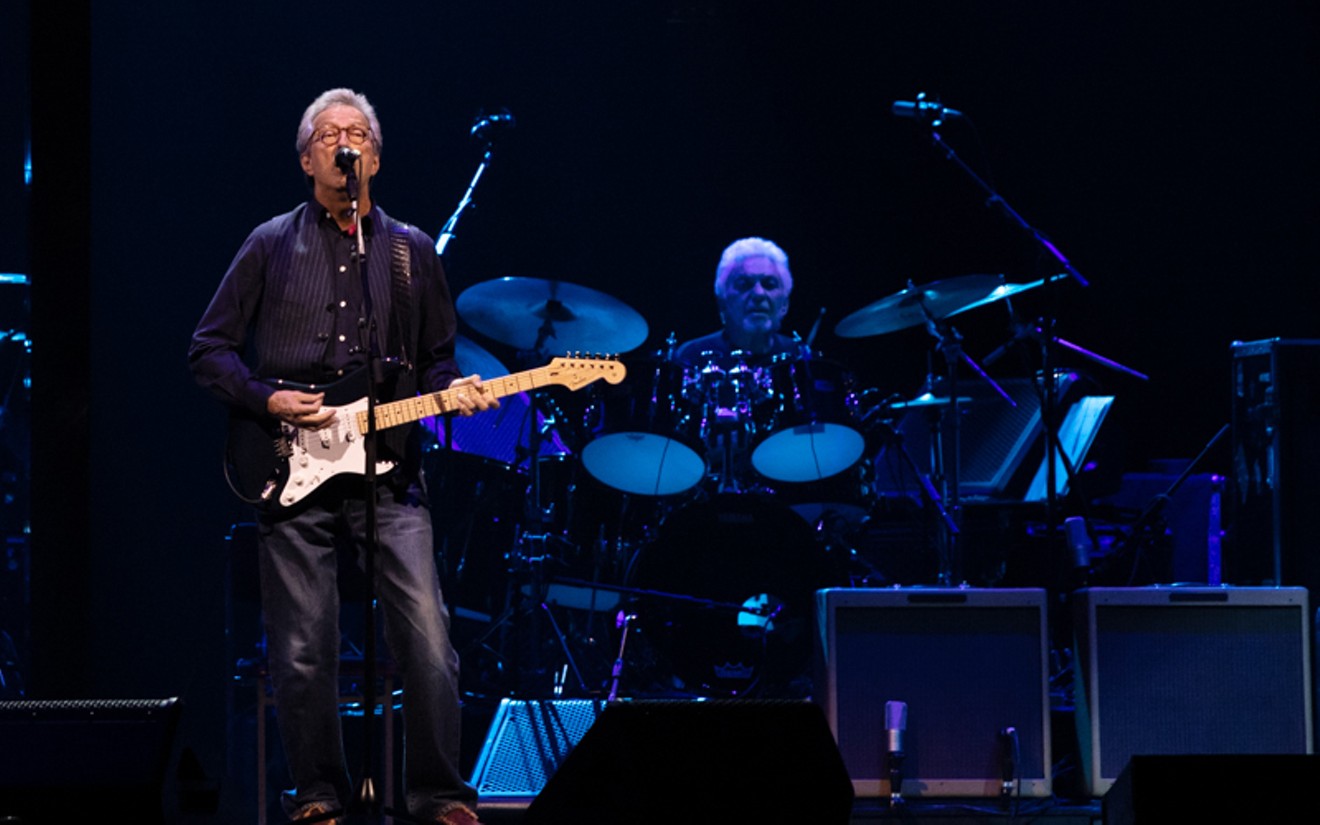 Eric Clapton let his music do the talking Photo by Violeta Alvarez
In recent years, Eric Clapton has made more headlines for his anti-vaccine and anti-lockdown views than for his music; the last song and accompanying music video he released in August 2021 is called "This Has Gotta Stop," which is a protest song against COVID-19 lockdowns and vaccinations. He previously recorded a song called  "Stand and Deliver," on which he collaborated with Van Morrison which is an anti-mask, anti-lockdown single, with the proceeds benefiting Morrison's  "Lockdown Financial Hardship Fund".

I don't agree with Clapton's views on vaccines; millions of people around the world have taken them with just minor side-effects and I believe the scientists who tell us the benefits of the COVID-19 vaccines outweigh the risks in the majority of people. In fact I go so far as to support mandatory vaccinations which are more popular than many believe if you look at the polling numbers on this issue.

I do have sympathy for musicians who have lost income do to lockdowns and for Clapton himself who has said that he had severe reactions after taking two doses of the  AstraZeneca vaccinations in the U.K. Clapton has recovered from those symptoms however, since he did perform successfully in concert here in Houston last night, as he has been doing all along during his current tour.

I am a fan of Clapton's music, and I believe that's okay even if I disagree with him on Covid-19 issues; in fact it's probably impossible to find a musician, actor, or artist who you agree with 100 percent with on every issue, isn't it?

As far as the concert at Toyota Center, I have to say I enjoyed it; it was probably the most relaxed, laid-back concert I have ever attended in fact.

It seemed like the vast majority of people in attendance were not wearing masks; a friend told me that since Clapton is an anti-vaxxer that is predictable and he influences their behavior, but I'm not convinced that Houstonians would not do the same thing at any show no matter who is performing.

But anyway, Clapton did not mention any of his controversial views and in fact he did not say a word to the crowd at all and let his music do the talking; this was a good thing.

Clapton started off the show with some blues songs then performed his cover of Bob Marley's "I Shot The Sheriff" followed by an acoustic set featuring the songs "Tears In Heaven"  and "Layla," the latter accompanied by hand clapping from the audience.

This was not a greatest hits concert and I'll admit that many of the songs Clapton played I did not recognize, though I did recognize the quality musicianship and performance of each of the songs performed. 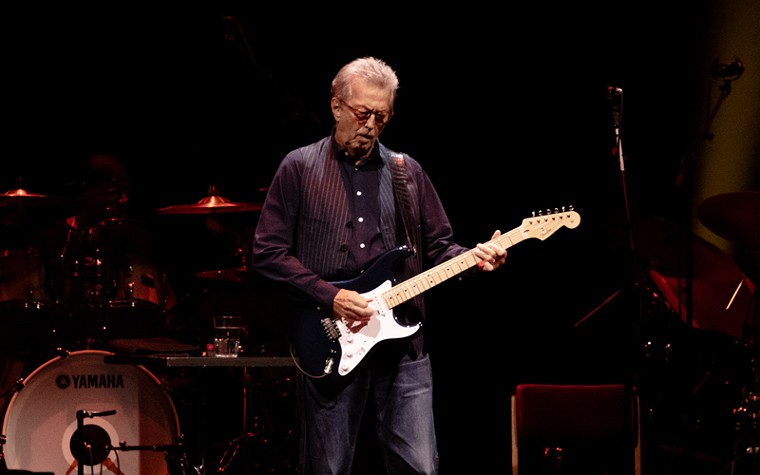 Clapton stayed off his anti-vax soapbox for the night.
Photo by Violeta Alvarez

"Wonderful Tonight" got a good crowd reaction and "Cocaine" probably got the loudest response with people cheering and jumping to their feet during its performance; after the slightest pause in concert history, Clapton returned onstage for a short encore to perform a song with opening act and fellow blues rock guitarist Jimmie Vaughan, the older brother of late Texas blues guitarist legend Stevie Ray Vaughan.

And that was it. The concert ended and though I would have liked to have heard some Cream songs and more Clapton classics it felt like a satisfying show and ending; it was.

I understand some people are angry at Clapton for his anti-vaccine views and one friend messaged me to say, "I get why you like him, but he's kind of an asshole. And, to me, his music isn't good enough to make up for that."

I have to disagree with that though; maybe I'm naive, but the lyrics, feel, and messages of Clapton's music indicates to me that he is a good person who cares about other people as well, despite how misguided I feel he is on his views about lockdowns and vaccines.

On the other end of the spectrum is a friend I invited to attend the concert with me who afterwards said it was the best concert he ever attended. He is 62 years old and has been to many rock shows throughout his years; his opinion carries some weight with me.
KEEP THE HOUSTON PRESS FREE... Since we started the Houston Press, it has been defined as the free, independent voice of Houston, and we'd like to keep it that way. With local media under siege, it's more important than ever for us to rally support behind funding our local journalism. You can help by participating in our "I Support" program, allowing us to keep offering readers access to our incisive coverage of local news, food and culture with no paywalls.
Make a one-time donation today for as little as $1.
David Rozycki
Contact: David Rozycki