Fred Durst of Limp Bizkit performing at The Roxy Theater in Los Angeles on December 3,2019 Photo courtesy of Quintin Soloviev's Youtube video
Over the past few weeks, as most of us try to maintain a normal life and schedule around the holidays, a number of history-making concerts have gone down. While some rushed across the United States to witness a band's final performance, others were in a different part of the world setting another band's instruments on fire.

Since the birth of metal, fans of the genre have had a chaotic reputation. From old footage outside of Metallica concerts, to new age “fight club” mosh pits, metalheads bring the aggression with them to the shows and usually have an outlet to expel the angst. But on November 30, at Knot Fest Mexico, things turned for the worst.

Due to a break in the front barricade that holds the crowd from the stage, the concert was halted. Organizers attempted to fix the broken barrier but were unsuccessful. As time passed, no word from officials or festival staff was made, agitating the waiting fans. After almost two hours, the festival announced that the remainder of the performances had been postponed due to safety concerns, and Slipknot would not be playing. 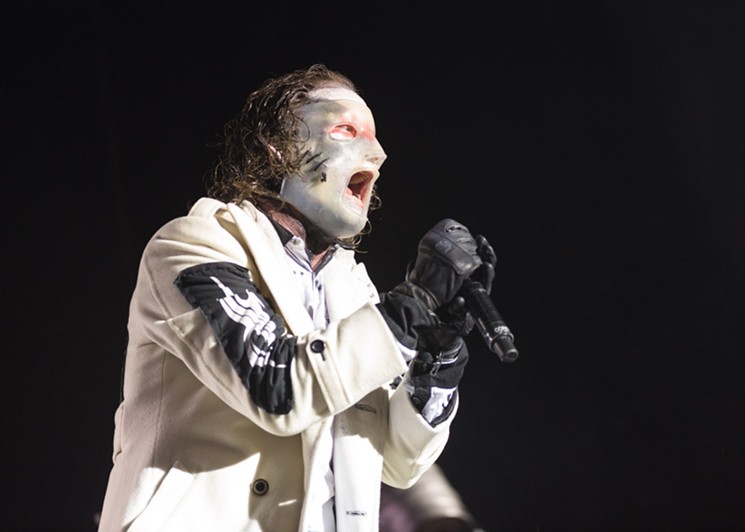 Slipknot vocalist Corey Taylor at The Woodlands, September 2019.
Photo by Jennifer Lake
Outraged, the metal fans turned to anarchy as they destroyed the festival. Mobs pushed through the broken barricade and stormed the stage, demolishing hard rock act Evanescence’s set and gear. Videos were quickly shared though social media of the crazed festival goers setting fire to the band's drumset, dancing around the flames as a bonfire.

Bands around the world turned to social media to show their disappointment of the festival guests and how appalled they were by their actions. This is the second time in a short span that festival attendees have directly disrespected a performing artist, having booed multi-platinum recording artist Drake off-stage at this year's Camp Flog Gnaw Festival earlier this month.

All the while this was happening in Mexico City, the same night, legendary heavy metal pioneers Slayer were saying farewell as they played their (supposedly) final show to a sold out crowd in Los Angeles. Fans and celebrities from all over came to watch as the iconic thrash metal band completed their 18-month trek around the world for their Final Campaign Tour.

Formed in 1981, Slayer has been one of the most dominate names in heavy metal. With 12 studio albums, Grammy wins, and some of the most iconic songs and albums in heavy metal such as “Raining Blood” and “South of Heaven”, Slayer’s farewell hit deep for many. Most metal bands if not all have been influenced in some way or another by the renowned metal gods. Hip-hop superstar Post Malone, comedian Bill Burr, and Aquaman actor Jason Mamoa, were all spotted in attendance at the show, with Mamoa and his family being brought on stage to help former Pantera vocalist Phil Anselmo sing famed Pantera song “This Love” during the opening set.
And just days after the city of Los Angeles was just recovering from the farewell to Slayer, the city then welcomed the return of famed nu-metal band Limp Bizkit. After re-forming with their original lineup and a few surprise festival performances over the summer, Bizkit announced a small intimate performance for December 3 at the Roxy. Decked in a Santa suit, vocalist Fred Durst performed a fun, high energy set, singing Jingle Bells numerous times and throwing chickenstrips into the crowd at one point. He was also later accompanied by rapper/actor Machine Gun Kelly to perform Bizkit’s hit “Break Stuff.”
All in all, rock concerts are still as unpredictable as ever but offer a chance for once in a lifetime experiences. Hopefully Durst and the rest of his crew bring the chicken-slinging madness on the road and grace the great state of Texas.
KEEP THE HOUSTON PRESS FREE... Since we started the Houston Press, it has been defined as the free, independent voice of Houston, and we'd like to keep it that way. With local media under siege, it's more important than ever for us to rally support behind funding our local journalism. You can help by participating in our "I Support" program, allowing us to keep offering readers access to our incisive coverage of local news, food and culture with no paywalls.
Make a one-time donation today for as little as $1.