María Zardoya Photo by Violeta Alvarez
Not many culinary experts would list Mr. Gatti’s pizza on their “best pizza” lists. As a teen I delivered (and ate) lots of pies from the Texas-based pizzeria. I love it still today. I have to admit it’s not the best pizza I’ve ever eaten, but it is my favorite.

So, this is not another “best of” list, the kind you’re surely exhausted of by now. Instead, it’s a Gatti’s deep dish pepperoni with extra provolone. A hearty meal of my favorite shows of 2022, in small, medium and large sized venues, the ones that were most fun to attend or included certain offstage elements that made for a memorable slice of life. The music and showmanship was exceptional in these instances too, but all the other ingredients helped create something better than just “the best.”

Which were your favorite shows of 2022?

At small local shows, the company you keep is as notable as what’s happening onstage and this show was filled with interesting, talented people all in one, new, interesting place. The End is a cozy, all ages, eastside venue that’s already hosted dozens of concerts. Hardcore, metal, hip hop, ska — they’re unafraid to book anything in that room, it seems. If you haven’t been yet, check its fast-filling calendar, they’re sure to host a show you’ll be interested in for 2023.

I wanted to hear music from the indie rock acts on the bill (and did) but I also enjoyed hearing the musicians’ thoughts on all sorts of subjects while cigarettes were smoked and beers were downed out back of The End in a drizzling rain. I wasn’t interviewing for a story, just picking their music-soaked brains and learning more about their art and their lives, the sort of thing we all do when we’re with other music lovers.

Dogbreth was touring through from Tucson and they’re a solid indie rock band with more than a decade’s worth of tunes to comb through. One member, Logan Greene, was the first person to book my son’s band on a Houston show, at White Swan, 15 years ago. We caught up with him and some folks from closer to home too, our pal and man about town Jacob Calle, who was amped for the Fun Haunts set; Long River Sessions boss Thomas Meeks, whose music video series keeps gaining momentum; and, Taylor Gibson, who lends guitar and vocal skills to Trashkat and Jumprope, two of the city’s hottest indie acts. Gibson isn’t just a talented musician but is also a superb conversationalist, humorous and engaging offstage as she is front and center. It was the sort of night that reminded how rich Houston is with charming and gifted folks who make up our music scene.

Big Top Lounge is the enthralling, entertaining but sometimes underappreciated sister venue to the more renowned and much revered Continental Club, which made it the perfect room to host Linda Gail Lewis. Little sister to the late rock and roll pioneer Jerry Lee Lewis, she’s a remarkable pianist and vocalist in her own right. On a very recent Friday night, she settled into Big Top with her band – her daughter, Annie Marie Lewis and son-in-law Danny B. Harvey – to offer her takes on some timeless hits, many from her big brother’s catalogue and others from his iconic peers like Chuck Berry and Little Richard.

There’s little better than stumbling into a jaw-dropping show you didn’t realize you had to see. We weren’t at Lewis’s show on assignment, there was no review to write for readers. We were just making the rounds as part of a birthday celebration for a friend who really loves Linda Gail Lewis. (And Lewis apparently loves her, too, since she got a personalized rendition of the birthday song from the star of the show). Once we were there, we were almost ashamed to admit we’d nearly skipped it. Harvey has played with everyone from Johnny Ramone to Nancy Sinatra to Wanda Jackson and once started a band called The Head Cat, which featured none other than Motorhead’s Lemmy. He picked away at the classics with a beaming smile as we stood mere feet away in awe.

What made the night one of our favorite shows of the year were Lewis’s between-song monologues, memories of how she and rock and roll came of age together. She told how Jerry Lee came to record for Sun Records, how those recordings took the family from poverty to luxury (a brick house with indoor bathrooms, she recalled), stories of family members like the late Mickey Gilley and her own brush with pop stardom in the 1960s, including a gig on TV’s Shindig. To hear an insider recount the early days of the art form, in a funky little room with a handful of friends and revelers there, what more could one want from a show? 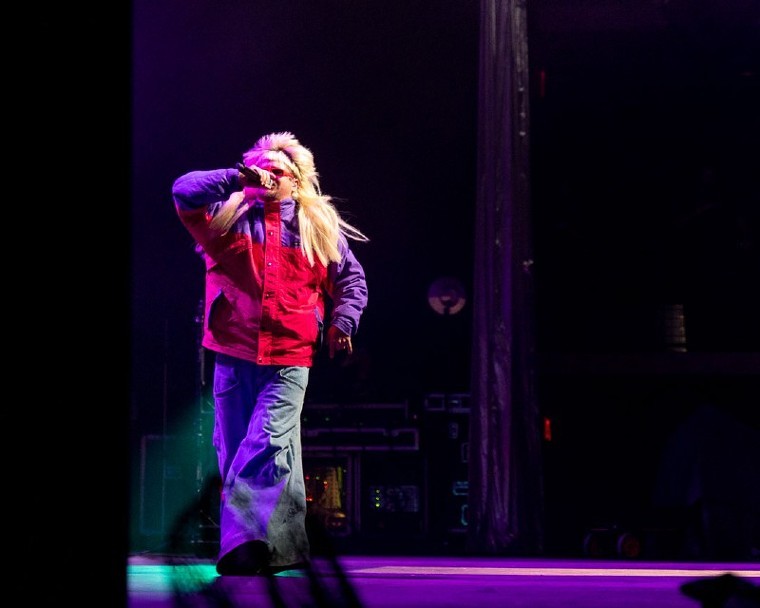 Finding a way to break through all the noise on the modern music spectrum is a challenge for artists but one that Oliver Tree has mastered. The oddball pop-slash-hip hop artist has employed characters, outlandish videos and TikTok fame to create a career that’s just different. And, if we’re not here to embrace what’s unique about music, why even bother?

On video, Tree (or his caricatures) can be irksome, but in concert he seemed to be his true self, sweet and grateful for the thousands who showed at 713 Music Hall on a Friday night for an 18-song set, people who found comfort in his musical self-affirmations during the throes of the pandemic’s lockdown. There were comedic bits and loads of thanks and positive wishes for those who’d bought a ticket. “Just remember, no matter how strange you look, no matter how ugly you feel, you are fucking beautiful!” he exclaimed at the end of the night. We left the hall entertained but also feeling pretty great about ourselves.

The Marías
Photo by Violeta Alvarez

Watching a very good band evolve into a very popular one is fun, especially if you found the band early, before its obvious talent was obvious to broader audiences. That’s how I felt watching The Marías deliver an impeccable set on the lawn at White Oak this fall, just a couple of seasons removed from the smaller, indoor set they’d delivered in February there. I’m not sure there’s a word for it yet (let’s come up with one, y’all) but the sense of pride we feel when a band we attach to early on, before it explodes into greater notoriety, it needs its own universal term.

Speaking of pride, it was on full display in terms of Latin cultures at the show, a lovefest stoked by the band’s namesake and frontwoman María Zardoya. She was in full command of the show, so assured that our concert review likened her to the ancient deities, and the legions of young women in the audience swooned for their confident, successful role model. Anyone who’d read our interview with Zardoya just months earlier would have known the first sprigs of a blossoming career made her anxious. Seeing her dominate the night was a sign that that anxiety had waned. Watching a very good band evolve into a popular one is fun, but watching an artist evolve from uncertainty to self-assuredness is even better.

Just like Sly and the Stones, music in our household is a family affair. Half of the people who grew up here record music and perform it for their careers. Because they are so busy on the road, getting everyone together requires some logistical planning. But, when Billy Joel’s 2022 Houston show was announced, the dad here bought enough tickets for everyone to attend without consulting calendars or tour dates.

Pete Vonder Haar wrote the Houston Press’s review of the Piano Man’s latest Houston date and you can read his thoughtful account for the play-by-play. I’m just here to say that this was one of my favorite shows ever because the whole family was on hand. Joel and my wife and I go back to the early 1980s, over 10 shows together, my wife’s first ever live concert and Joel once apologizing to her from onstage for dropping a mic stand on her head (!) His music soundtracked our early and ongoing relationship.

Hearing the kids sing songs they grew up listening to (whether they wanted to or not) was incredible. They had their takes – calling it “surreal” when the entire arena sang along to “Piano Man” and dancing to “Zanzibar” or "The Longest Time," which they once covered.  To be honest, it felt a little full circle and elevated to concert-going experience into something spiritual. If you can get that feeling from a live show, allow it to permeate every pore. It’s a high I’m still on months later.

Of course, the high was further amplified by seeing Joel again two weeks later on his home turf, in New York City, at Madison Square Garden. Joel has maintained a regular residency there since 2013. My wife and I took in the 84th show of his residency to commemorate the first year she saw Joel (1984) and our 10th time seeing our favorite artist together.

Aside from the emotional, mushy, husband and wife stuff, seeing a favorite act out of town was a thrill and one I’m advocating here. If you can see a band you love in Houston, please do it. Our venues – small, medium and large sizes– need you there. But if you can see a band you love out of town, go do that, too. Take a few days to enjoy the city you’re visiting and the people who live there. Eat with the locals in Jackson Heights. Drink a beer in the Castro. Visit the zoo in Washington, D.C. (the actual zoo, not the political one). And then listen to the band you traveled there for and how its music hits differently in that different locale. That made for a favorite show in 2022 and I can’t wait to do it again in the new year.
KEEP THE HOUSTON PRESS FREE... Since we started the Houston Press, it has been defined as the free, independent voice of Houston, and we'd like to keep it that way. With local media under siege, it's more important than ever for us to rally support behind funding our local journalism. You can help by participating in our "I Support" program, allowing us to keep offering readers access to our incisive coverage of local news, food and culture with no paywalls.
Make a one-time donation today for as little as $1.