It Was (Mostly) Smooth Sailing on Fish and Dayton's Maiden Voyage 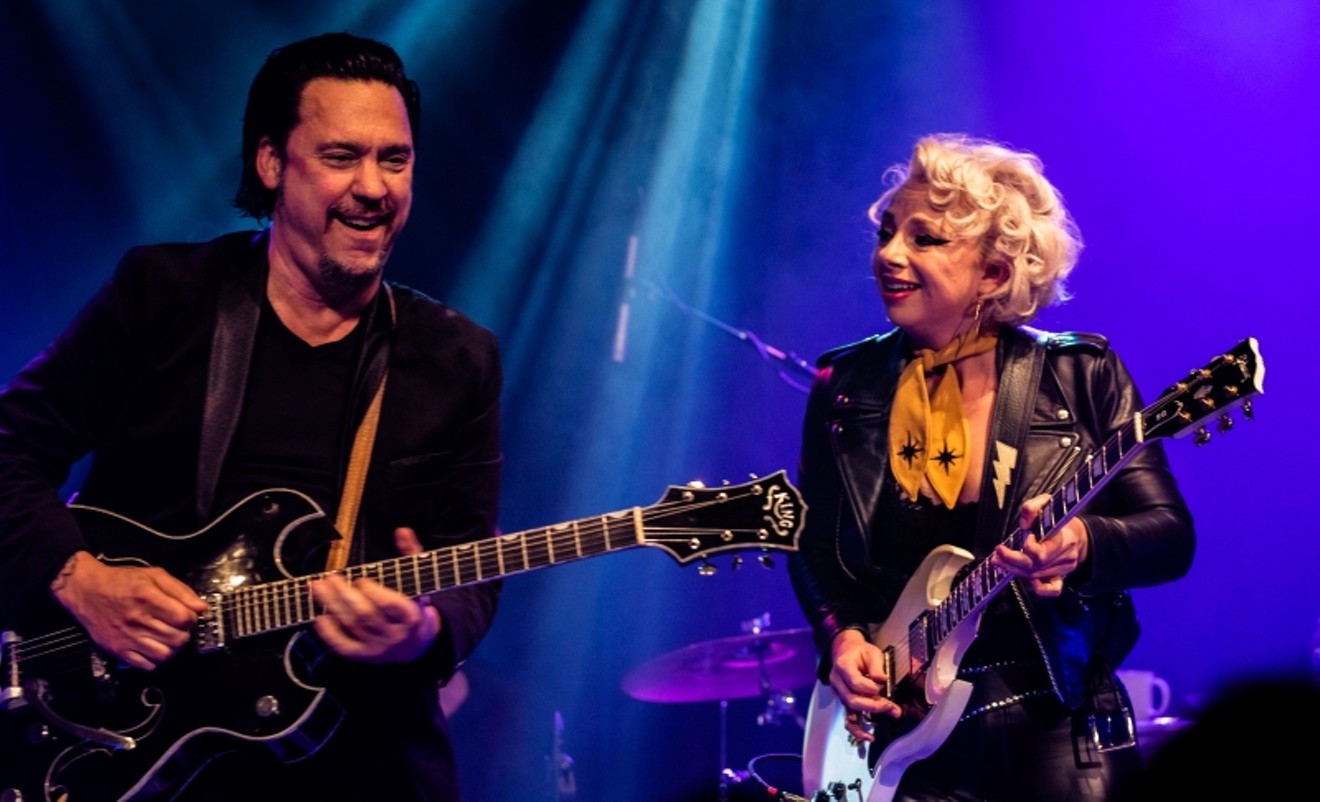 Guitarists Samantha Fish and Jesse Dayton performed Sunday at the Heights Theater, giving the Houston audience a preview of their forthcoming album. Photo by Patrick Alcala
The world of popular culture has brought us many memorable duos. Batman and Robin. Tracy and Hepburn. Thelma and Louise. Lucy and Ricky. So has the world of music. Sam and Dave. The Righteous Brothers. The Everly Brothers. The White Stripes. Add to that list Fish and Dayton.

The pairing of Samantha Fish and Jesse Dayton makes so much sense that it’s a wonder they have only recently joined forces. When Fish spoke with the Houston Press a few weeks ago, she said that the notion of a musical collaboration had been simmering on the metaphorical stove for some time. Fortuitously, Texan Jesse Dayton emerged as a candidate, and after some preliminary writing sessions, the duo began recording together. 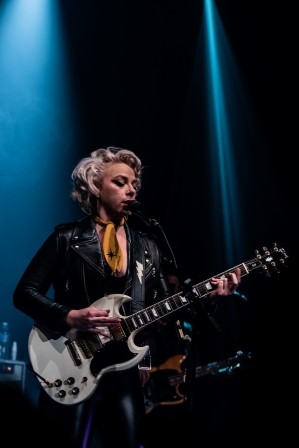 Samantha Fish had been planning a musical collaboration for some time, and she has found the perfect partner in Jesse Dayton.
Photo by Patrick Alcala
Their record won’t drop for a few months, but fans at the Heights Theater on Sunday got a sneak preview of the forthcoming release. The combination of the two is intriguing. Both have serious guitar chops, but they approach the collaboration from different directions. While not exactly a bluesy rocker (rocky blueser?), Fish’s blues are of the eclectic variety and definitely informed by ‘70s rock and roll. Dayton, conversely, has more of a country background, having played on albums by Waylon Jennings and Johnny Cash, plus co-writing the latter-day classic “I’m at Home Getting Hammered (While She’s Out Getting Nailed).”

Does it work? You bet!

The members of the crowd were in a festive mood, with many knowing that they had the next day off for the MLK birthday holiday. (“Gee, we really drank a lot,” said the woman who was closing out her bar tab beside me.) Fish and Dayton seemed to be aware of this dynamic, opening with a scorching cover of “Brand New Cadillac,” a song featured on their recent EP The Stardust Sessions. All the musicians were dressed in black, which – as Henry Rollins has taught us – is the color of rock and roll.

While the show was a co-billing (with Fish listed first), Dayton served as the evening’s emcee / host / ringmaster, at least initially, counting off songs and engaging the audience. The relationship between the two seems to be that of an older brother and younger sister, with Dayton, both supportive and generous, maintaining a firm hand on the throttle while making sure that Fish got her much-deserved props.

However, this shouldn’t be perceived as a patriarchal arrangement. Fish has been gigging since she was a teenager, but Dayton is a grizzled road warrior and of an age where the two of them – to borrow a line from Dan Jenkins – couldn’t have even taken an elective in high school together. Of the two, Dayton is the more natural showman, always relaxed and well at ease, even when he is tearing up the fretboard.

Dayton frequently went from zero to 60 during the first couple of tunes, but it took Fish a bit longer to get in the groove. She seemed to be having some gear problems – lots of kneeling down to tweak effects pedals along with frequent tuning —  and her guitar and vocals sometimes rode a bit low in the mix. At one point, she experienced technical difficulties with one of her cigar box guitars and explained to the audience that her guitar tech was having to “tape it together.”

Dayton said, “You know we’ve got to get a little Texas boogie in there,” giving a shout-out to Billy Gibbons as the band tore into a cover of the Rolling Stones’ “Hip Shake,” at times veering close to ZZ Top’s “La Grange” while throwing in a bit of AC/DC’s “Whole Lotta Rosie.”

Those problems were, by and large, sorted out quickly, and things began to get serious, with the audience hearing the guitar pyrotechnics that had been promised. The set proceeded at a brisk pace, with very little mucking about between songs. The musicianship was top-notch, and the band (two guitars, keyboards, bass and drums) was tight, nailing the end of each song with precision and authority.

The 1963 Barbara Lewis hit “Hello Stranger” was an early highlight, with Fish delivering an appropriately sultry take on the R&B classic while both guitarists soloed using octaves, evoking the sound of jazzer Wes Montgomery. Similarly, “I Put a Spell on You” had Fish front and center, showcasing her dramatic vocals. She sounded, at moments, positively Joplin-esque, unafraid to cut loose and display some serious grit.

As the evening progressed, the vibe became looser, with Dayton – while claiming that he wasn’t pandering – remarking, “How about those Astros? We won it fair and square!”

Fish and Dayton both know how to use dynamics effectively, and this was particularly evident when just the two of them performed Townes Van Zandt’s song “I’ll Be Here in the Morning” with Fish on acoustic guitar. This was when the duo seemed to really click, with their vocal harmonies ringing out and mesmerizing the audience. 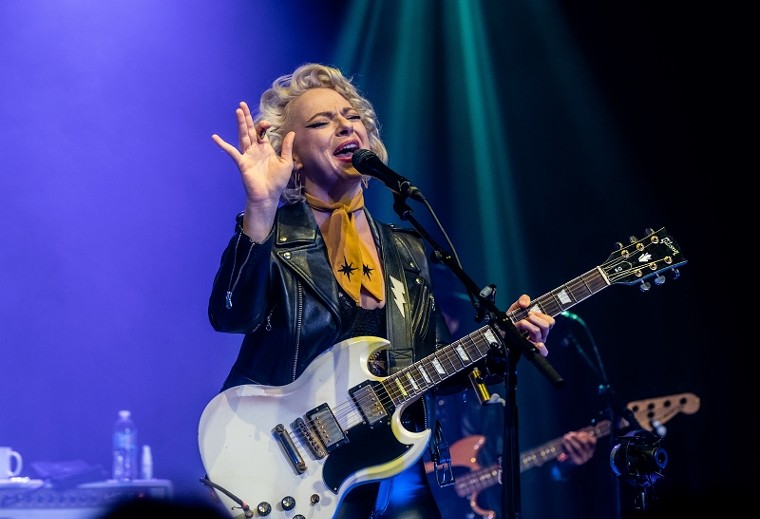 Samantha Fish and Jesse Dayton mesmerized the Heights Theater audience with a set featuring impeccable musicianship and a bunch of Texas shout-outs.
Photo by Patrick Alcala
Things didn’t stay quiet for long, though. As Dayton said, “You know we’ve got to get a little Texas boogie in there,” giving a shout-out to Billy Gibbons as the band tore into a cover of the Rolling Stones’ “Hip Shake,” at times veering close to ZZ Top’s “La Grange” while throwing in a bit of AC/DC’s “Whole Lotta Rosie.” Dayton roamed to the front of the stage for his solos, and Fish engaged in some serious head banging and hair slinging.

Is the Fish / Dayton combo a going concern, or will it be a one-off? Obviously, time will tell, but there is quite a foundation to build on. Both are exceptionally skilled vocalists and guitarists, and they seem to enjoy being onstage together. No doubt both will continue with their solo careers, but it would be a disappointment if they didn’t team up periodically. Things can only get better, and they are damn good right now.

New Orleans guitarist Eric Johanson opened the show to an enthusiastic full house, stirring up the crowd with lots of stinging slide guitar. At one point, he played a bit of Jeff Beck’s “Cause We’ve Ended as Lovers” in tribute to the recently deceased guitar master. Between Fish, Dayton and Johanson, Beck can rest easy, knowing that the tradition of guitar badassery is in good hands.
KEEP THE HOUSTON PRESS FREE... Since we started the Houston Press, it has been defined as the free, independent voice of Houston, and we'd like to keep it that way. With local media under siege, it's more important than ever for us to rally support behind funding our local journalism. You can help by participating in our "I Support" program, allowing us to keep offering readers access to our incisive coverage of local news, food and culture with no paywalls.
Make a one-time donation today for as little as $1.