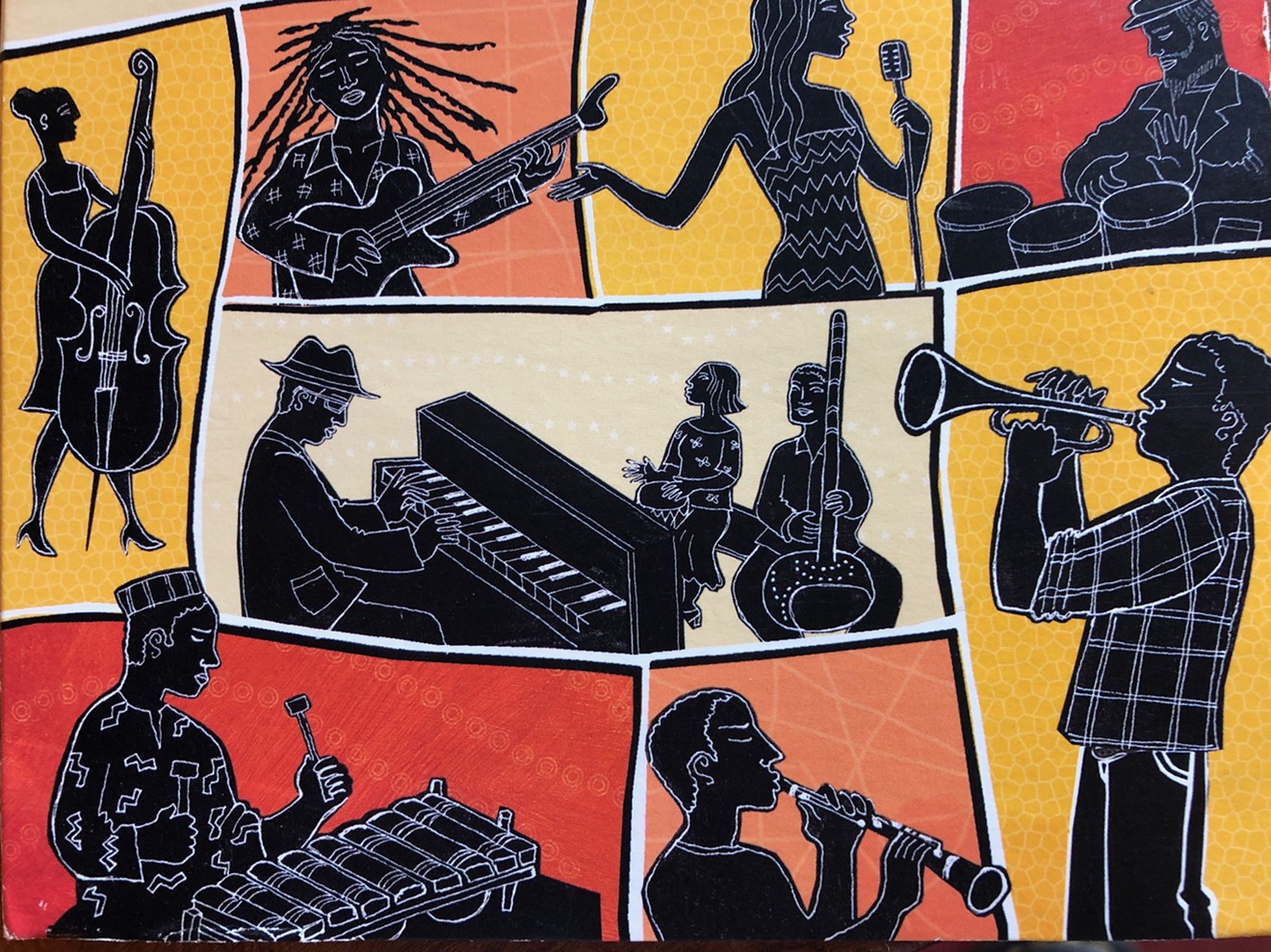 What is world music? According to Dictionary.com it is: “traditional music from the developing world.” In a much broader sense, it is any and all music incorporating different styles from around the globe. It has been popularized in Western culture through pop stars such as Sting, Peter Gabriel, Paul Simon, and George Harrison. It is a musical category with blurred lines and inclusivity.

I think of it as any music that sounds like it was not "made in America." I listen to it when I need to relax, or get my creative juices flowing, or when I am just plain sick of hearing the same old popular music of my upbringing over and over again. Allow it to calm your nerves and influence you in perhaps the kitchen, when rolling out your yoga mat, setting a romantic mood, cycling around town, or practicing your salsa dance moves.  Here’s my list of five world music artists to try out this holiday break while you are unwinding from the hustle and bustle.

Johannes Linstead
Hello from Toronto, the birthplace of guitarist and multi instrumentalist Johannes Linstead. Not an easy artist to categorize, Lintead’s music is often referred to as “world fusion.” Recognizable for his beautiful nuevo flamenco style guitar playing, his music seems to be heavily influenced by the world’s warmer climates. Listening to his melodies and rhythms conjures emotional images of coastal sunsets or Latin American street cafes.

However, Linstead was brought up in the cold Northern beauty of Canada, where he began studying guitar at age 8. He is a local treasure in his hometown of Toronto where he was awarded “Best World Album of the Year” by the Toronto Independent Music Awards in 2017, as well as having had the previous honor of “Guitarist of the Year” in the Canadian Smooth Jazz Awards in 2007.

Fluent in Hung Gar Kung Fu, Qi Gong, and Kundalini Yoga, the spiritually well rounded Linstead founded Divine Earth in 2006. Divine Earth is an online community that promotes the philosophy of achieving a better world through cultivating one’s own inner peace through awareness of world politics, spirituality, health, and wellness.

A.R. Rahman
Namaste from India, birthplace of Allahrakka Rahman, professionally known as A.R. Rahman. The Indian music director, composer, and producer is famous worldwide, but became a household name in 2009 when he won a slew of awards for the score to Danny Boyle’s Slumdog Millionaire. A Golden Globe for Best Original Score, a BAFTA Award for Best Film Music, and two Academy Awards for Best Original Song and Best Original Score to be precise.

Known for integrating classical Indian music, with electronic beats, and orchestral arrangements, Rahman was influenced by his film score composer father. His father passed away when he was nine and at age 11 he began studying under Malayalam composer M.K. Arjunan.

Composing jingles for commercials and scores for small documentaries passed the time until Rahman landed his first film score for the movie, Roja. In 1992 he built his own recording studio, Panchathan Record Inn, the most advanced recording studio in all of India. He was awarded the Padma Bhushan in 2010, the third highest civilian award in India and in 2009 was listed as on of the 100 most influential people in the world by Time magazine. There is a language barrier that might not appeal to all American listeners, but the beautiful phrasing, catchy beats, and infectious joy that comes across in his songs is undeniably appealing.

Gipsy Kings
Bonjour from Arles and Montpellier in the south of France, home of the Gipsy Kings. Although, Hola might be more appropriate as the Gipsy Kings sing in Andalusian Spanish, the native language of their families who fled Spain in the Spanish Civil War of the 1930’s. Originally calling themselves, Los Reyes, brothers Nicolas and Andre Reyes along with cousins Jacques, Maurice, and Tonino Baliardo changed their name to The Gipsy Kings, taking inspiration from their families roots as well as the bands’ beginnings as a traveling wedding, festival, street group.

It took a while for the Kings to take off. Their traditional flamenco style was popular with their local fans but it wasn’t until they collaborated with music producer, Claude Martinez in 1986, that they gained the attention of a broader audience. Martinez recognized the bands’ potential and brought a contemporary flair mixed with Latin American, Middle Eastern, and Afro-Cuban influences.

It wasn’t until their third, self titled album that the Gipsy Kings gained global commercial success. Gipsy Kings spent 40 weeks on the American charts in 1989, something very rare for Spanish language albums. They have had four Grammy nominations for Best World Music Album and won in this category in 2013 for their album, Savor Flamenco. They have been described as “Spanish flamenco and gypsy rhapsody meets salsa funk.”

Ravi Shankar
Namaste once again from India, the birthplace of the ‘Sitar maestro” Ravi Shankar. Often referred to as Pandit, meaning master or guru in Vedic scriptures. Shankar is a composer of classical Indian music who was responsible for popularizing sitar music in the second half of the 20th century.

At the age of 18, Shankar began studying sitar. Six years later, he was already composing film scores and segued to music director of All India Radio shortly after that. It wasn’t until he began touring Europe as a sitar player in the 1960s that he popularized classical Indian music.

His friendship with George Harrison of The Beatles deeply influenced not only Harrison’s music, but his emotional and spiritual life as well. He is quoted as saying, “In 1966, through the grace of God, my life was blessed and enhanced from the sudden desire to investigate the classical music of India ...The music made more sense to me than anything I had ever heard in my life.”

The collaboration inspired “Raga Rock,” rock/pop music with heavy Indian influence, and made Shankar a household name in the West. He played Woodstock in in 1969, but was turned off by the drug and hippie culture. “It makes me feel rather hurt when I see the association of drugs with our music. The music to us is religion,” Shankar said.

His famous children include sitar player Shubhendra Shankar, Grammy Award winning artist Norah Jones, and Grammy-nominated Anoushka Shankar. Ravi Shankar passed away in 2012 at the age of 92. His legacy is huge and it is impossible to summarize it in a few paragraphs, but give him a listen and pay homage to a musical genius and treasured soul of this Earth.

Tracks to try: “Raga Piloo,” “I Am Missing You,” “Shanti Mantra”

Atotoo
Ola from Brazil, birthplace of the band Atotoo. The four piece formed in 2017 and have been intensely rehearsing and polishing their sound they dub, “Mantra-song,” a combination of hypnotic grooves, psychedelia, bossanova, and raga. With influences from India, China, Turkey, Peru, and Tibet, their sound has a global groove that is unlike anything you’ve ever heard.

Gustavito Amaral and Thiago Braz are singer/songwriters who were making music together for years before they met and collaborated with Ricardo Passos and Edson Fernando. Passos is a Portuguese musician who lived abroad for many years studying ancient chains and exotic instruments. Fernando is an experienced Brazilian percussionist who became a scholar of the Indian instrument, pakhawaj.

These unique contributions give, Atotoo, a sound that bridges Brazilian and Indian grooves with sprinkling of flavors from, literally, everywhere in the world. Soon they will be available on Spotify, but in the meantime you can find them on Youtube, Facebook, and Instagram.


Honorable Mentions:
DJ Krush “Beyond Raging Waves”
Ana Caram “Fly Me to the Moon”
Mantra “Monsoon”
Ottmar Liebert “Snakecharmer”
Transglobal Underground “Khalgi Stomp”
Armik “Golden Waves”
Pentagram “One” (Bir)
Jesse Cook "Havana"
KEEP THE HOUSTON PRESS FREE... Since we started the Houston Press, it has been defined as the free, independent voice of Houston, and we'd like to keep it that way. With local media under siege, it's more important than ever for us to rally support behind funding our local journalism. You can help by participating in our "I Support" program, allowing us to keep offering readers access to our incisive coverage of local news, food and culture with no paywalls.
Make a one-time donation today for as little as $1.