Flogging Molly's Dave King Is a Man of the Times 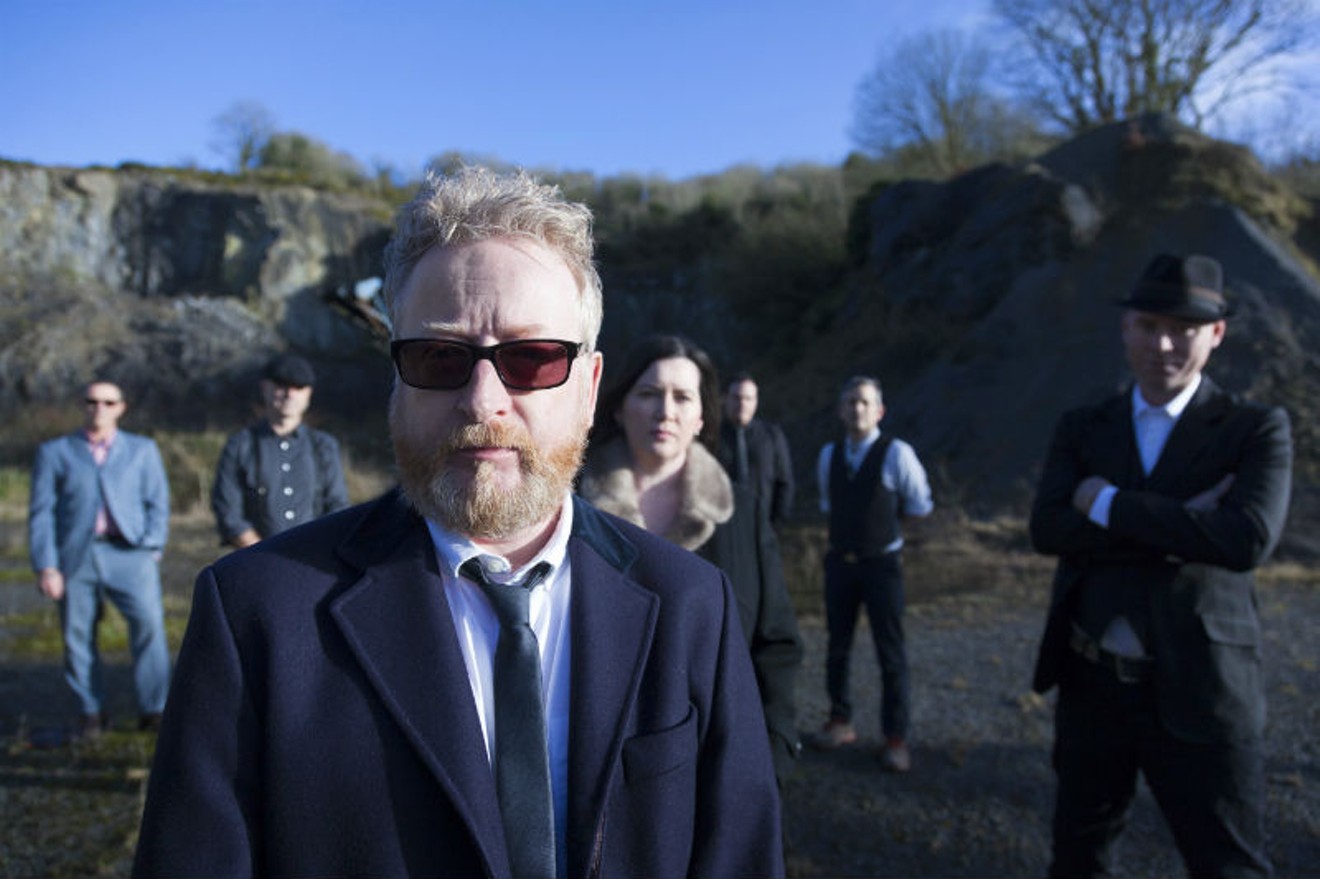 One might mistakenly peg Dave King as sentimental. After all, his band, Flogging Molly, has more than 20 years of successful moments on which to wax nostalgic. Lyrics in songs such as “If I Ever Leave This World Alive,” one of the group’s most popular tunes, do convey a romantic view of days gone by. And, he’s Irish, a culture that is steeped in rich, historical traditions.

But make no mistake, Dave King is a man of the times. He and the band he fronts are present and fully aware of the moment, one that is proving to be simultaneously frustrating and hopeful. That theme is strong in Life Is Good, Flogging Molly’s latest album. King and company visit House of Blues Houston Thursday, March 8, in support of the record. When we ask him about the new songs, the Houston date and the times we’re living in, he’s in Zurich, Switzerland searching for dinner ahead of a show with Dropkick Murphys. The bands are on the verge of closing out a brief European tour together when we catch up.

“It’s been great with the Dropkicks, by the way, it’s been unbelievable,” he says. We note that some music followers might be pleasantly surprised to hear that, as the acts are sometimes viewed as the Celtic punk versions of Biggie and Tupac, with Dropkick Murphys putting up for the east coast and Flogging Molly reppin’ the west. King calls this thinking “rubbish,” (and even hints at the possibility the bands might bring their tag-team tour to the States) but uses the faulty notion to comment on life outside the rock arena.

“I’ll tell you what,” he says, “with the world divided the way that it is right now, isn’t it great to see something like this happen?” 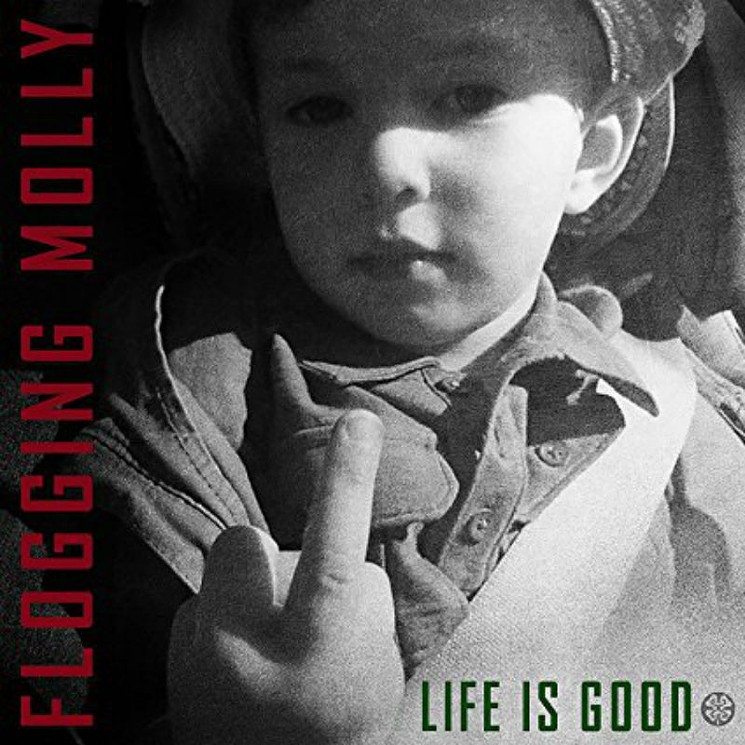 The cover art for Life Is Good features King's godson
Album art
The world is divided, an idea not lost on King and his band mates. One song from the new album is “The Hand of John L. Sullivan,” which touches on the world's first heavyweight champion of gloved boxing. Sullivan was Irish-American and the son of an immigrant, so the song connects like a haymaker in this day and age of DACA.  The album's opening track is “There’s Nothing Left, Pt. 1.” With references to the dynastic emperor Constantine and lines about a devil “who’s not very bright,” we ask if King sees the band as political punk rockers.

“I think we’re just very of the moment and it really all depends when in actual fact we’re writing, what’s going on around us at the time is what affects what’s going on with the writing of the songs,” King said. “There’s that element to it, where it’s so much in your face that it kind of kicks you in the face every now and then, and you cannot but put it into your songs because it’s relative of the times. And, unfortunately, the thing is, sometimes when you look at it from the very first album to this album, not a lot has changed, you know?”

Sometimes, though, change for the better does occur and it can occur in the least expected places. King was born in Ireland and he and his wife and band mate, Bridget Regan, live there when the band breaks from its busy tour schedule. He’s optimistic about recent social reform there.

“I remember, for example, when I wrote 'Drunken Lullabies,' the song itself, it’s about is Ireland ever gonna change or are we just gonna sit around and drink and talk without anything ever happening?” King said. Recent  changes in the country make the song celebratory for him today, 15 years since he penned it.

“And that song has a whole different meaning to me right now. It’s like, things can change. That’s what’s really weird about songwriting. When you write a song, hopefully things will improve.”


Flogging Molly seems to hit Houston just ahead of St. Patrick’s Day annually, so we ask King what’s the best, most respectful way to honor the Irish heritage when the date rolls around. Because he’s a man of the times, he suggests celebrating present-day Ireland and gives us more reasons to do so.

"The Ireland of today is completely different than the Ireland that I certainly grew up in and that in itself should be celebrated. I come from a country where, up until 1993, even admitting you were gay was a jailable offense. And we became the first country in the world to legalize gay marriage," he noted. "Now, we just voted in last year our first openly gay, son of an immigrant prime minister. Ireland’s economy has grown three times more than any other European country right now, which is incredible.

“And also, yeah, we were great drinkers for a reason – because there was fucking nothing else to do, you know? We could literally just drown our sorrows. But I think it’s turned into a celebration. If you look at the rich history and culture of Ireland, especially the writing and the storytelling, our president at the moment, Michael D. Higgins, when you hear him speak it’s just pure fucking,.. it’s amazing. He’s just such an intelligent man and he loves Irish culture and it bounces off you, you know?"

Life Is Good released last year, so we ask which songs are resonating with audiences. We’re not startled to learn one is a track titled “The Days We’ve Yet to Meet.” Another is the title track, which is bound to join  perennial favorites like “The Likes of You Again,” “The Seven Deadly Sins,” and “Float.”

The band marked its 20th anniversary in 2017
Photo by Richie Smyth, courtesy of Night Owl PR

“The actual title track itself 'Life is Good' is really starting to click with people because it’s about my mother. My mother passed away a little over a year-and-a-half ago, two days before Christmas and she said to me and Bridget, she said, ‘Do us a big favor, will ya?’ she says, ‘Enjoy yourself, ‘cause I surely did.’ So that always resonated. It’s a song of joy actually, even though it’s quite a daunting-sounding song. It’s not, it’s a very positive song.”

Of course, King is able to look back at his time in music, which famously precedes Flogging Molly. He was a member of the 1980s British rock act Fastway, which included Motorhead guitarist “Fast” Eddie Clarke. Clarke passed away in January.

“I mean, Fast Eddie will be always a dear, dear friend of mine. He was such a character, I mean he really was. The stories I could tell you, I’d have to write a book about,” he says. Then he shares one quick tale.

“We were doing our first ever tour with AC/DC. The night before the tour started I think we were in Vancouver, in Canada, and we went out to dinner with our management and they took us to this Japanese sushi restaurant,” he recalls. “Eddie got particularly saucy, shall we say, and he went to put his hand down on the table and he smashed a sake bottle into his hand. I mean, this is like the night before the American tour with AC/DC. I mean, Christ, you know? We got him to the hospital and the first show, the roadies had to tape the guitar pick into his hand. That’s how bad it was.”

Maybe King’s never had a pick taped to his hand to play, but he’d be the first to admit to his share of moments over 20 years with the band. He said group chemistry and a lot of luck has kept Flogging Molly going. They’re forward moving, but we ask King to peer back at the beginning, just this once.

“When we first started, when we were told we were going to be on the Warped Tour, we were like, holy Jesus, how are we going to do that, you know? We’ve got fiddles, we’ve got accordions, banjos and mandolins. The kids are gonna fucking kill us,” he said. “I remember walking out and every day you’d see the reaction on the kids’ faces where they’d look at you and go 'What the fuck is going on here?' And then you’d start playing. And then, halfway through the first song, you could see them actually looking at each other and smiling and then dancing — and then the mosh pit happens. And it was incredible.”