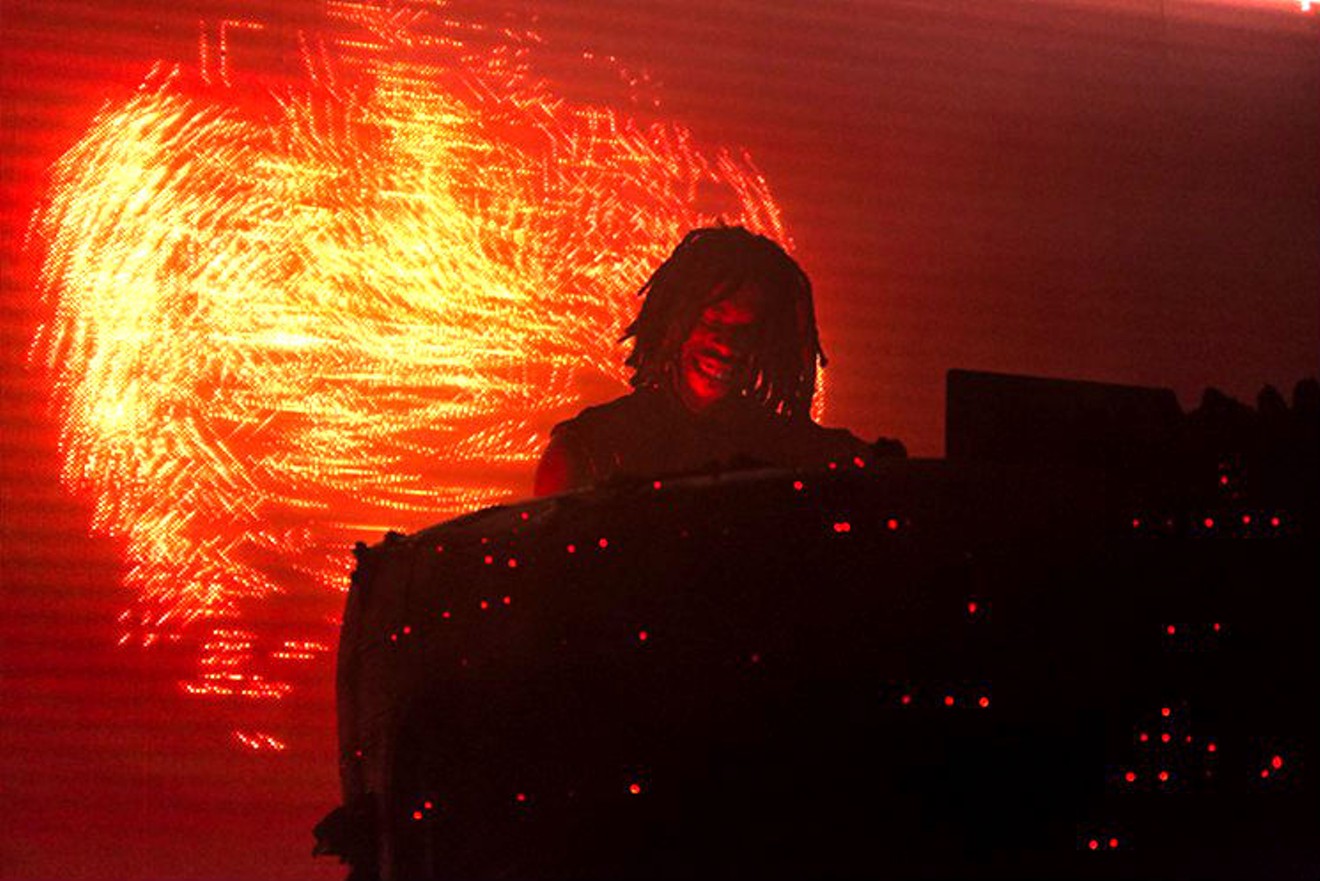 Flylo DJ'd while flames danced behind him. Photo by Jennifer Lake
“Stay tuned to some words by Captain Murphy” waved across the screen like heat rising off the summer asphalt. Audience members adjusted their 3D glasses as the words on screen morphed into the bald, bearded, larger than life cartoon character that first appeared on an Adult Swim mixtape and YouTube almost a decade ago.

The cartoon, donning reflective shades and beard which melted into his face, seemingly floated over the heads of audience members who reached up as he began to speak. Captain Murphy is the cartoon alter ego of Flying Lotus, the Los Angeles producer. DJ, rapper, and filmmaker.

Flylo showcased his latest work Flamagra.
Photo by Jennifer Lake
The artist, going by the name Flylo, touched down in Houston on Friday at downtown’s Warehouse Live to showcase his latest work, Flamagra, a mashup of different styles featuring musical artists like Solange and George Clinton and even filmmaker, David Lynch. Lynch, best known for creating films like Mulholland Drive and his surreal series Twin Peaks, might seem out of place until one sees the level of work that Flying Lotus puts into cultivating a visual experience.

The addition of 3D glasses gave the DJ the ability to create an experience which almost overloaded the senses. As Flylo stood center stage behind a red, illuminated DJ booth the screen behind him projected images making it appear as though the crowd was floating through a tunnel with the stage. The audience swayed back and forth as billows of weed and vape smoke filled the air.

As the music changed pace, the environment adjusted. Blue shimmering lights danced around the room like fireflies as the music slowed to a crawl. A pathway through a barren wasteland flashed on the screen as Flying Lotus sped up the tempo. At times it appeared as though the artist was DJing in a ring of fire as flames danced around the stage and then rolled over the delighted crowd.

The show was not just about Flamagra with the iconic head from his 2014 release, You’re Dead. The crowd cheered as the head, featuring a very prominent hole where the face would be, fired rings of light and sound into the room. The cement floors of the venue rumbled as the bass from the speakers pulsated through the room. Flylo, dreads shaking, bounced along with the crowd, stepping out from behind the booth a rapping while images of lightning and a man being split in half flashed on screen behind him.
KEEP THE HOUSTON PRESS FREE... Since we started the Houston Press, it has been defined as the free, independent voice of Houston, and we'd like to keep it that way. With local media under siege, it's more important than ever for us to rally support behind funding our local journalism. You can help by participating in our "I Support" program, allowing us to keep offering readers access to our incisive coverage of local news, food and culture with no paywalls.
Make a one-time donation today for as little as $1.