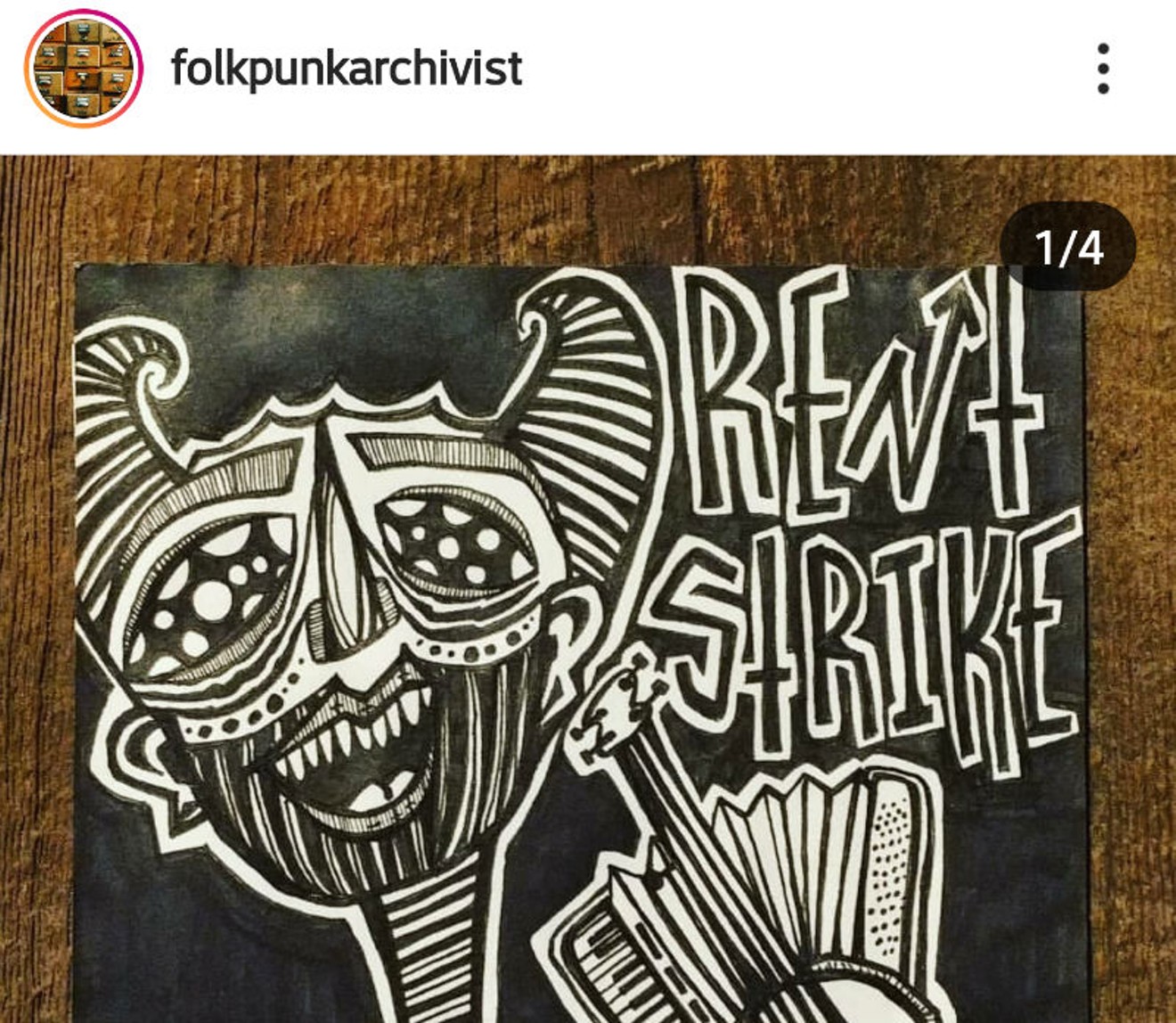 The folk punk genre has its share of skeptics. Type the words into your Google search engine and plenty of derisive tropes and snarky memes will populate. But, maybe now more than ever, you’ll also find a broad and acclaimed array of music from diverse artists whose blend of folk music’s activism and punk’s urgency is just right for the times.

There are lots of ways to delve into this music, from finding playlists on Spotify to seeking out the music on YouTube (Pagefire’s “How To Make Folk Punk” is a recent, humorous and on-the-mark video to check out). Since you’re already here, why not try our primer? For it, we built a list of acts driving current interest in the genre and got a history of the music from Lukas Pizzola, whose folkpunkarchivist page on Instagram chronicles the genre’s key releases.

“My project has several aims,” Pizzola explained. “First, I want to stress to the community the importance of preserving our fragile physical history, particularly the self-released CD-R’s that so many important musicians in this scene used to distribute their music. Second, I want to build a functioning digital archive where the community will be able to access scans of original liner notes from rare releases, as well as links to safely access the corresponding music. Lastly, and most ambitiously, I want to gather the necessary interviews to write the definitive book on the folk punk community.”

Pizzola offered his take on the genre’s roots.

“Folk punk, as a community-based music scene, began to take shape at the turn of the century. Emphasizing ideology rather than a specific stagnant sound, the first concrete folk punk community in this sense was Bloomington, Indiana. This scene spread until there was representation stretching from New England down to Florida,” he said.

“The music that many of these bands played at the time was more closely aligned with lo-fi pop-punk and simple country tunes, but it was their willingness to experiment with unorthodox instrumentation that opened the door for what folk punk was to become. As early folk punk group This Bike is a Pipe Bomb has explained it: ‘We wanted to start a country band…the final result after all these years still isn’t the country band we had hoped for, but we don’t really mind.’” 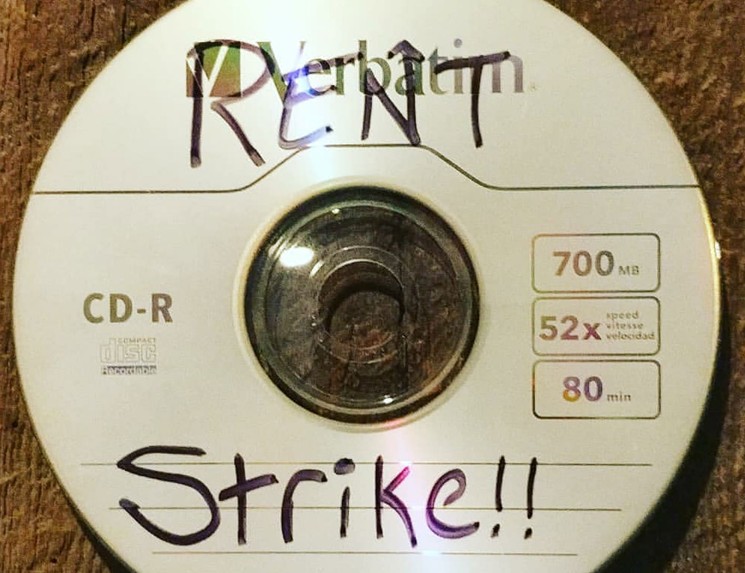 “From here, folk punk continued to proliferate in terms of theme,” Pizzola continued. “Projects like Erik Petersen’s Mischief Brew showed folk punk as a style concerned with identifying and fixing the faults in our systems (or perhaps blowing it up and starting over again). Other groups like early Pat ‘the Bunny’ Schneeweis project Johnny Hobo and the Freight Trains, as well as bands out west, like Phoenix’s AJJ, were taking an introspective look at the darkness built of our own anxieties while simultaneously asserting the overall goodness of humanity at large.

“Owing in large part to the community-based definition of the style, folk punk has continued to develop sonically over the years. Additionally, there has also been a transition in the curation of the music. In the past, a handful of small, but dedicated labels were the go-to for finding great folk punk music. Today, this is accomplished largely by live sessions recorded and distributed by the likes of A Fistful of Vinyl and Punk With a Camera.

“All of this results in a beautifully malleable music community, wherein artists are allowed to explore new sounds, and develop new ideologies, growing both as artists and as individuals, without the fear of losing community support,” Pizzola noted.

We traded notes on some of the acts that are integral to folk punk today. Because he’s a guest here, we allowed Pizzola the lion’s share of picks.


Apes of the State

Led by April ‘Apes’ Hartman, they have fostered a wonderful local scene in Lancaster, Pennsylvania, including related folk punk acts Local News Legend and Mary Wander. Apes’ lyrics pick up where some of the biggest names of the prior wave ended, a place a recovery. This seems to be the key difference with the new wave of folk punk: where a large contingent of people once gravitated to it as an echo chamber that glorified certain aspects of addiction, Apes uses music as a way to process the feelings that once lead to their more destructive habits. – L.P.

Danny Kiranos, the artist better known as Amigo the Devil, takes an unflinching look at the troubled side of humanity in his songs, which have bred the “murderfolk” subgenre, a dire place where fellow folk punk inhabitants like Harley Poe and Pauly Creep-O reside. Songs about murder and mayhem may not be for everyone, but the growing list of popular true crime podcasts and TV programs confirms there’s an audience eager to ponder the sinister. There’s plenty of evidence at Amigo the Devil shows, where fans sing along to Kiranos’ dark poetry. His brand has drawn some success for folk punk that’s edging towards mainstream: Amigo the Devil is a listed act on August’s Woodstock 50th anniversary event, right alongside Jay Z and Miley Cyrus. For his part, Amigo the Devil sees himself carrying on a tradition of murder ballads that stretches back to the Middle Ages. As he told Houston Press last year, “I think more than anything it’s just dark storytelling; it’s just not the pretty part of life.” -J.S.

This Portland group has put a more polished edge on the murderfolk/blackgrass styles of the flail-folk community. Bassist Scott Michaud brings scene pedigree with him as a former member of influential flail-folk band Profane Sass. While easily capable of the terrifying shrieks heard in "Song of the Siren," vocalist Libby Lux possesses the range to quickly switch over to the sorrowful croon present on "Ashes." Lyrically, this group leans in hard on themes of devil worship and bacchanalian frivolity to a degree that few groups could pull off without seeming goofy. Along with names like Harley Poe and Amigo The Devil, they are leading folk punk in a wonderfully spooky direction. - L.P.

Founded in 2008 by Whitney Flynn and Jesse Sendejas (full disclosure: the co-author’s son), DND has been a leading force in folk punk for the past half decade. Their style, known as "H-town thrash-grass," has helped usher in a vocally harsher wave of musicians into the scene. Their breakout 2013 release, Rogue Taxidermy, was a turning point that helped bolster the Houston DIY scene that renewed interest in folk punk out west, as the prior wave back east was already waning. Until someone new is able to step up and make the community react this strongly, DND are going to remain at the forefront of the scene. -L.P.

This spring at Chicago’s Moonrunner’s Music Festival – a two-day music fest which annually draws roots, country and punk acts to the Windy City - there was no clear “winner” among the dozens of acts which performed. But, Wisconsin folk punk veterans We the Heathens were clearly in contention. The band delivered an electrifying set by delivering an electric set. From unplugged to amped up, the Heathens offered new arrangements of old favorites like “33 Shots” and “Neurotic Decay” and the crowd roared above the din with approval. The band has long had an avid following, thanks to songs which confront the enemy (internal and external) and tangle listeners in acoustic strings. Hearing them through different circuitry, the songs tread into metal territory, which seems a natural progression for some of the Heathens' catalog. The crowd’s excitement over these sonic shifts suggest a new direction might be imminent, one which recalls Bob Dylan’s leap from acoustic folk to amplified rock nearly 60 years ago. - J.S.

“Try your best, be kind, don’t quit.” These are the already immortal words of Derek Zanetti, the man behind THGC. An ever-positive force in the folk punk community, THGC represents an increasing contingent of folk punk musicians preaching the importance of mental wellness. That being said, his music also makes very concrete points about his political views and the importance of actively living a life that is consistent with them. Currently signed to A-F records, the label run by Anti-Flag, THGC bucks the stereotype that folk punk needs to remain threadbare to hang on to its integrity. - L.P.

Michigan’s Rent Strike produced arguably the best folk punk album of last year, the sprawling epic titled IX. Lord of the Rings provided the framework for the record’s moving songs of wanderlust, addiction, loss and adventure, songs which create an odyssey all their own. IX may not be folk punk’s first concept album (or is it?) but it’s easily one of the most accomplished thanks to songwriter John Warmb’s meticulous crafting of the music. In full, it took him the better part of a decade to piece the work together. All the while, he churned out banjo-driven favorites like “Person I Am Not,” “Insert Town, Insert State,” and “The Perks of Being a Nihilist” and delivered passionate live sets of the music as a solo act. For IX, he assembled a full band to flesh out the compositions and the group has garnered lots of positive attention for folk punk, with adds to major festivals over the last year. - J.S.

A play on the phrase ‘tear jerk’, Crywank is the project of James Clayton. Disjointed from much of the folk punk community by the pesky Atlantic Ocean, Crywank is holding down the ideals of folk punk all over Europe. In explaining Crywank, James has professed that it was largely a response to the seeming inability of so many people, and particularly men, to speak sincerely about their emotions. While historically good at expressing such feelings, folk punk has tended do so in a manic, cathartic way. Crywank dives headfirst into the sincere depressive side of this, a trend I believe will continue to grow in this community. -L.P.
KEEP THE HOUSTON PRESS FREE... Since we started the Houston Press, it has been defined as the free, independent voice of Houston, and we'd like to keep it that way. With local media under siege, it's more important than ever for us to rally support behind funding our local journalism. You can help by participating in our "I Support" program, allowing us to keep offering readers access to our incisive coverage of local news, food and culture with no paywalls.
Make a one-time donation today for as little as $1.