Tobias Forge of Ghost Opens Up Ahead of Houston Date 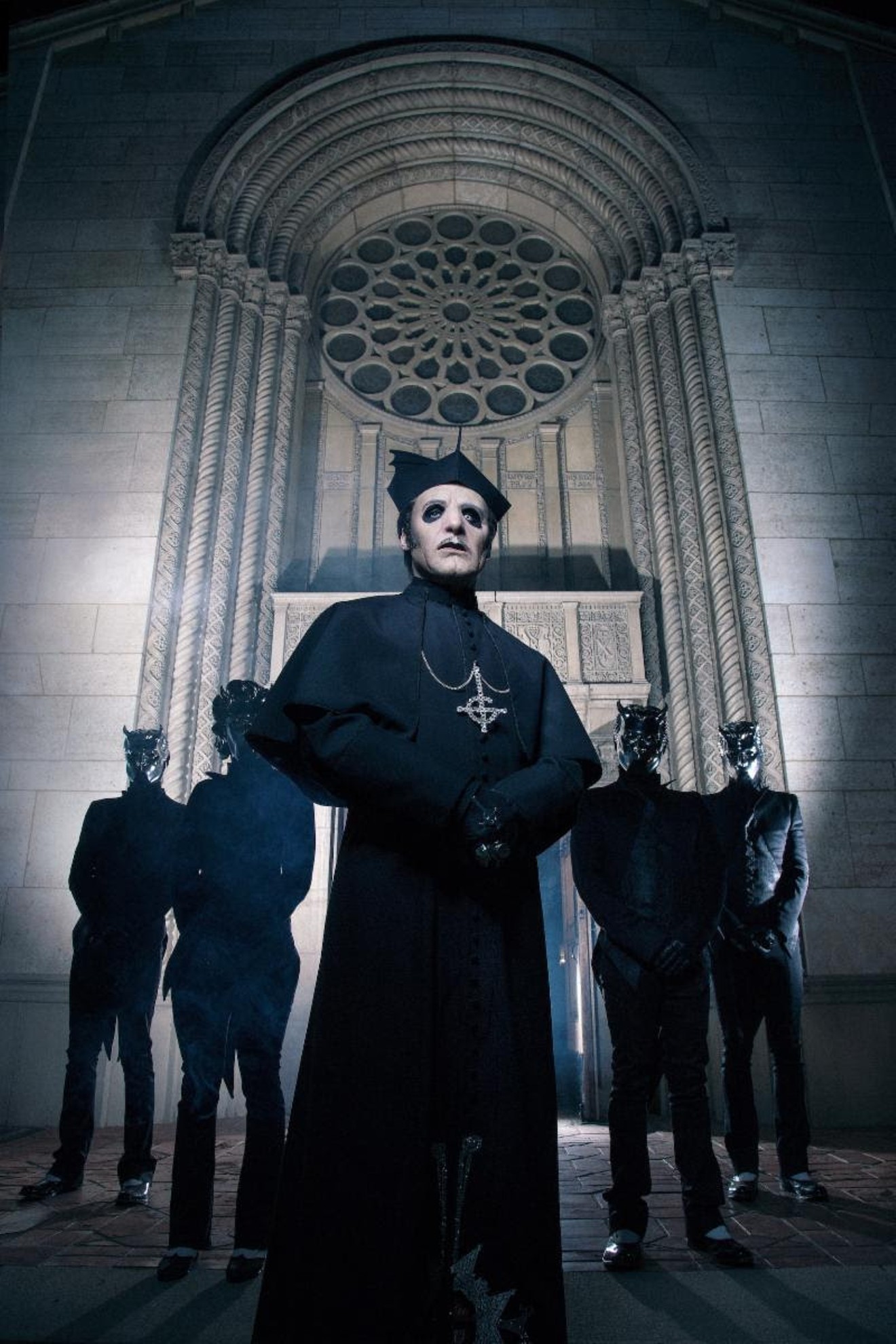 There aren't too many times in music when a secret can be kept, yet for more than a decade, the members of Swedish metal act Ghost have kept their identities secret while offering some of the most anthemic sounds to come from the genre in a long time. After blowing up on festival stages the world over, after winning multiple awards including a Grammy for the song "Cirice," the band has proved that their Satanic imagery is bigger than some might think.

Now, with a new album Prequelle ready to be performed live, and a new singer personae in Cardinal Copia, the band is ready to show Houston that you can't keep the mystery that is Ghost down. The Houston Press spoke to founder Tobias Forge about the band's concept, the new album, and what they have planned for us on May 8.

As an entity, most bands never achieve the kind of level of fandom that a band like Ghost has achieved. Since the band's inception, there's always been a level of mystery behind who the members are, and where they're from. While it's always been known that they're from Sweden, it wasn't until a lawsuit last year revealed Forge as the man behind the singer's mask. With Papa Emeritus I, II, and III, and now with Cardinal Copia, it had to be a tough secret to keep.

When asked if it was disheartening to have the anonymity lifted from the character, Forge responds, "well, actually the anonymity being lifted wasn't heartbreaking. After trying to get some of my best friends happy with something we could all enjoy, and to have it thrown back in my face; that was what was disheartening. It's not a new story, every band has something like this happen, and anyone who's lived long enough will tell you that very now and again, you have to do some "Spring cleaning."

When you dig into the band's past full of satanic imagery and their debut album Opus Eponymous, there's a lot of material to sift through. Getting started in 2006, the band was widely praised for their debut and their stunning and elaborate live sets. When asked how the concept of Ghost came to be, Forge responded: "Even as a kid, I was into theater and musicals. I always enjoyed theatrical entertainment. When you see a play like Hamlet, the show starts at 8 and ends at 10, and the show is the story. Whoever is in it, who played who, doesn't matter. When you go see a band like The Who, you'll see Pete Townshend and Roger Daltry. You won't see John Entwhistle and you won't see Keith Moon, but you'll see and hear 50 years of pop culture. You're stepping into rock history, and I wanted Ghost to be about the show and not the members in it. I wanted it to be more about the show, something you could get lost in."


The band was conceived as a solo project with hired guns on all of the records and the tours that followed, with Forge at the helm.  "It's always been a revolving door. the idea of a masked operation, and even the first lineup as a live band was just me and a friend from the get go. When you have people stepping into a finished project, they won't stick around for long. Even our first drummer wasn't into the band, saying 'I'm not really into this style of music, so keep looking for another drummer.' But, when you have those kind of attitudes, you don't expect people to be as involved as they would be with their own band. Some people think it's uncomfortable to be unseen, and we've never depended on one person or another, or a chemistry between the bassist and the guitarist to keep it going.

"I think it's important to understand, anyone who puts on an instrument to perform it live, will always want some form of recognition in doing so. You only do that with some for of exhibitionst intent, and as a kid, you want praise. But there's a limit to it. I've felt like I've gotten enough recognition over the years," Forge says.

The new album was recorded with Tom Daigety, whose work with Pixies and Royal Blood has received tons of accolades. While he had already worked with the band on the Popestar E.P. as well as the band's live album, as per Forge, working with him again was always the plan. "I got introduced to Tom in England and we hung out and got along so well, that we did the Popestar E.P. together. While it was fun working with him, it was a short lived project and we had discussed possibly working on a full length together. So, when this album was ready, he was the natural fit for it and we spent five months together making the new album."

Prequelle is due out June 1 on all platforms.
Artwork courtesy of BB Gun Press

As with any band the size that Ghost has become, there's plenty of fan interaction and theories about everything that they do. The band's new album Prequelle had been rumored to have nods toward the artwork for the debut album Bestial Devastation from Brazil's Sepultura. When asked about this, Forge gladly responded, "it does, yes. My first tattoo was of that cover, and the artist thought it would be fun to put in nods to the album, so we went with it and it was a fun idea."

With the new single "Rats," the video for the song has a fun and campy tone, with nods to early metal like that of King Diamond. When asked if this marked a new direction for the band in terms of being fun and less serious, Forge says: "Nah, I mean we've always kind of done that. The live show has always been a bit more comedic, or at least the live show for the past five years has. We haven't stepped off much from our past."

As for the live show, the band has never been short of mesmerizing in terms of elaborate set pieces, production value, and overall imagery. When asked if there will be more dancing incorporated from Cardinal Copia as in the video for "Rats," Forge replies, "there might not be as much dancing like in the "Rats" video, but the performance is typically the same. If you've seen us in the past, you'll notice that it's not a different thing. We'll be playing lots of new songs, with new decor, lighting, and gags. Oh, and technically, there's a new singer on this tour. Houston has always been a favorite place of ours to play, as Texas in general always has as well, and we should have fun at Revention Center."

No matter what the decor, Ghost should be impressive to catch in support of this new album. You can pre-order Prequelle in multiple formats from Loma Vista Recordings. With versions ranging from cassette to vinyl bundles, there are packages to make any fan of the band happy. You can catch Cardinal Copia and Ghost live and in person, when Ghost performs in Houston at Revention Music Center on May 8. The all ages show will be and evening with, and see the band performing for an extended amount of time. Doors at 8 p.m.; tickets $38.50 to $150, the latter being a VIP option with signed merchandise.