Good Old Days: The Best Houston Music of The Week

Buxton has a new album tunes for their Mucky Duck set. Photo courtesy of artist

Performances from Kesha and Macklemore, Robb Bank$, Cold Cave and more will be rolling through Houston this week while locals like Pearl Crush, Buxton, Tee Vee and more will all fill in the gaps.

Tonight you can begin at White Oak Music Hall with the indie folk of Philadelphia's Hop Along. Supporting their latest release Bark Your Head Off, Dog from this year, the sheer almost Tonya Donally notes of this release should get you out to catch them perform. The catchy and throwback rock of Bat Fangs featuring Betsy Wright of Ex-Hex will be on as openers and support for the all ages show. Doors at 7 p.m.; tickets $15.

Under The Volcano will get loose when the Appalachian folk of Houston's SOB swing by to perform. These guys make sounds like something from the turn of the last century on their album Venus and the Cat. There are no openers for the 21 & up show. Doors at 8 p.m.; TBD cover.

On Thursday you could swing by The Armadillo Palace to catch a performance from Houston's The Broken Spokes. Easily one of the most underrated country acts to call Houston home, their live shows are immense and their last album The Broken Spokes is old school country done correctly. There's no openers for the 21 & up show. Doors at 6:30 p.m.; Free.

If that's not your deal, you could go by MKT Bar to catch a solo set from Houston's John Egan who'll be including songs from last year's Magnolia City. There's no other performers for the all ages show. Start time at 7 p.m.; Free.

Buxton has a new album tunes for their Mucky Duck set.
Photo courtesy of artist
Over at Mucky Duck, the gents from Buxton will be performing new songs and songs from their last release Half A Native. The show is  21 & up. Doors at 7 p.m.; tickets $16 to $18.

White Oak Music will get down when the indie rock of Portland's Typhoon swing by to drop a set. Supporting this year's Offerings, this eight piece makes almost cinematic sounding music with catchy hooks. The noise rock of Portland's The Fourth Wall will be on as opener for the all ages show. Doors at 7 p.m.; tickets $16.

Spruce Goose will host the math rock sounds of El Paso's If We Were Turtles. With plenty of prog infused noodling, their last release No.1 is pretty solid. The emo tinged indie rock of Houston's Groundhog Day will be on as direct support while Love Out Loud will get the show started. Doors at 8 p.m.; tickets TBD. 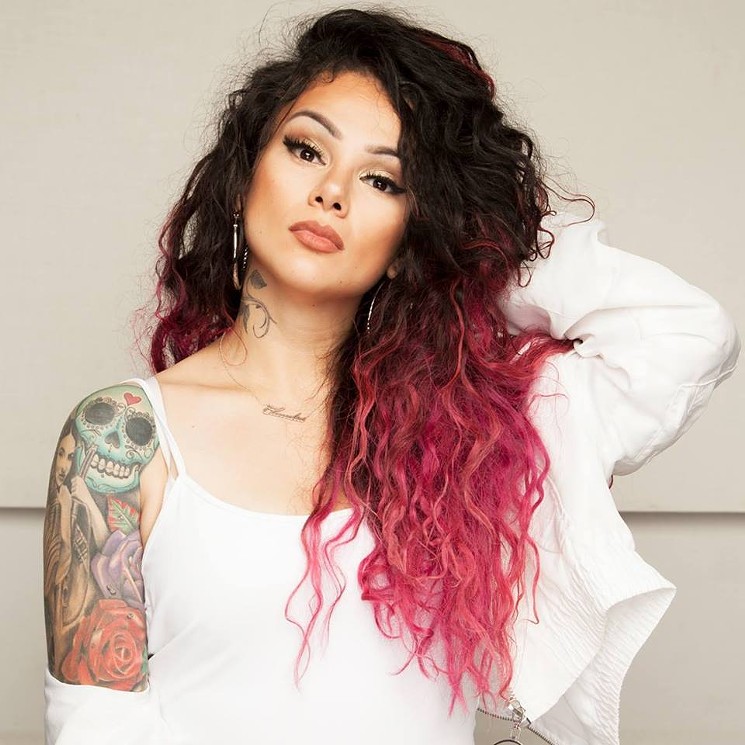 Over in the ballroom at Warehouse Live, the hip hop of California born and Texas resident rapper Snow Tha Product will be on full display with  her latest drop "Myself (fest. DRAM)" . The all ages show doesn't have word of openers, but that will probably change. Doors at 8 p.m.; tickets $22 to $25.

On Friday the dance pop of Houston's Camera Cult will headline a set over at Satellite Bar. With singles galore, these guys make catchy tunes for sure. Austin's BUHU will be on beforehand in celebration of their latest single release while the bedroom pop of Tee Vee will open the all ages show. Doors at 7 p.m.; tickets $10.

The Heights Theater will sound pretty splendid when Shinyribs stop by to headline the intimate space. Kevin Russell has come a long way since growing up in Beaumont, and with plenty of recordings under his belt, his last release I Got Your Medicine is pretty stellar. The splendid sounds of Houston's Vodi will get the all ages show started. Doors at 7 p.m.; tickets $20.

Cold Cave will get everyone dancing when they perform.
Photo courtesy of Heart Worm Press

Over at White Oak Music Hall, the dark wave of Cold Cave will be in town to drop a smoke filled set with their latest You & Me & Infinity. Black Marble will be on as direct support while the synth wave of Utah's Choir Boy will open the all ages show. Doors at 8 p.m.; tickets $15.

At Big Top you can get your sixties dance fix for the Shakin' All Over dance party. Get down to your favorite sixties jams alongside R&B hits and garage rock tunes at this 21 & up dance party. Doors at 9 p.m.; Free.

Saturday you could begin at Woodlands Pavilion for the duo set of Macklemore and Kesha. Both artists are Grammy nominated, both have catchy songs like "Good Old Days," and a duo tour and set should be nothing if not interesting. Wes Period will get the all ages show started. gates at 7 p.m.; tickets $30.50 to $139.

Over at The Secret Group, Arizona's Baseline will bring their emo based alt rock to town with their recently released album For the Sake of Clarity. The alt rock of Rival Coast will be on as direct support while the emo sounds of Houston's HIGHDIVE will go on prior. The post rock of Houston's Jonah The Runner will get the all ages show started. Doors at 7 p.m.; tickets $8 to $10.

Caroline Rose is a not to be missed performer on the rise.
Photo by Matt Hogan

White Oak Music Hall will have a set from producer/songwriter Caroline Rose. Dropping songs with comedic undertones on her latest release Loner, Rose has made herself known with energetic live sets and solid tunes from start to finish. The psych sounds of Portland's Cardioid will get the all ages show started. Doors at 8 p.m.; tickets $10.

Warehouse Live will get down with the hip hop of New York's Robb Bank$. Bank$ has made quite the name for himself; he's dropped plenty of sick tracks, and his latest "Transparencia" is a trip. Support sets from Diego Money, Lil Rarri, TheRealFlexGod and Keyan Christ will on go on prior for the all ages show. Doors at 8 p.m.; tickets $17 to $50.

So, So makes bedroom indie pop with ease.
Photo by Jimmy Bent

Insomnia Gallery is hosting the E.P. release for Houston's So, So.  Mixing jazz influence and bedroom indie pop, his single "Action Figures" is a great sign of what could be in store at this show. A support set from Astragal will also be on hand while the dream pop of Small Chair will go on prior. Boston's Little Foot will get the all ages show started. Doors at 8 p.m.; cover TBD.

Over at Spruce Goose, the E.P. release from Houston's Pearl Crush will take place. Coax Me Out mixes minimalist electronics with tropicalia and 808's with ease. The Regal People will be on as direct support while the electronic sounds of LYTA will go on beforehand. Britt will bring her soulful sounds on as well while DJ Come Bien will get the all ages show started. Doors at 8 p.m.; tickets $10.

Tomar & the FC's will bring their soulful sounds down from Austin over to the Continental Club. The five piece has tons of energy when they perform and their most recent release Heart Attack is soulful and enlightening. Bayou City Funk will get the 21 & up show started. Doors at 9 p.m.; tickets $12.

DJ Gracie Chavez brings fire to the decks at all her sets.
Photo by Jay Tovar

You can get down at Boondocks when Gracie Chavez stops by to drop your favorite ninety nines and 2000's jams at Hey Ya!. A set from DJ Ichikara Valdez will be on hand as well for the 21 & up event. Doors at 10 p.m.; Free.

Sunday you could make it over to Rudyard's for the pop punk of Houston's Action Frank. They'll have support sets from the punk of Oakland's The Lucky Eejits, the rockabilly infused punk of Dallas' From Parts Unknown, and Austin's Despero. Houston's Kemo For Emo will get the 21 & up show started. Doors at 8 p.m.; $5.

Tuesday the funky-tonk sounds of California's Sam Morrow will be over at White Oak Music Hall. Morrow has Texas twang, funk infused bass lines, and country lyricism all over his latest drop Concrete and Mud, and this all ages "evening with" set should introduce many to his eclectic sounds. Doors at 7 p.m.; tickets $10.

That's about it for this week. No matter what you decide to do, remember that drinking like an adult is what's best for everyone, and that a safe ride home is just an app away.
KEEP THE HOUSTON PRESS FREE... Since we started the Houston Press, it has been defined as the free, independent voice of Houston, and we'd like to keep it that way. With local media under siege, it's more important than ever for us to rally support behind funding our local journalism. You can help by participating in our "I Support" program, allowing us to keep offering readers access to our incisive coverage of local news, food and culture with no paywalls.
Make a one-time donation today for as little as $1.