Trial periods — they work for magazine subscriptions and services like Hulu, but can they also apply to music festivals? The organizers of one of Houston’s established, ongoing and free music gatherings is hoping music and art lovers will attend this weekend’s Groove & Vibe to try it before they buy it.

The upstart event will be held at Last Concert Café March 16-17 and “focuses on Houston music, but brings in more established ‘career talent’ to ensure the appeal of the event to a broad audience so that new people discover the event,” said Micah Jackson, founding partner of Visionary Noise, the festival’s producer.

Houston music aficionados know Visionary Noise has long presented For the Community, a multi-day music and arts festival that’s brought hundreds of music acts to local stages over the years. Some of the city’s most notable performers got their starts playing those stacked events, which have always been free to those who wish to attend. Jackson said Groove & Vibe is the logical progression of For the Community. The new event will more closely mirror a traditional music festival.

“The event is different than FTC in that this is solely a production of Visionary Noise and it has a slightly different business model,” Jackson noted. “Groove & Vibe’s inaugural installment is free to attend, (but) we ask for maximum direct invites to the Facebook event, shares, etcetera, because it is free. But this new event will evolve into a fair-priced event. There were a few key points that convinced us this is a good move.

“I see this as a moment of less competition and no less demand,” Jackson continued. “This climate, coupled with the evolution of FTC, were two of the strongest motivators. Also, it had been awhile since Visionary Noise had independently hosted a large event so I felt getting that in the mix again was overdue. Ultimately, a desire to further empower musicians and Visionary Noise is what motivates ticket sales in my mind. I think that by hosting legendary headliners, top-notch touring acts, coupled with so many locals, this will motivate sales, which ultimately benefits bands.” 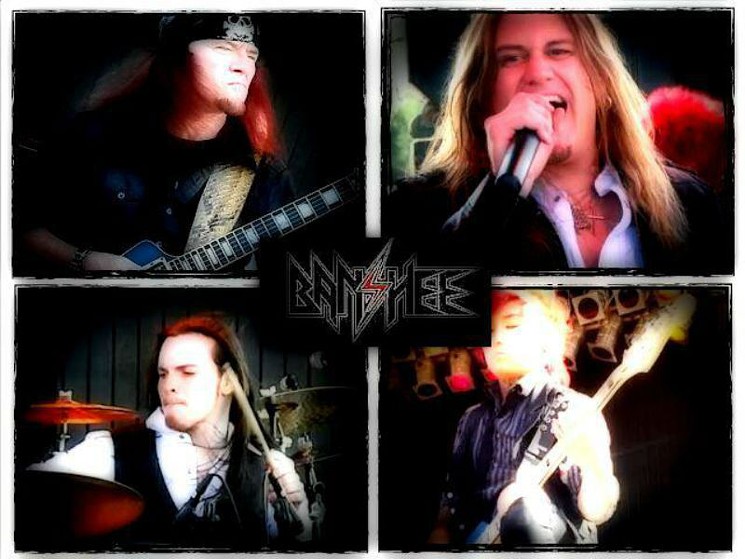 Jackson says Banshee is "epic power metal."
Photo courtesy of Visionary Noise
Jackson said the second installment of Groove & Vibe will feature ticket sales and presale tickets handled by the festival’s bands. He sees this as empowering to the acts, and believes having the acts move tickets will “make it worth their while.” They’ll be more involved in promoting the event and drawing larger crowds to its doors, he says.

Groove & Vibe’s early objectives run from having a strong turnout to ensuring audiences have fun. But, the biggest objective is providing an experience which encourages the masses to take art from the fest's confines back to their own communities.

“Human beings sustain and create culture whether they are aware of it or not. I mean that if you buy Shakespeare, you are ensuring he maintains a place in ‘literature;’ your newest clothes are ‘fashion;’ the painting you buy and put on display is ‘art;' another Led Zep record is ‘popular music,’” Jackson explained. “The closer you are to a lived experience of culture - a live music show, for example - you have not only more of a cultural experience, but what you connect with you are able to advance farther and more powerfully than, say, another Zep record. I want shirts, albums, art, taken out to new homes and lives from Groove & Vibe. Ultimately, we want to affect culture.”

That was also an initiative of For the Community, which Jackson says will return in the future, possibly as a multi-day festival with a camping component to it. He says staging FTC for so long created a network of bands, artists and merchants that gives Groove & Vibe a leg up on other first-time festivals. Jackson said he’s culled some special talent from that network for the weekend.

“For the headliners, Frank DiMino, Banshee and War Curse are all tremendous. Frank DiMino is the voice of the rock band Angel, who was dropping albums in 1975 after being signed by Kiss’s Gene Simmons to Casablanca. The man’s voice is amazing and the fact that his latest music is strong, as well as his performance, is an inspiration to many,” Jackson said. “Banshee is an American band from the Midwest, first formed in 1985. They had a couple of new members added to the lineup and their most recent release, Mindslave, is epic power metal with aspects that can speak to everyone. War Curse - this is an intense thrash band. The sound alone will make you thrash! War Curse have great songs, such as ‘Blue Line of Injustice,’ which I can hardly wait to see how the crowd reacts to.”

We ask Jackson for a few other notables launching Groove & Vibe and he rattles off a diverse list including Great Electric Quest, Ganesha, DiNOLA, Take Back Pluto, Londale, Smith DeVille, Devil Killing Moth’s Daniel Oviedo performing solo, Betterthanforgotten, Shrey Day and “Acid Pussy — have you heard? Well, I will tell you this much, you may recognize some of their members, but you won’t recognize any of their sounds because they are a new act going in a direction we are not used to hearing from their members which include Rachel Hansbro of The Western Civilization. Is that more than I am allowed?”

Jackson said Visionary Noise plans to record some of the fest’s performances for a live compilation and encourages fans to be on hand cheering loudly for their favorites.

"'Groove’ and ‘vibe’ are terms that transcend particular popular music genres. For example, most understand the verb form of ‘groove’ as performance, dancing to or enjoyment of rhythmic aspect of music; and, the ‘vibe’ as a feeling. When you vibe with something it is pleasant. Visionary Noise wanted a name with meaning and not just some off the cuff title, but we also wanted it to be simple, understandable, and transcend the particular cliques (and) genres to bring people together in the enjoyment and, most importantly, the renewed discovery of popular music.”