Guitarist John 5 Shreds with the Sinners 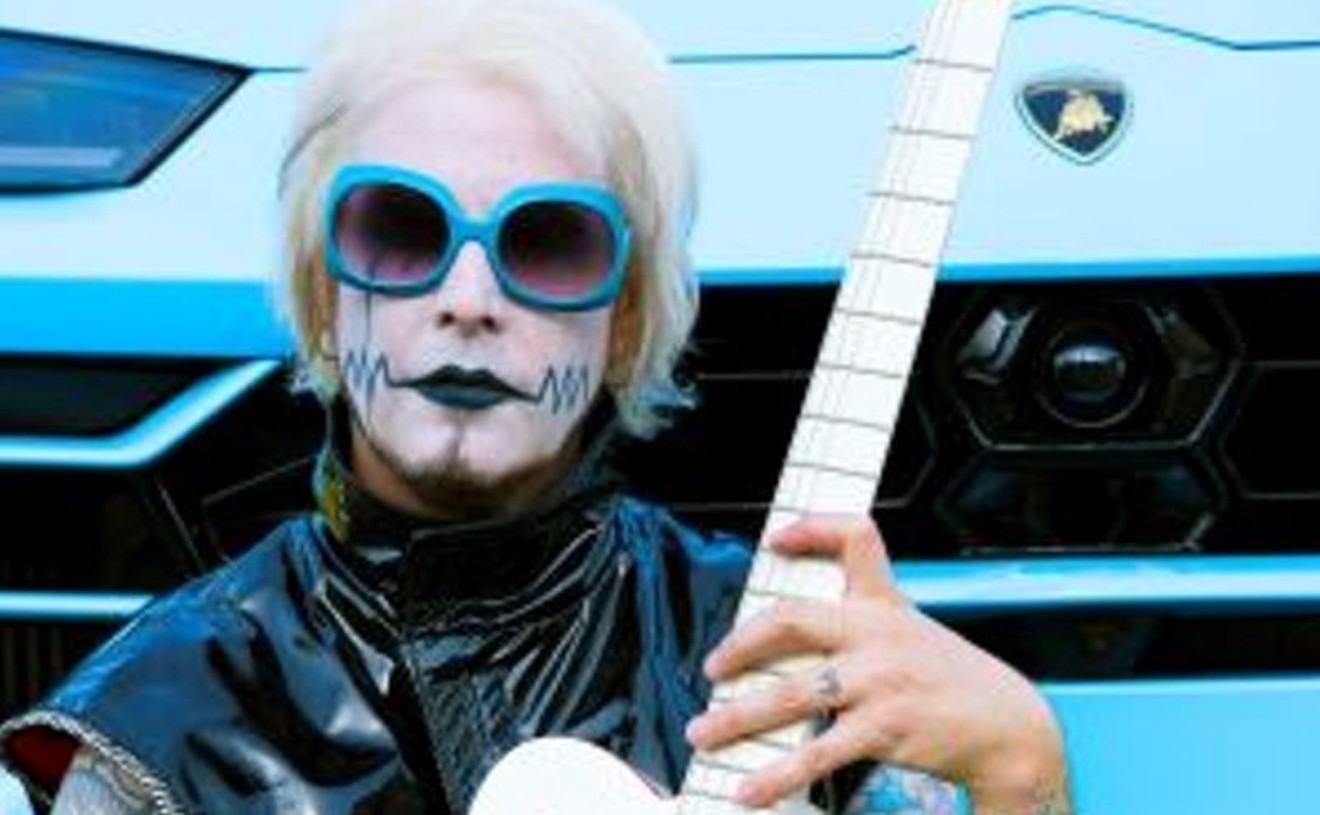 John 5 is best known for his collaborations with Marilyn Manson and Rob Zombie, but he has established a solid solo career with ten albums to his credit. Photo by Jeff Graham
Guitarist John 5 (he of the creepy horror-movie makeup) would seem to have all the bases covered. He is in steady demand as a guitarist-for-hire (Rob Zombie, Marilyn Manson, David Lee Roth) while maintaining a parallel solo career, with ten albums to his credit. And did we mention that he is a highly sought-after songwriter, providing tunes for Avril Lavigne, Ozzy Osbourne, and Lynyrd Skynyrd? Houstonians will have the opportunity to witness John 5’s unique brand of instrumental mayhem when he along with his band The Creatures perform at Warehouse Live on April 29 in support of his latest album, Sinner. 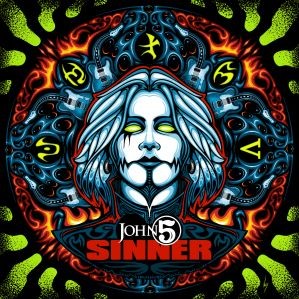 Album Cover
Since he is best known for his association with heavy metal bands, a casual observer might assume that the fiendish looking Mr. 5 would be a blood-drinking Neanderthal in platform boots who bangs groupies two at a time when he is not busy performing human sacrifices in tribute to his Dark Lord and Master. That supposition would be wrong.

Speaking via Zoom from his home in Los Angeles, John is, at least on the surface, resoundingly normal. Sure, he has a bunch of tats and a couple of earrings, but that, as they say, doesn’t make him a bad person. It may, at this point, be a requirement for getting a rock and roll union card.

John is personable and engaging, sitting in a sun-filled room and attired in an LA Clippers basketball jersey, aviator shades in place, ready to discuss the upcoming tour and the new album. “I think everybody can relate to the title [Sinner],” John says, “because it doesn’t matter who you are, there is a little sinner in everyone.”

John spent his formative years in Grosse Pointe, Michigan, an affluent suburb of Detroit. Did he grow up in a particularly religious environment? “We went to church on special occasions,” he says. “It was enjoyable. We would go to church for midnight Mass on Christmas Eve. It was fun, because you were up really late. You were supposed to be in bed. We weren’t really religious, we were just taught to be good people. It doesn’t matter what religion you are. If you’re a good person, that’s good enough for me.”
John knew early on that he wanted to be a musician, drawing inspiration from the television show “Hee Haw,” with Buck Owens and Roy Clark pickin’ and grinnin’. “I loved ‘Hee Haw.’ They had all these great musicians on there. And I was so little that I couldn’t believe that this was happening on an instrument. And that’s why I have such an appreciation for bluegrass and the crazy, crazy instrumentalists from that country era.”

This catholic view of music has always been part of John’s approach, as evinced on his new record. In addition to the expected slamming metal instrumentals, John slid in a couple of wild cards, the Hoagy Carmichael standard “Georgia on My Mind” and “How High the Moon,” which was recorded by Benny Goodman, Ella Fitzgerald, and the duo of Les Paul and May Ford. 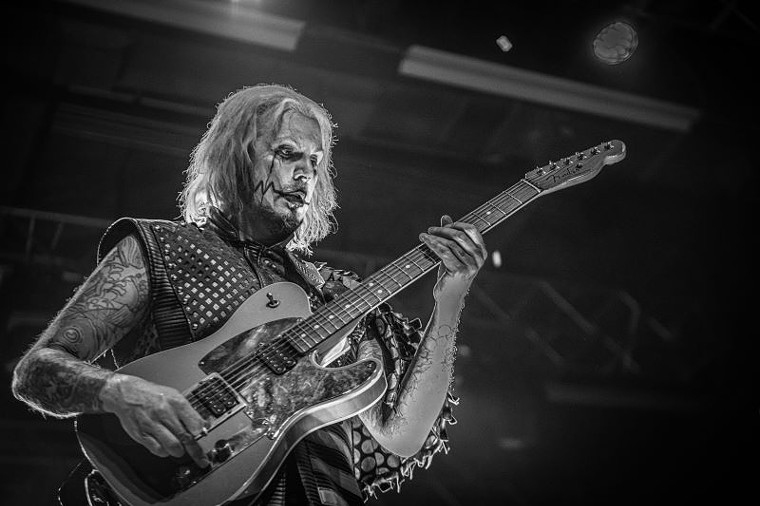 John 5 is highly regarded as a guitarist and as an individulal. “It’s half the battle being a good musician. The other half is that you have to be a good person."
Photo by Jeff Graham
Aside from prompting unexpected repertoire choices, spending time with the music of another period had an impact on John’s approach to the recording of Sinner. “We had so much time on our hands [during the pandemic], and I was listening to a lot of “40s Junction” on Sirius XM. It’s all music from the 1940s. I was like, this is so good, and it’s so insane, and it’s all live. And I thought that was fascinating. So I tried to make lemonade out of lemons. I wanted to perform the songs completely live. I didn’t want to do any overdubs. So when you hear this, you’re hearing a complete take, and that’s what’s cool. I’m not saying I got it on the first or second or third take, but what you’re hearing is a complete, live take. And that’s something I’m proud  of.”
And what do his fans think of what might appear to be off-the-wall song choices? “They actually react more than they do with the rock stuff! It’s from the heart, and they react crazier than they do for the heavy stuff. Because I think they are so used to hearing heavy stuff throughout their lives. Like every concert, every album. But then when you get something like 'How High the Moon,' they’re like, ‘What the hell?’ Even if they don’t like it, they will cheer, because it’s something that was shocking.”

By all accounts, John’s success in the music business has as much to do with his affable personality as his monster guitar chops. “It’s half the battle being a good musician. The other half is that you have to be a good person, because you’re working with all these different people,” John says.

“I take from experience,” he continues, “and I always look around to see what’s going on, because I’ve played with the best in the business. I always listen. And I always listen to both parties. So what I do is treat everybody — the road crew, the band — the same. I treat everybody with kindness and respect. I never talk down to anybody. Everybody is equal. And it’s worked so well. It’s so much easier to be a nice person.”

Speaking of those” best in the business” types, John graciously agrees to supply quick takes on some of his more notable musical associates.

k.d. lang: “I think k.d. taught me more than most artists that I’ve played with. It was an incredible experience.”

Marilyn Manson: “That was where I got my name. He gave me my name, John 5. It was New Year’s Eve, all the time. We had the biggest records, we had the biggest shows. It was insane, the success. And I could see it going up and up and up. It was incredible.”

Rob Zombie: “He was the one that changed my life more than anyone. With life, with music, with business. Really one of the smartest people I know.”

The Sinner tour will concentrate primarily on clubs, but John doesn’t see that as a comedown from playing stadiums. “I love playing these shows,” he says. “Now here’s why. I love people. And I really like to talk to fans. And with these shows, you’re really close. You can hear everything so well. I love playing arenas as well. Obviously, it’s so much fun. It’s crazy. But the fans are – it’s hard to throw a pick to the crowd because the fans are so far away. So either way. I enjoy the clubs, I love the arenas, so I literally have the best of both worlds.”
The interview comes to an abrupt end when John has to chase down Vlad, one of his Sphinx cats that has been roaming around during the conversation, occasionally peering into the camera. As soon as Vlad discovers an open door, it’s off to the races. “I have four hairless cats,” John says, hopping up. “and they’re all monsters.”

John 5 and The Creatures will perform at Warehouse Live, 813 Saint Emanuel, on Friday, April 29, on a bill with Fozzy, GFM, KrashKarma, and the Nocturnal Affair. Doors at 6 p.m. Tickets $10 and up. For more information, visit warehouselive.com.