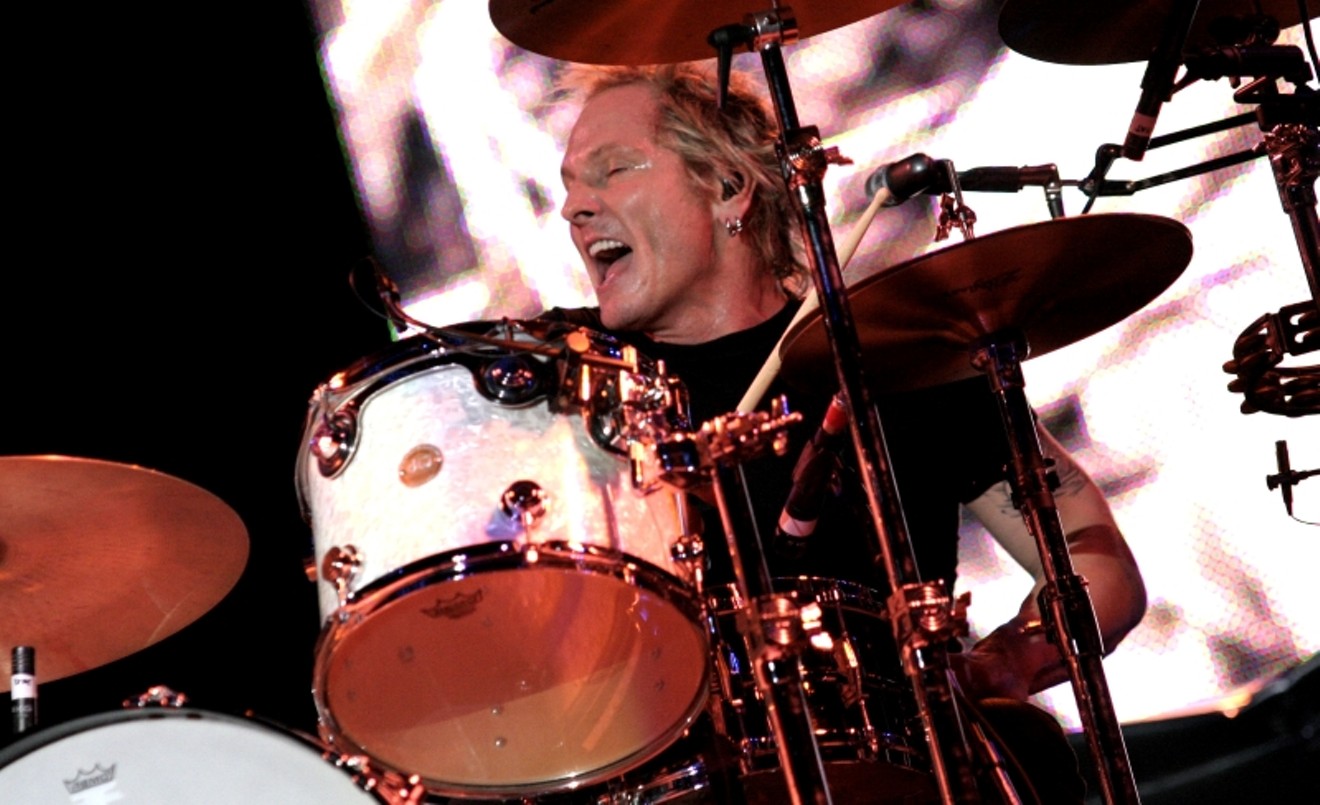 He lays it all out in the new autobiography (deep breath!) Double Talkin’ Jive: True Rock ‘n’ Roll Stories from the Drummer of Guns N’ Roses, The Cult, and Velvet Revolver (Rare Bird Books). There are anecdotes aplenty, with subjects ranging from music to drugs to juvenile delinquency to drugs to drums to drugs to groupies to drugs. Lots and lots of drugs.

The book’s lengthy title says something about Sorum’s position in the rock and roll hierarchy. His name may not ring a bell for casual fans, but his legacy is substantial. He drummed on several multi-platinum records, played on tours that sold out stadiums around the globe, and even (so he claims) came this close to having sex with Elizabeth Taylor. To Sorum’s amazement, he is still around to tell the tale.
By the time Sorum went on his first national tour (with The Cult) in 1989, he was already a veteran of the Los Angeles rock and roll scene. After a childhood filled with challenges (absent father, abusive stepfather, and a general lack of supervision), Sorum was only 19 years old when he migrated from the Valley to Hollywood, hanging out at notorious clubs like the Rainbow, the Starwood, and Madame Wong’s. He describes his style at the time: “I looked pretty cool in my red latex pants, Mom’s silk shirt, and white Capezio dance shoes. I was skinny and had big hair and a ring in one ear.” 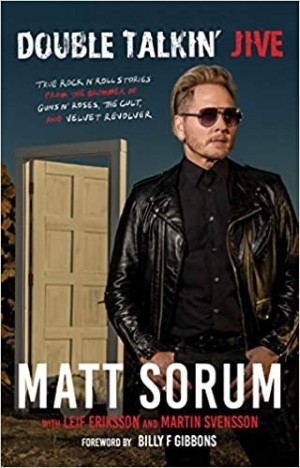 Sorum must have been a rather gregarious guy in addition to being a killer drummer, as he soon befriended a number of then-current and future heavyweights who would show up later in his musical travelogue: Ozzy Osbourne, Gene Simmons, Roger Taylor from Queen, Rob Halford from Judas Priest, and Nikki Sixx from Mötley Crüe (who gets double points for double umlauts). He also met Eddie Nash, who owned one of the clubs where Sorum played frequently. Nash was later thought to be the mastermind behind the Wonderland murders, though he was ultimately acquitted. The killings and the circumstances leading up to them inspired a portion of the film Boogie Nights (the creepy “Sister Christian” scene).

Word of Sorum’s drum chops began to circulate, and he was soon playing sessions for a variety of artists in a number of different styles. He fondly remembers backing legendary R&B singer Solomon Burke (“Everybody Needs Somebody to Love,” "Cry to Me"). Sorum sensed skepticism from the other musicians in the studio, most of whom were Black. Nevertheless, he soldiered on, drawing inspiration from his visits to blues and jazz clubs in New Orleans.

At the conclusion of the session, Burke sought out Sorum. “He was wearing a slick three-piece suit,” Sorum recalls, “and smelled like a combination of Hennessy cognac and Hai Karate cologne. ‘That was pretty funky for a White boy,’ he said with a smile. Solomon pulled a fat money clip from his inner pocket and teased out three hundred-dollar bills, which he then handed to me. ‘Pretty funky,’ he repeated, before slowly turning around and leaving the studio.”
In a move toward the major leagues, Sorum formed a new group around the piano-playing chanteuse Tori Amos. It was this band, Y Kant Tori Read, that set her off on a path to stardom, though Sorum was left behind when it came time to sign a record company contract. This would be the first of some major screwings-over that Sorum details in the book. After cutting Sorum out of the deal, Amos had the gall to ask him to play sessions on the band’s debut album when the new drummer couldn’t match the grooves that Sorum had laid down on the demos. Sorum negotiated a hefty fee for his appearance on the record, but still. To the young drummer’s credit, he had, at that point, already figured out, “Hey, that’s rock and roll.”

“I looked pretty cool in my red latex pants, Mom’s silk shirt, and white Capezio dance shoes. I was skinny and had big hair and a ring in one ear.”

After that disappointment, Sorum found himself at loose ends and without a steady paycheck. Like many musicians before and since, the young drummer would supplement his gigging income with a bit of drug dealing. First it was loose joints. Then ounces of weed.  Then pounds.  Then bales. Sorum had given up dealing after his first taste of success, but circumstances pushed him back into the life. That and the fact that "Bill," the lead singer in his new band, was really more of a big-time coke dealer than a half-assed vocalist. Before too long, Sorum was a bag man, taping kilos of cocaine to his body, transporting them to Hawaii via commercial airline flights, and then returning with a bunch of cash, usually somewhere north of $25,000.

This was, of course, during the pre-9/11 era, when security measures were rather perfunctory. Still, Sorum began to feel uneasy after making a bunch of these Hawaiian round trips. "'Bill,’ I said, cautiously peering out through the living room window, ‘I can’t do this anymore. I know they’re onto us.’ ‘Bah,’ he said, ‘you’re just paranoid.’ ‘I swear,’ I said, feeling my blood drumming in my temples and beads of sweat on my forehead. ‘I know they’re tailing me. I’ve been over there too many times.’” Overreacting? Maybe. But Sorum’s replacement on the next run was arrested and sentenced to 20 years in prison.
Terms like dysfunctional, codependent, enabling, and toxic are frequently thrown around, often indiscriminately and sometimes undeservedly, but in the case of Guns N’ Roses, every one of them applies, in spades. Sorum was asked to replace founding drummer Steven Adler in 1990, when it was determined that the latter’s substance abuse issues left him too unreliable for recording and touring. And when the guys in GNR say that you have a drug problem, well…

Sorum dove headfirst into a band as equally well-known for its outrageous behavior as its million-selling albums. This was the big time: chartered planes, four-star hotels, and lavish catering spreads backstage. Pretty much anything a young man might want, available at the snap of his fingers. Unfortunately for Sorum, the big time also meant egomania (in the form of bandmate Axl Rose), unpredictability (again, Rose), and selfishness (for the trifecta, Rose).

This is not to say that the other members of GNR were models of normality. The guitarists were quite a pair. Slash cut his solos in the control room facing a wall, due to his insecurities. Izzy Stradlin received a year’s probation after urinating in the aisle of an airplane, earning him the sobriquet “Whizzy.” Bassist Duff McKagan drank so much and so consistently that his pancreas eventually exploded.
Sorum is not exactly a name-dropper, but he does leave a substantial trail of well-known monikers that Hansel and Gretel could follow. Robin Williams (along with John Belushi and Angela Bowie)? Blow and Jack Daniels in LA. Billy Joel? Johnny Walker Black Label at Madison Square Garden. Ronnie Wood (Rolling Stones)? Cocaine in Tokyo. But not just any cocaine. According to Sorum, “I swear, it was the best coke I ever snorted. Ronnie Wood had the best cocaine, he and Steven Stills. They must have the same dealer.”

Despite the book's title, Sorum (aided by Leif Eriksson and Martin Svensson) presents his story in a straightforward and gracious style.  No double talking or jiving here.  He breezes through the years of excess with a matter-of-fact tone, never resorting to literary histrionics.  Sorum doesn't make excuses, and he owns up to any and all shortcomings.

These days, Sorum is living the clean life, but he is still active on the rock and roll front, playing with none other than Houston's own Billy Gibbons.  Sorum not only played drums, he served as co-producer and cowrote a majority of the songs on Gibbons' most recent album Hardware.   Of Sorum, the Rev. Willie G. says in the book's forward, "the unmistakable sound from the drum riser hits ya like a ton o' bricks."