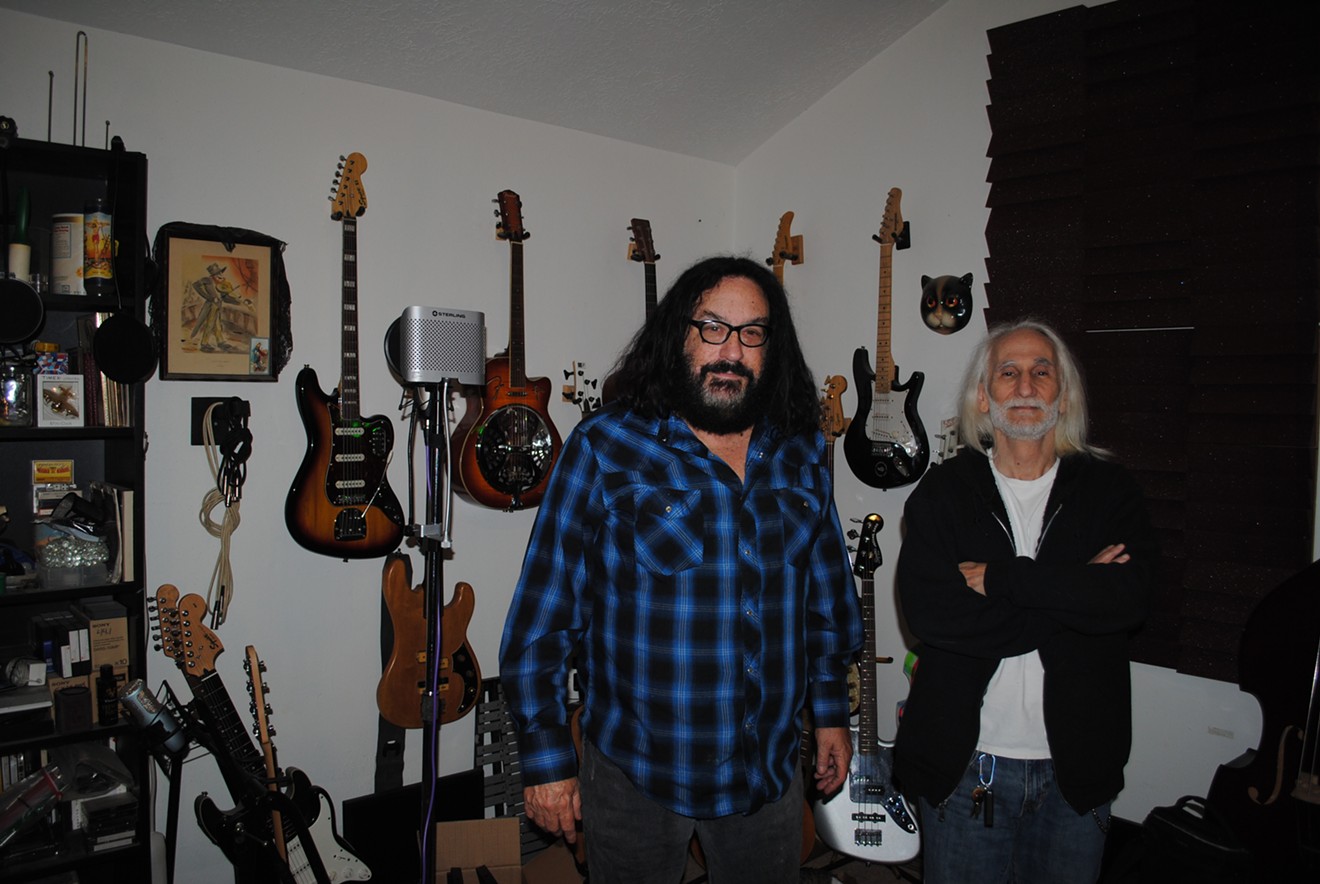 South By Due East co-founder Guy Schwartz, left; with Roger Tausz, right; at Bong Island Sound. Photo by David Rozycki
I met up with Guy Schwartz and Roger Tausz recently at Bong Island Sound recording studio in Missouri City to discuss new music coming out soon from their band, which is called appropriately enough, Guy Schwartz & the New Jack Hippies; Schwartz handles the vocals and guitar for the band with Tausz on bass. The two other hippies in the band, Chaz Nadege on piano/keyboards and John Chupin on drums were off, presumably involved in other hippie activities.

The band plans on releasing two new albums soon, the first, called Singer/Songwriter Night At The Green Oaks Tavern, will be released locally at the 17th Annual South By Due East Music Festival this weekend, March 30-31 at Dan Electro’s Guitar Bar, with a national release a few months later.

South By Due East or SBDE (not SXDE) is an event created by Marlo Blue and Guy Schwartz featuring a ton of local Houston bands from many different musical genres performing together in one spot that is absolutely free to attend; Schwartz, Blue and their volunteer crew record all of the performances at SBDE each year for a Houston Media Source public-access cable television show called South By Due East Television. You can watch past episodes on YouTube as well here.

As mentioned, SBDE is back at Dan Electro’s this weekend after being held at The Last Concert Café for the past several years.

“Our intention was always to move it around almost every year so we’d have the looks of different stages and different venues around town but we always get friendly and comfortable and stick around somewhere for a few years,” Schwartz says. “This year we had a lot of suggestions that we should go work with the new owners over at Dan Electro’s so we gave it a shot. They were wide open for it.”

Fiddle Witch & The Demons Of Doom: Cool name, cool band at SBDE this year.
Photo by Anthony Rathbun
“We have decided to lessen our load a bit this year by doing two days instead of three or four,” explains Schwartz. “We’re doing 4 p.m. to midnight approximately an eight-hour day instead of the ten to 12 hour days we were doing before and we’re going to record less artists and record them better and do better video. We’re going to have an event later in the year where we invite a few artists here to Bong Island Sound and shoot video of them recording here.”

Guy Schwartz & the New Jack Hippies will be performing both nights at SBDE; Guy & The Hippies invite other artists onto the stage with them so they can teach them a song from scratch right in front of the cameras and the recorders for a segment on the TV show called "Teach the Band a Song,” which Schwartz says is cited by fans as a favorite part of the festival each year.

Asked what kind of effect the cameras have on bands performing at SBDE, if any, Schwartz said:

“We hope that the cameras and the attention gets the bands excited and increases the greatness of their performances,” Schwartz says. “We know that there are some people that are shy, we even like to joke at times when we don’t bring the camera to the gig it will be a great performance because the cameras are not on.”

All jokes aside Schwartz and his crew have captured many great performances throughout the years; probably because they in fact do not turn the cameras off! Can’t jinx yourself if you record everything I guess.

Singer/Songwriter Night At The Green Oaks Tavern album being released at SBDE was recorded live at Bong Island Sound using the same arrangements of the songs which Guy & The Hippies perform at their residency at Green Oaks Tavern in Humble; a second album with which the band has already recorded rhythm tracks will be released later this year.

“Then we’ve got about another 12 albums in the can that we keep thinking about when we’re going to release them.” says Schwartz. “And they deserve a shot now that it’s a digital age and you can put them out there for anybody who might be interested.”

Guy Schwartz & the New Jack Hippies have been together just over 20 years; Schwartz and Tausz have played together for an amazing 44 years.

The duo Grifters & Shills is among this year's SBDE performers.
Photo by Grifters & Shills
“We started with a band we formed called The Zap Rhythm Band way back in the early 70s,” Schwartz says. “That band featured musical greats like Tony Braunagel who’s now one of the great producers of blues and plays in Taj Mahal & The Phantom Blues Band and Terry Wilson played with us, now plays with Teresa James who he married. Teresa sang on my first album and now she was nominated for a Grammy this year, all this time later. We also played with Billy Block who later moved out to California and invented the Americana genre.”

“Billy worked for The Gavin Report, a music magazine that specializes in charts like Billboard and he asked if he could make his own chart which he described as all the kinds of rootsy American music that The Band plays, talking about Levon Helm and Robbie Robertson and The Band,” Schwartz explains. “Then he had his first Americana radio program followed by the first Americana TV program on CMT. Throughout the years we got together and kept recording albums including the last one right before he passed away which we called The Return of the Zap Rhythm Band.”

Bong Island Sound has existed at its current location for about seven years, almost 20 years altogether; Schwartz says New Jack Hippies have recorded ten albums there and produced another ten with other artists.

“Roger producing and engineering other people who come in and hire his studio but get his production work as a free bonus are probably too many to count,” Schwartz says.

Tausz worked for Digital Services back in the '90s.

“It was the first big digital studio in Houston and also had a great recording truck, and that truck was used on The Talking Heads movie Stop Making Sense and they were real pros,” Schwartz explains. “And then they hired Roger and became even more pros.”

Honky-tonker Johnny Falstaff is one of the highlights of SBDE this year.
Photo by Alex Wagner
“I did a lot of the engineering and some bass playing on Scarface’s album The World Is Yours and I got a gold album from Scarface,” Tausz says. “Mike Dean did most of the work I basically just did some overdubs and vocal stuff on it and some bass on it. When I was working at Digital Services I worked on a lot of stuff that sold a lot of records.”

Tausz says he worked with another member of The Geto Boys, having mastered Willie D’s second album I'm Goin' Out Lika Soldier.

Schwartz has been in the Houston music scene for so long I had to ask him how he felt about Fitzgerald’s closing recently after many great years.

“My progressive rock band Relayer was the first band to play upstairs at Fitzgerald’s,” Schwartz says. “Maybe 1976, something like that. We played upstairs and there were those big windows all around the room and there were no longer windows in them they were just holes and the sound went right out into the neighborhood. The police came and we were closed down in about an hour. And that was the first night of bands playing upstairs at Fitzgerald’s. Been around a long time, they come and they go, Fitzgerald’s had a great run”

Guy Schwartz & the New Jack Hippies have had a pretty great run themselves and they are continuing on and not just living in the past; in addition to their upcoming performances at SBDE this weekend the band is now doing a residency every month at the aforementioned Green Oaks Tavern, the same at Emmit’s Place in south Houston, and on the east side at The Neon Moon Saloon they are hosting a Sunday jam once a month.

“We really do have a good time playing all kinds of American music that we’ve written and arranged on stage for years and if people want their music to be genre-free and tell some good stories while rocking, funking or doing whatever it needs to be doing we’re really good at that,” Schwartz says. “You want the short version? We’ve been together a long time and we’re really good at playing a lot of really good songs.”

Guy Schwartz & the New Jack Hippies perform both nights at SBDE.
Photo by Beth Cosme
Back to the subject of SBDE 2019, Schwartz says that Marlo Blue, who originally came up with the idea of the festival in the first place, is as involved as she’s ever been.

“Without Marlo doing some of the jobs that she does at the event we would never be able to keep track of all of this stuff and have it in the right kind of shape to grant the correct permissions and things like that,” Schwartz says. “She really sacrifices and gives of herself and stays strictly to the business of SBDE and the business of doing camerawork and doesn’t let herself get distracted. The post-production would be a lot more difficult without the work she does at the recording events.”

JC Rx, former soundman at Dan Electro’s was at Bong Island Sound while I was there talking to Guy and Roger and told me what SBDE means to him and why he helps out with the production.

“This is a chance for the Houston music community to share community, big C. It has to be a chosen thing in this city that is spread so wide with so many entertainment options for people to all come together and in one area, unlike Austin which is all together geographically, they’ve got community they can’t avoid it. Here it’s chosen and that’s part of the beauty and that’s why I’m involved.”

“My life is good right now,” Schwartz concludes. “I get to do SBDE for my community and I get to play my songs with my band on a regular basis. I’m the luckiest boy in the world.”

SBDE 2019 poster
Photo by Guy Schwartz
KEEP THE HOUSTON PRESS FREE... Since we started the Houston Press, it has been defined as the free, independent voice of Houston, and we'd like to keep it that way. With local media under siege, it's more important than ever for us to rally support behind funding our local journalism. You can help by participating in our "I Support" program, allowing us to keep offering readers access to our incisive coverage of local news, food and culture with no paywalls.
Make a one-time donation today for as little as $1.
David Rozycki
Contact: David Rozycki