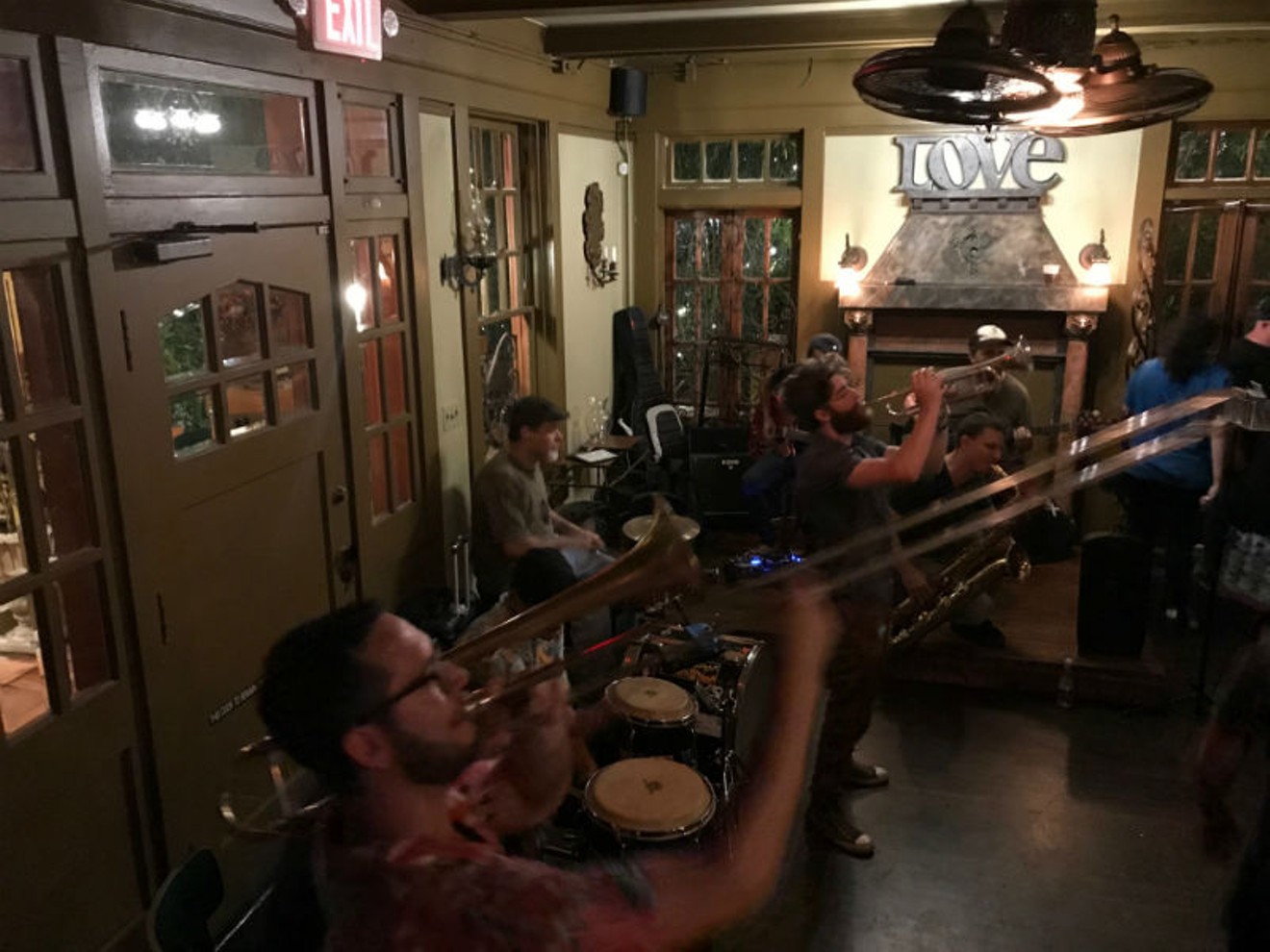 As noted previously this week, we took in 30 songs by 30 acts seen in Houston over the last 30 days (give or take a day). Presented in three parts, this is one person’s musical trek across Greater Houston and just a glimpse of where music is happening in the city.

Presented in no particular order, here is the closing set of songs that left an impression, including a few from as recent as last night to perhaps springboard everyone into this long weekend’s Houston music options. There’s a lot out there, go have fun finding it. 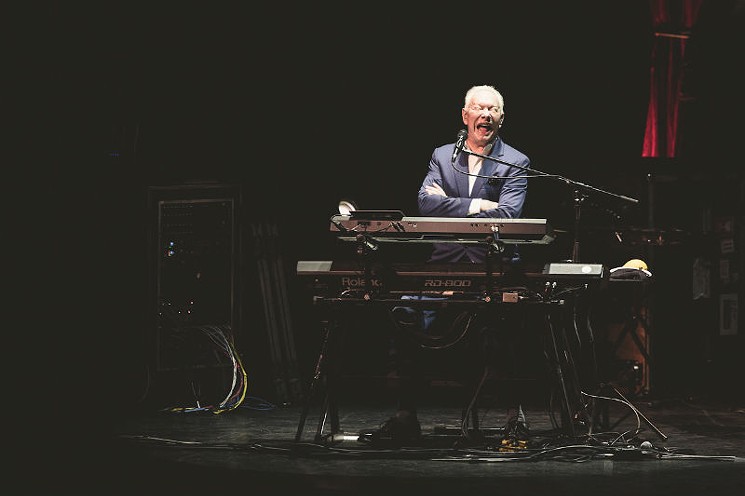 They traded their ripped jeans and safety pins for loafers and khakis years ago, but the punks, skunks, kooks and geeks who attended the recent Joe Jackson show in the very refined digs of the Wortham Center proved they were still beat crazy. They filled the hall’s Cullen Theater and mostly danced in their seats to the familiar pop-punk-jazz-New Wave tunes from Jackson’s 40-year career – until he and the band ripped into “I’m The Man.” That one was too much for one audience member, a blazer-clad woman who got up and thrashed to Jackson’s smirking take on commercialism run amok. 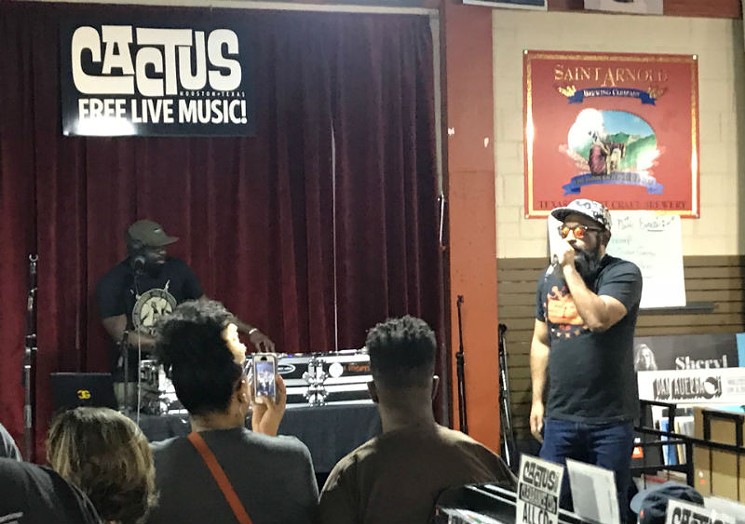 The in-store shows at Cactus Music are revelatory (not to mention a great deal – free Saint Arnold brew on most occasions and a vast breadth of talent always) and that was the case when we caught Mexstep there recently. Mextep is truncated for Mexican Stepgrandfather, also known as Marco Cervantes, a native Houstonian, member of the veteran hip-hop outfit Third Root and director of Mexican-American studies at University of Texas at San Antonio. His recent release, Resistir, is a moving 10-song collection which unabashedly confronts racism and fascism while simultaneously celebrating individualism and Latino culture. The Cactus set was rife with “fight the power” cuts from the album, but one track which really resonated was “Tejano Summer,” because of its celebratory vibe. Reminiscent of the old Wyclef Jean/Patti LaBelle track “Celebrate,” its Tejano-drenched tones and lines about old-schoolers like Jimmy Edwards were perfect reminders of idle days gone by when beer, barbecue and music were all we needed to “watch the afternoon turn into the evening.” When its fall and music pundits are writing about the songs of the summer, this will be our entry to the discussion. 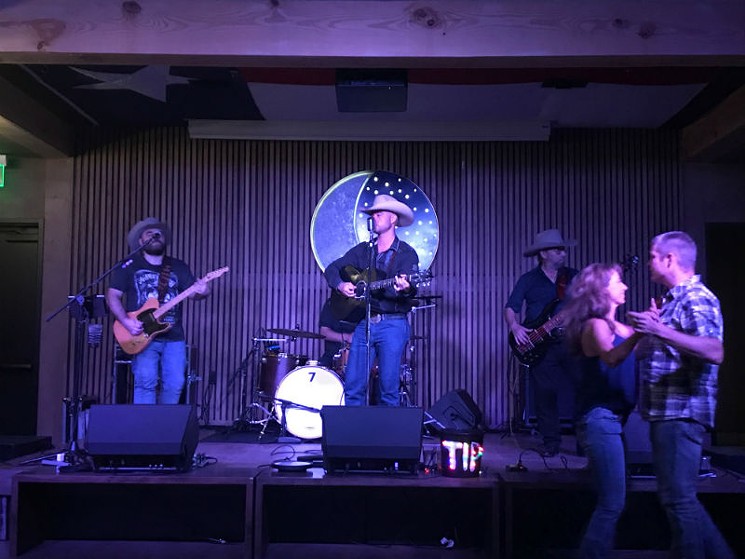 Jarrod Sterrett and the Hired Guns offered Cross Canadian Ragweed's "17" to those getting a head start on Independence Day celebrating last night. The song is heart-wrenching, not the sort of boot-scooter one might attach to a pre-game party, but the band delivered a fine and moving version to the Goodnight Charlie's crowd, so good it got them out of their seats and onto the dance floor. The band delved into more popular stuff like "Tennessee Whiskey" for the looky-loos who might have stumbled into the Montrose honky-tonk on a rare weeknight late night, but "17" is the song from the set that stuck with us.

When Houston guitar great Artie Villaseñor passed away this spring, his friends and peers gathered at Last Concert Café for an impromptu memorial which was built around the music he loved. Fellow Houston rock icon Lupe Olivarez brought Villaseñor's high-profile music friends to the stage all afternoon, people like fellow gunslinger Rob Saint and sax goddess Evelyn Rubio, who came to pay respects and play in celebration of a life devoted to music. Olivarez poignantly introduced this Beatles classic by reminding everyone to live in the moment to honor their fallen family member and friend.

This song was the show opener for The Monkey Tryouts at a recent Notsuoh stop and it’s the sort of song you’d love anyone visiting the city and strolling down Main Street to encounter. It rocked hard enough to pull passersby into Houston’s own little, odd version of CBGB. Once there, anyone who stayed on would have been treated to the band’s eclectic sounds, which included vocals in low octaves for songs with a very Modern English '80s vibe and tunes featuring an honest-to-gosh keytar. You don’t see many of those on Houston stages, not even at Notsuoh, a place known for all the inspired weirdness music can muster.

This one's an all-time favorite from one of Houston's all-time favorite country-blues rockers and it was delivered in one of his all-time favorite haunts at Under the Volcano before lots of friends and fans. All those favorable elements elevated a great song into a great moment. He didn't need the crowd's robust reaction to know he and the band had just served up a special version of a Stinson staple (we obliged anyhow), he just asked the bar for a cold Coors Light so he could bring the set home and kept rolling.

The first note on this song: this is probably not the exact title of the song. We asked one of the band members for its name during the set and this is what he told us, then shook his head doubtfully and simply said, “It’s on the last album.” That was good enough for us, since it gave us the opportunity to comb the back catalog of this veteran jazz-funk-ska-punk brass band. The acclaimed group recently opened for Bernie Sanders at Discovery Green, but this night was about local heroes, as they teamed with Los Skarnales for back-to-back sets by two of Houston’s best-loved bands. Song titles didn’t matter much to the faithful who crowded Avant Garden’s downstairs room to dance away their work week on a Friday night.

I admit, I'm too new a fan of Blaze X Black to know the set list, but I do know one thing: there aren't many acts that can hit the stage at four in the afternoon in the withering heat of summertime in Houston and draw people away from thirst-quenching beer taps and toward a makeshift, arid parking lot stage. That's what this dynamic hip-hop duo (plus its backing band and hype squad) did at Saint Arnold's recent 25 year anniversary event. Their booking was inspired because their energetic and high-vibe run set the bar very high for the acts which followed. I vow to learn the names of all the songs soon and plan to start my homework by taking in the act's next set on July 11 at House of Blues' Foundation Room.

When a band performs a song just right, it can transport a listener and we'll be damned if we didn't taste the briny ocean on our tongues when Celtic punks The Dead Rabbits sang this sea shanty at Wet Leprechaun Tavern recently. The venue is in Spring, miles away from the nearest whale, but the Rabbits' acapella take on the folk tune sent us out the pub's doors and into the night in search of our schooners for the float home.

If you had to pack an entire blues festival into a single night, Wednesday night at The Big Easy would fill that bill neatly. Houston's best and on-the-cusp players pack into the longtime Rice Village venue and do things mere mortals can only watch in awe. Last night, the room's featured performers included bassist/vocalist Dee Dee Bret, William Hollis on keys and Smoking Joe Leonard on guitar to name but a few. They were all incredible, but Jonn Del Toro Richardson's manic shredding on this War classic was inspired and a reminder of the rich blues tradition Houston enjoys.
KEEP THE HOUSTON PRESS FREE... Since we started the Houston Press, it has been defined as the free, independent voice of Houston, and we'd like to keep it that way. With local media under siege, it's more important than ever for us to rally support behind funding our local journalism. You can help by participating in our "I Support" program, allowing us to keep offering readers access to our incisive coverage of local news, food and culture with no paywalls.
Make a one-time donation today for as little as $1.