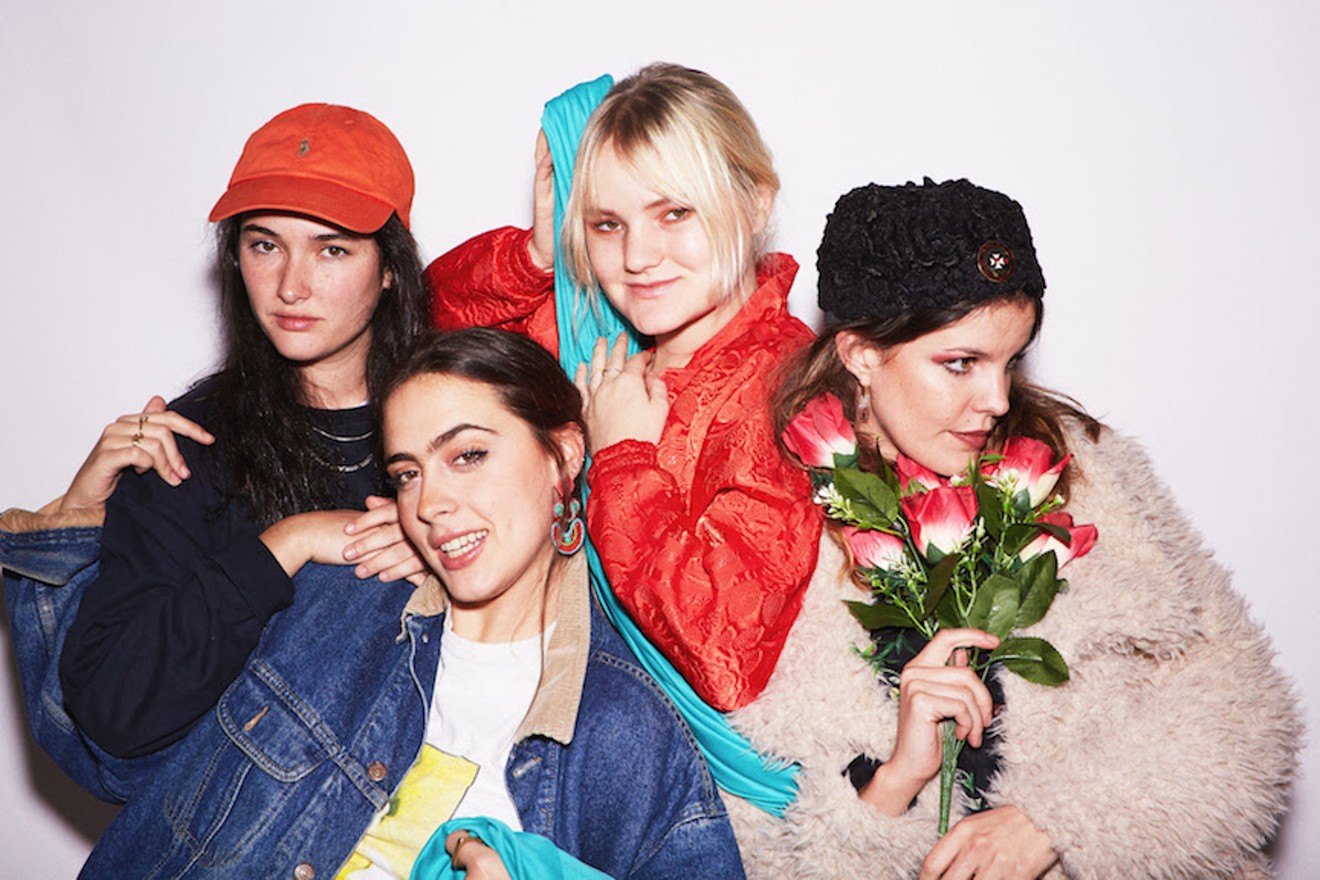 Madrid's Hinds are a band that everyone needs to hear sooner than later. Photo courtesy of Mom+Pop

A couple of years ago, I was handed an album with the preface, "Here's a band you need to check out."  The album was Leave Me Alone from Spain's Hinds, and needless to say, I was glad I had a copy to place on repeat for the next couple of months. After seeing the band perform later that year, I was pretty hooked, and was ready to start calling them the future of garage rock.

However, on their new album I Don't Run, out on April 6 from Mom+Pop Records, the Madrid-based four piece take their sound much farther away from the typical garage rock band, and leave you with an album that will blow you away and rock your soul from start to finish. The Houston Press was more than happy to chat with bassist and backing vocalist Ade Martin about the band's whirlwind of success, their new album, and what we can expect from them when they perform with Albert Hammond Jr. here on March 20.

It's kind of hard to believe that just seven years ago, this group was just a duo, and had a different name. Then, in 2014 after a name change and adding two new members, Hinds started to assert themselves as an act to keep an eye our for. Fast forward to 2016 when they released Leave Me Alone, and played on pretty much every festival stage that would host them.

Known for a grueling tour schedule that's taken the band across the globe, it made us wonder how the band keeps it all together without longing for home all of the time. "When you're on the road, you miss home and when you're home, you just want to tour. In the beginning, we really missed home more. After touring so much, that's not the case as often, though after this recent break we did miss touring," says the vocalist.

In recent months, the theme of feminism has really showed up in interviews with the four piece who are finding that feminism can show up in the least likely places. As per Martin, "Feminism doesn't really exist in Spain. I mean, it is getting better, but for so long it wasn't really a thing. In Spain, there are all of these older rock n' roll men who treat women in bands differently. If you play a gig, these male engineers feel like they need to explain to you how to use your amplifier, even if you explain that you've been doing this for a while, and that you know how to use your own amp. You ultimately get treated poorly. It's gotten better in the past two years. I never thought it would get better in Spain, but it is."


The band's new single from their upcoming album, "New For You," is about as close to their past sound as it gets on their latest release. While the band used garage rock undertones on their previous release, the new record not only proves that they know how to use their amplifiers better than many bands, but it reminds the listener of the early works of Vampire Weekend or The Strokes.

When asked if it was a conscious decision to re-invent their sound on the new album, Martin replies, "I think we knew what we wanted this time. The first time, we didn't have it all figured out. We made the record so quick, and we hadn't really toured. This time after touring so much, watching other bands, and learning how to record, we were more prepared. The first time we didn't realize that mixing was as important as it is, and the guy who produced the record also mixed it. This time we used a different producer and mixing engineer. Shawn Everett (Weezer, Alabama Shakes) mixed the record and he was so amazing. He showed us stuff we never would've thought of, like me especially using distortion on my bass. His ideas alone were great, and after so much touring we really knew what we wanted the record to sound like this time."

The new record's title I Don't Run is an intriguing title, and seemed like there was perhaps an interesting story behind it, something that Martin was happy to explain. "We wanted something similar to Leave Me Alone, and the vibe on the recording process with this record was two things really. The first was that while we love rock n' roll, after being out on the road, the drugs and all that surrounds rock n' roll doesn't really represent us. The second was that first record was done in a rush, and a label saying "you need to put out a record now." We hated that, so this time we took time just to write. We set out by stating, we need two months, and it might take longer, but we'll need at least that much time. We wanted to be at least 200 percent sure that everything came out like what we wanted."

I Don't Run will turn heads when it drops in early April.
Art courtesy of Mom+Pop

Catching Hinds play is a different story. Full of energy and passion, the four piece plays every show like it's their last with a precision that's rarely matched throughout the live music world. When a band has as much fury in a live setting, it made us wonder if it had always been that way, and if there were ever nights where it was difficult to keep that fire burning on stage. "Yes, it's always been that way for us, it comes naturally. If you had a beer with us, you'd realize that we're that way all of the time, and we're just as passionate in that setting as we are on stage. Getting to play live all over, we're so happy with getting to do it. There are times where the four of us can be tired, but when we see each other on stage, we feed off of one another and the energy is there no matter how tired we are," says Martin.

Knowing that the band are big fans of The Strokes, we were curious as to how surreal it is for them to be touring the states with their guitarist, Albert Hammond Jr. "Yes, it is. I mean, I've been a Strokes fan for a long time, and they are the biggest thing in my life. I've made all of my friends from listening to them, so it's crazy to get to do this tour with Albert."

Whether or not the band will nerd out over playing with Hammond on each night of the tour is yet to be seen. However, that shouldn't matter as Hinds is definitely on their way to blowing up this year. You can stream their music in all of the usual places, or pre-order I Don't Run either from the band here, or from Mom+Pop. You can catch the fuel throttled energy of Hinds when they perform at White Oak Music Hall downstairs as direct support for Albert Hammond Jr. The all ages show has doors at 7 p.m.; and tickets between $16 and $20.