Hootie's 'Cracked Rear View' Lives On, and with Good Reason 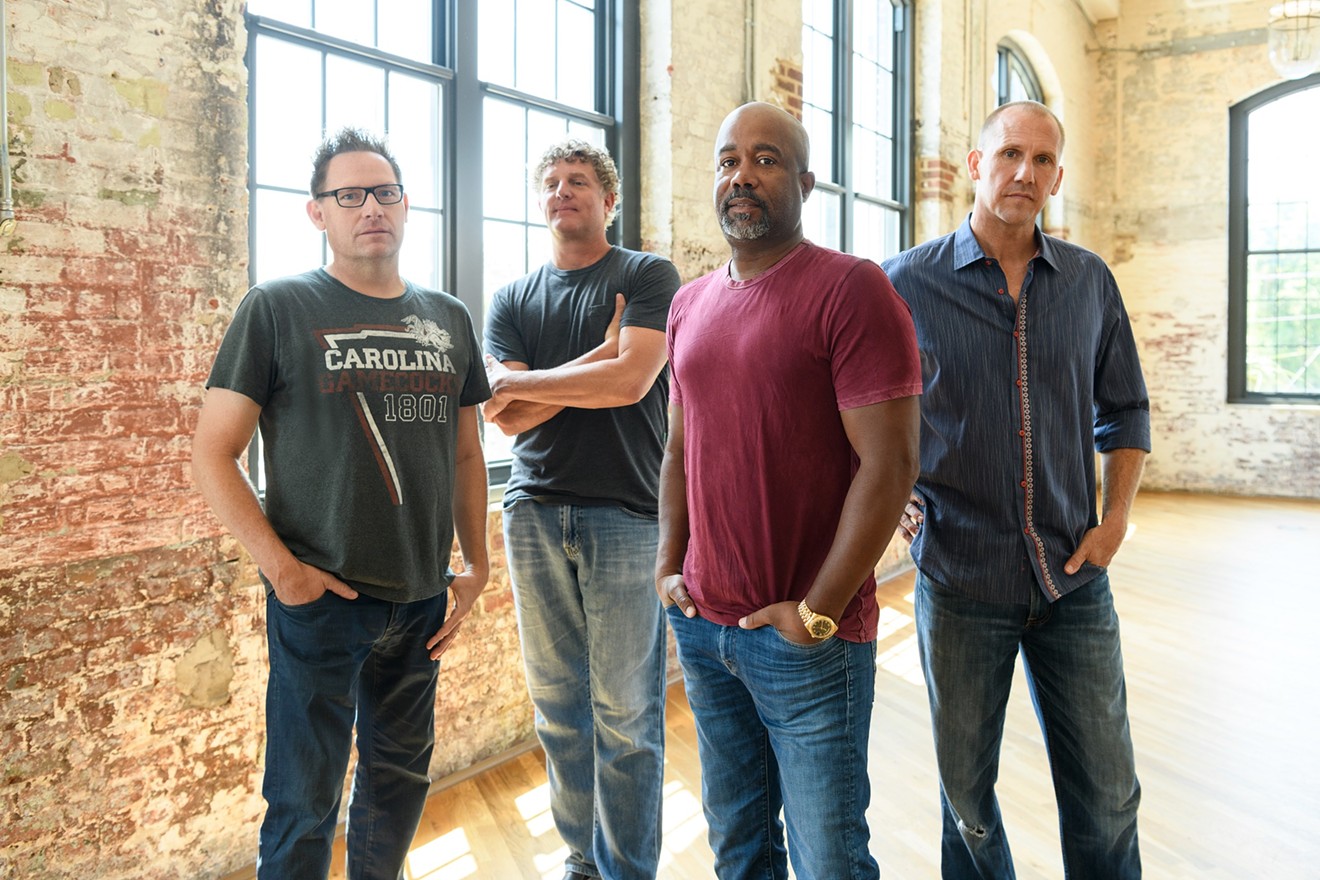 Hootie & The Blowfish plays Cynthia Woods Mitchell Pavilion in The Woodlands on June 14. The band is touring in support of the 25th anniversary of its multiplatinum debut, Cracked Rear View. Photo courtesy of Essential Broadcast Media
When we think of polarizing artists, we tend to think of artists who, you know, aimed to polarize. Or, at the very least, those who could safely be labeled controversial.

Drake is polarizing. Guns n’ Roses were and remain polarizing. In the early 2000s, Eminem was the very definition of polarizing. Metallica was, for a time, polarizing, particularly when they decided to undergo group therapy and film the whole thing. U2 changed their sound, forced an album into our iTunes accounts, and became polarizing in the process.

You get the point. Namely, the American musical landscape is littered with polarizing artists, many of whom used that to their critical and commercial advantage. Think about it - each of the five artists referenced above would fill up NRG Stadium if they announced a Houston date tomorrow (some already have). A portion of their relevance is grounded in their “love them or hate them” nature.

And then there’s Hootie & The Blowfish, who are playing Cynthia Woods Mitchell Pavilion in The Woodlands on Friday, June 14 as part of the 25th anniversary tour of their multiplatinum debut album, Cracked Rear View. The band is also expected to release its first new studio album in nearly 15 years, so expect some new material as well.

One certainly wouldn’t consider Hootie a controversial outfit. Frontman Darius Rucker is, by all accounts, a genuinely charming guy and talented musician, one who has carved out one hell of a solo country career in the aftermath of his mid-'90s pop-rock success. And while the other members of the band certainly haven’t achieved that status, these aren’t musicians who aim to offend.

And, yet, there is a good portion of the music-listening populace that hates itself some Hootie & The Blowfish. Need proof? Google “Hootie sucks.” I’ll wait…

These folks have any number of reasons for despising a band as inoffensive as Hootie. Their sound wasn’t original. Their lyrics caked in cheese. They helped kill grunge. Their name was stupid. On and on.

These Hootie naysayers are certainly entitled to their opinion, even if it’s the wrong one. Sure, Hootie wasn’t Nirvana, nor did Rucker and company aim nor pretend to be. Rather, they were simply four old friends who started a bar band, toiled in obscurity for NEARLY A DECADE(!!!), then found fame and fortune (20-million-plus copies sold, and counting) with a major label debut that hit at the exact right place in the exact right time.

For starters, Hootie didn’t kill grunge. By the time Cracked Rear View dropped in the summer of ’94, Kurt Cobain was dead and so was the movement he started. Their sound unoriginal? Name the last artist who came along and had zero influences of previous artists weaved into its sound. Cheesy lyrics? What part of “pop-rock” didn’t you understand? The name? Okay, the name is kinda stupid, and misinterpreted (Rucker is NOT Hootie), but whatever.

Point being, you don’t tour an album some 25 years after its release if that album didn’t resonate with people. And, make no mistake, Cracked Rear View did and still does resonate with a number of people, present company included.

It’s really everything a masterful pop-rock album should be. It’s concise - 11 tracks in fewer than 45 minutes. It leads (“Hannah Jane”) and ends (“Goodbye”) with the precise tracks it should. It has something to say (“Drowning,” “I’m Goin’ Home”). And sandwiched in between all that are three of the hottest pop-rock bangers of the mid-90s (“Hold My Hand,” “Let Her Cry,” “Only Wanna Be With You”).

As for the Hootie hate, what’s to hate? The Charleston, South Carolina natives weren’t put together in some A&R lab by a record label looking to cash in on the latest, hottest thing. The band was far from an overnight success, and instead, played dive bars, dingy clubs and frat houses in the late '80s and early '90s, while working odd jobs to supplement income. Plus, in an era when hardly anyone can agree on anything, Hootie has remained intact for 30 years.

As much will be evident when Hootie (and openers Barenaked Ladies) pack the Pavilion for what should be one of the city’s more enjoyable summer concert experiences. Will it be a life-changing experience? Unlikely, and it wasn’t intended to be.

Rather, Hootie will give its audiences a fun memory and a good time. And what’s so polarizing about that?

Hootie & the Blowfish, with Barenaked Ladies, is scheduled for Friday, June 14 at 7:30 p.m. at Cynthia Woods Mitchell Pavilion, 2005 Lake Robbins Drive, The Woodlands. For information, call 281-364-3010 or visit woodlandscenter.org. $29.50-$149.50, plus fees.
KEEP THE HOUSTON PRESS FREE... Since we started the Houston Press, it has been defined as the free, independent voice of Houston, and we'd like to keep it that way. With local media under siege, it's more important than ever for us to rally support behind funding our local journalism. You can help by participating in our "I Support" program, allowing us to keep offering readers access to our incisive coverage of local news, food and culture with no paywalls.
Make a one-time donation today for as little as $1.