Pub Fiction (and neighboring Irish Cowboy) easily rank among the best bars in the city to watch the NCAA basketball tournament. Photo by Yuri Pena
You watched the selection show. You studied all the ins and outs. You ignored Dick Vitale. Then, you filled out a bracket. Odds are, by now, that very same bracket has gone kaput, thanks to top seeds like Xavier and Virginia bowing out early, not to mention Cinderella stories like Loyola-Chicago and Nevada advancing to the Sweet 16.

And, hell, even if your bracket remains somewhat upright after the first weekend of the NCAA basketball tournament, the Sweet 16/Elite 8 rounds provide yet another weekend of revelry and merriment, preferably on any number of Houston area patios.

The Final Four will be decided by weekend’s end; here are the best bars in Houston to enjoy the madness.

Beer Market Co. Midtown
Photo courtesy of Beer Market Co. Midtown
BEER MARKET CO. MIDTOWN
Michigan plays Texas A&M on Thursday night, and considering College Station lies just down the road, it’s fair to label the Aggies heavy fan favorites to reach the round of eight. However, for those looking to cheer on the Wolverines, Beer Market Co. Midtown is the place to be. Get down on bar bites like fried pickles, wings and nachos while sipping on any number of area and national craft beers. The Wolverines already took down Houston; this is the place to see them in their quest to knock off another Texas-based outfit. (3304 Milam, beermarketco.com/midtown)

Christian's Tailgate
Photo by Clint Hale
CHRISTIAN’S TAILGATE DOWNTOWN
You can’t really go wrong with any of the area Christian’s establishments, but the downtown one benefits from having a large outdoor projector screen. And now that the third round is upon us, meaning fewer games being played simultaneously, Christian’s downtown makes for a fine place to watch Texas A&M or Texas Tech in their question for a Final Four berth. (1012 Congress, christianstailgate.com/downtown)

Clutch Bar Houston
Photo by Clint Hale
CLUTCH BAR
Clutch Bar is the place for those looking to mix their basketball watching with a little upscale partying. And considering this weekend’s games run between Thursday night and Sunday afternoon – ya know, peak party days – Clutch makes for a great spot to watch the NCAA action. The craft-only taps are cold, the food is good, and there is literally a TV at every turn. Not to mention, once the games are over, there are plenty of nearby bars in which to keep the party rolling well into the evening. (5334 Washington, clutch-bar.com)

Coaches Pub Midtown
Photo by Houston Press
COACHES PUB MIDTOWN
Kansas ranks among the most storied programs in college basketball history, so of course, there are local watch parties for yet another Jayhawks tourney run. For those who know what “Rock Chalk Jayhawk” means, you’re in luck, as Coaches Pub in Midtown host KU watch parties. The Jayhawks take on Clemson Friday night and are favored to reach the round of 8. Put on your blue, grab a cold one and see how many Big 12 teams can reach the next round. (2204 Louisiana, coachespubmidtown.com) 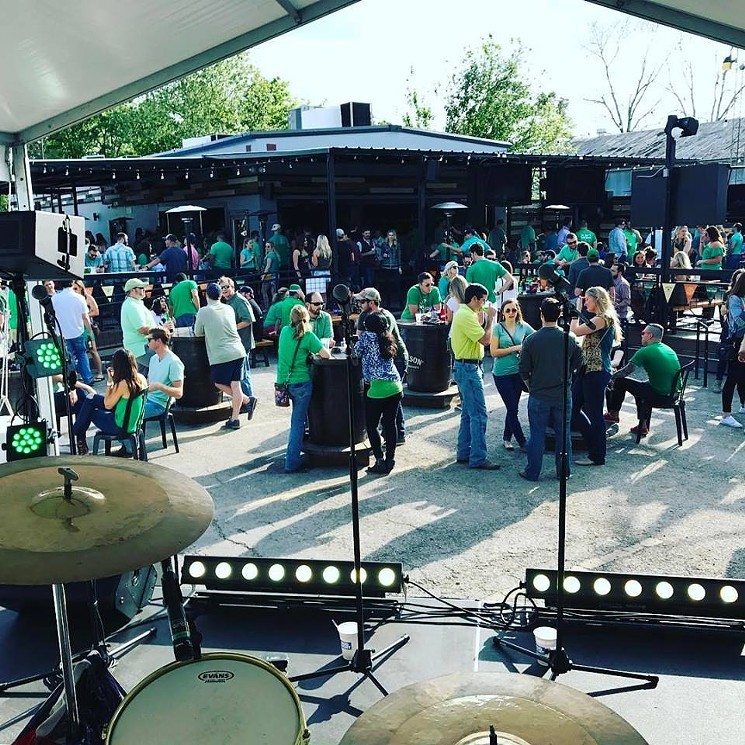 McIntyre's
Photo courtesy of McIntyre's
McINTYRE’S
Yes, McIntyre’s pops up on any number of the Press’ “best of” area bar lists, and with good reason. Not only is it arguably the best patio and sports bar in town, but McIntyre’s also features a little something for everyone. Social types can enjoy the swings, and sports fans can enjoy television sets at every turn (plus, the main game on the bar’s speaker system). Plus, with Spring – and, thus – patio season upon us, McIntyre’s spacious patio ranks among the finest places in the city to enjoy the last good run of weather before the Texas summer bears down on us all. (1230 W. 20th, mcintyreshouston.com)

Porch Swing Pub
Photo by Clint Hale
PORCH SWING PUB
With TVs inside and out, not to mention crawfish on the daily, Porch Swing easily ranks among the best neighborhood bars in the city. However, with the national championship game scheduled for a Monday night (April 2), Porch Swing has the added benefit of serving up 35-cent wings from 5 p.m. – close. Pair those wings with a large pretzel or mini corn dogs, and you’re in business. (69 Heights, porchswingpub.com)

Pub Fiction
Photo courtesy of Pub Fiction
PUB FICTION
Aggies galore will be out and about on Thursday night, and the energy is high, coming off A&M’s convincing victory over North Carolina in the round of 32. And while A&M alumni and fans will be spread throughout the city on Thursday night when the Aggies face Michigan, it’s a safe bet a higher population than most will be found at Pub Fiction, and even neighboring Irish Cowboy. The TVs are plentiful, the drinks are strong, and dogs are welcome on the patio. (2303 Smith, pubfiction.com)