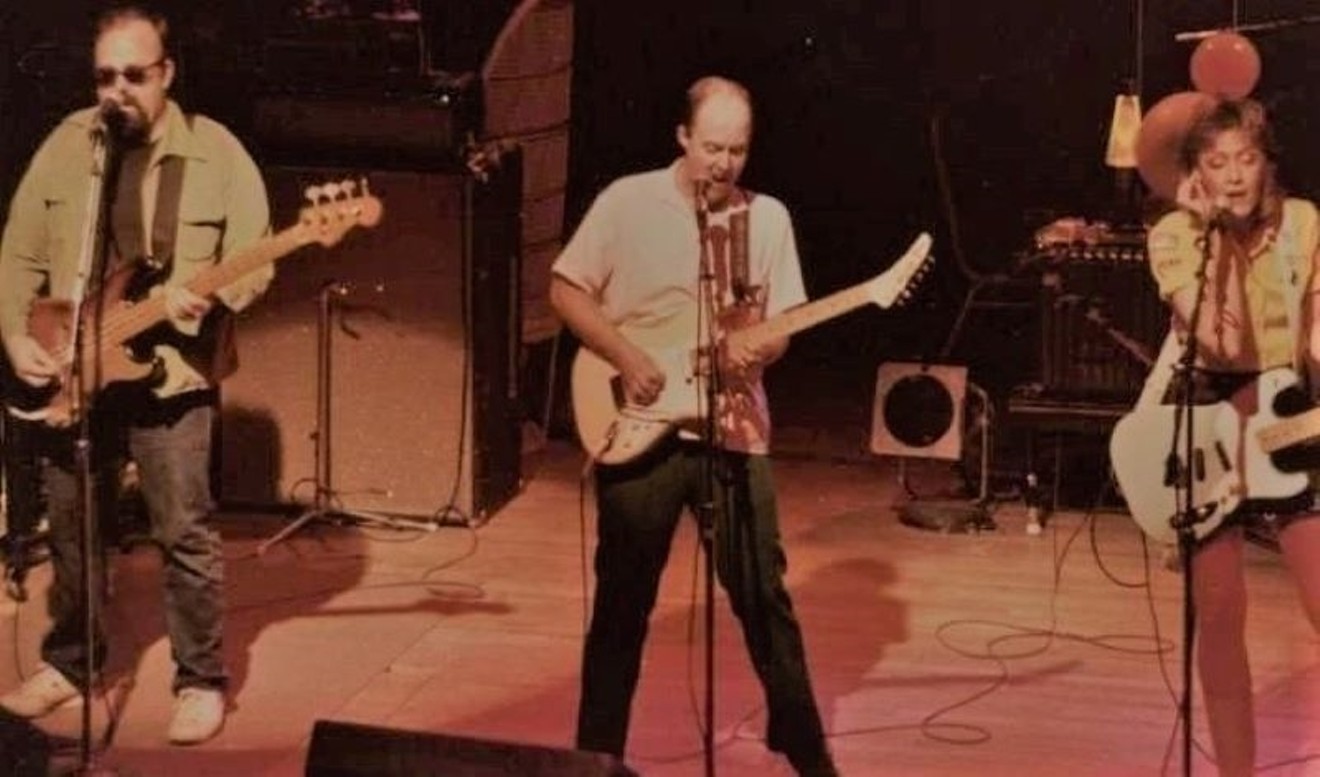 Jimmy Raycraft on stage with the Dishes, a band that kept folks on the dance floor during the '80s. Photo courtesy of Beans Barton
Jimmy Raycraft was unique, in the strictest sense of the term. Sui generis. If you caught his act, you would never forget him.

Raycraft, a phenomenally talented guitar player possessed of a surreal sense of humor and an obsession with mayonnaise, passed away on February 8 after a lengthy illness. When the news traveled through the Houston music community, tributes began appearing on social media. Herschel Berry, founder of the Natives, spoke for many when he said on Facebook, “This one just kicked me in the heart. I am beyond sad.” 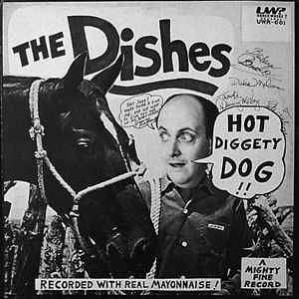 Jimmy Raycraft, featured on the cover of the Dishes' Hot Diggety Dog, recorded, as indicated, with real mayonnaise.
Album cover

Beans Barton of Beans Barton and the Bi-Peds, a theatrical rock and roll band Raycraft played with for ten years, said in a phone interview last week, “He was savant-like. He had perfect pitch. You could play a song once, and he would know it. He could play it better than anyone else. He was pristine, and he was magical.”

Barton realized quickly that Raycraft was a bit, well, different. “When he first joined the band, he told me, ‘I don’t like to rehearse. I just like to hearse.’” Eventually, Raycraft ended up doing double duty with the Bi-Peds, playing guitar and bass with that band while also serving as its opening act. “I let him use the Bi-Peds and front it. He called them the Roaring Calhouns,” Barton recalled. “It was a wonderful opening act, because we didn’t have to move any equipment between sets, it was all just the same stuff. He was such a wonderful front man. He was a great guy. Everybody loved him, that’s for sure.”

A native Houstonian who grew up in Spring Branch, Raycraft took to the guitar as a youngster and was a presence on the Houston music scene for decades, starting during the heady post-Beatles-on-Ed-Sullivan era. Raycraft could play it straight, but he is best remembered for his tenure in the Dishes, a band he founded during the ‘80s. The Dishes’ sound could be best described as new wave, driven by Barbara Donoho’s Farfisa electric organ. Snatches of Jimi Hendrix and the Beatles were also part of the proceedings, along with whatever else might cross Raycraft's mind.

A typical (if there were such a thing) Dishes show was enough to induce musical whiplash, as the band deftly segued from “Summertime Blues” to “The Race is On” to “Wooly Bully” to “The Baby Elephant Walk,” all tied together with Raycraft’s stream of consciousness musings between – and sometimes during - songs. A frequent topic was “mayonnaise pizza.” While the Dishes leaned heavily on their idiosyncratic covers, original tunes were also part of the mix, among them “The Night I Dreamed I Was Elvis.” But, to be clear, in the midst of frivolity, the musicianship was of the highest level. The Dishes were, as they say, tighter than a duck’s ass. For proof, check out this live recording from a gig at Fitzgerald’s in 1987:
No one knew Raycraft better than Danny McVey, a sound engineer who worked with both the Dishes and Beans Barton. Speaking by phone from Corpus Christi, where he had briefly gone to clear his head after Raycraft’s passing, McVey said, “He was my best friend. When anyone would talk about him, if I could say it out of his earshot, I would say, ‘I don’t know if you know it, but you’re looking at one of the best guitar players there has ever been in the city of Houston, and possibly even the state.’ The guy was incredible. Not to mention an incredible front man. An incredible comedian in his own right. And absolutely the sweetest, most loving person I’ve ever known.” 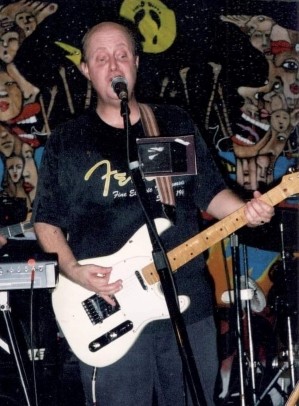 Jimmy Raycraft played for a decade with theatrical rock and roll band Beans Barton and the Bi-Peds.
Photo courtesy of Beans Barton
The two men became fast friends when they worked with Houston musician Michael Marcoulier. At some point, McVey and Raycraft discovered an unlikely coincidence. “Turned out we were both born on the same day, same year, same city. At that point, we just knew we were probably going to be friends forever.”

McVey fondly remembers their times on the road together. “Jimmy and I played a gig in Austin years ago, at Steamboat Springs. It was a show that we had done with Shake Russell, Dana Cooper, and John Vandiver, and Michael Marcoulier was the opener. After our set, Jimmy and I had a little acid, so we enjoyed that, and then Jimmy went back and finished the last set with everybody. And after that, we decided to go to Jack in the Box to get some dinner, as you do at 2 in the morning.

“And then we went to see our friend, who was a waitress at Corky’s in Houston and now was a waitress at Steamboat and always put us up when we were in Austin. Went to her little duplex apartment, sat down, and said, 'Wow. Her boyfriend’s kind of interesting. Got a big beer can collection.’ So we turned the cable on, ate our Jack in the Box, maybe burned a joint, and we were just enjoying life and figuring that everyone else had already gone to bed. And then I saw a guy run across the hallway, and then two big giant college kids came running out going, ‘Who are you guys?’ We were in the wrong apartment.

“Jimmy immediately pulled a cassette out of his pocket and said, ‘We just played on Sixth Street! This is our cassette!’ It turned out that their back door was her front door. We only missed it by one sidewalk. And once the guys figured out that we weren’t going to hurt them – we were old guys, they could have killed us anyway – they looked at us and said, ‘You wanna do a bong?’ It was hilarious. The guys would come out to our gigs for years, and they would always come up and say, ‘Do you remember us?’”
Raycraft stood out from the pack due not only due to his outstanding talent and singular world view, but also because of his non-standard appearance. As rock and rollers go, Raycraft was no Mick Jagger, nor Robert Plant, nor even Phil Collins. He was, however, self-aware. In 1984, he told the Austin American-Statesman, “People often don’t know quite what to make of this bald-headed guy who looks like a geek playing all these old tunes. I figure the visual effect of a bald guy trying to play 'I Am the Walrus' on Hawaiian guitar is pretty weird. I don’t try to look like some rock guy. I think of Harpo Marx when I’m on stage.” A favorite bit of Raycraft schtick was to stand before the audience, running a comb over his bald pate and asking, “My hair look OK?"

For many years, Raycraft was an avuncular fixture at Rockin’ Robin Guitars and Music, using his knowledge of gear to steer customers in the right direction while frequently amusing his coworkers. Musician Nick Rawson, who taught guitar lessons at Rockin’ Robin during Raycraft’s tenure, said, “Jimmy came up to me one day and said something, but he was mumbling. I leaned in closer and asked him to repeat it. I still couldn’t understand him. I leaned in even closer, but I still couldn’t hear him. Then I leaned in really close, and he said, ‘I like cheese.’” 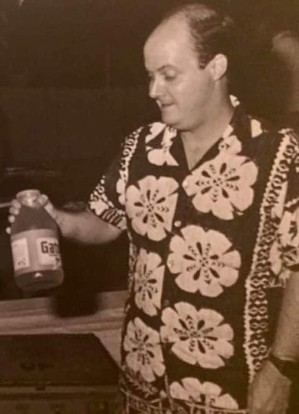 Jimmy Raycraft contemplating a backstage beverage.
Photo courtesy of Beans Barton
After sustaining a serious injury in a fall, Raycraft could no longer handle the physical demands of working at the music store. In his later years, Raycraft also suffered from Parkinson’s disease. Longtime friend McVey and Raycraft were roommates for many years, sharing a house after experiencing a breakup and divorce, respectively, at about the same time. Consequently, McVey was witness to Raycraft’s decline as illness robbed him of his gift.

Reflecting on that time, McVey recalled, “The saddest thing was that he kinda stopped playing. We would buy each other guitars or ukuleles every Christmas and birthday for years, so the house is ridiculously full of stuff. He had a theremin by his chair, he had a travel guitar on top of the chair, and he had a Longhorn bass beside him. Up until the last year, any time anything came on TV – it could be a commercial, it could be a concert, it could be whatever – and the guy would pick up the guitar or turn on the theremin and start playing along with it, perfectly.”

McVey had mostly eased out of the rock and roll world and been hired by Lakewood Church, first mixing monitors and then moving into a management position, supervising sound for over 80 events per week. As McVey explained, “Old sound guys either die or get a church gig.” McVey resigned from that job three years ago, so that he could devote himself to caring for Raycraft. Would that we all could have such a loyal and selfless friend.

For a final word, we turn to Raycraft himself, quoting again from his interview with the Austin American-Statesman in 1984. “To me, nothing we do has any deep meaning to it whatsoever. When I was five years old, hearing 'Hound Dog' for the first time, it was like being plugged into an electric socket. An E chord on an electric guitar drives me crazy; it’s something chemical. People hear that simple beat or that trashy organ sound and it drives them absolutely crazy.  It has no impressive message or moral content. It just makes them want to dance.”
KEEP THE HOUSTON PRESS FREE... Since we started the Houston Press, it has been defined as the free, independent voice of Houston, and we'd like to keep it that way. With local media under siege, it's more important than ever for us to rally support behind funding our local journalism. You can help by participating in our "I Support" program, allowing us to keep offering readers access to our incisive coverage of local news, food and culture with no paywalls.
Make a one-time donation today for as little as $1.