The Houston Music Foundation has opened an additional round of applications for grants serving Houston's music community. Photo By Mark C. Austin
It’s no secret that the live music industry and all of its moving parts are hurting. Since the pandemic began the sector has been at a stand still with limited means to gain income for artists, venues and their support staff.

As the government passed the long awaited COVID-19 relief package, which thankfully includes 15 billion dollars of relief for theaters and music venues, the entertainment industry can breathe a small sigh of relief but the battle for survival continues.

A large part of the relief package is the $600 stimulus check which many Americans will be eligible for and anxiously awaiting as so many have gone most of the year without a steady income or any income at all.

Here in Houston, the Houston Music Foundation has provided one-time payments of $500, just a hundred dollars less than the federal government will provide, to local musicians since their launching in April as a direct response to the massive economic losses to the music community.

Last week HMF announced that they would be once again taking applications for another round of grants for Houston area musicians but this time, they cast a wider net including not only musicians but also live event support staff after they saw the impact they could have and the number of people who desperately need assistance.

This new round of grants was made possible by local rap god, activist and philanthropist Bun B, who made a sizable personal donation along with the proceeds from his delicious partnership with Antone’s earlier this year with the sales of his Hot Wang sandwich.

“Bun is tied to everything,” says HMF co-founder Mark C. Austin explains how HMF took advantage of the timing of these donations along with a a fender custom shop 1961 reissue donated by Fender, which is currently up for auction on ebay.

“Mark has had a relationship with Bun for years and years and he is a very generous man,” says co-founder Rachel Austin. “We feel really blessed not only that he chose us for his charity for Antone’s H-town originals program, but he just obviously cares so much. He gave this beautiful quote to Culture Map about how the big artists are doing okay, it's the local artists we have to worry about.”

HMF is thrilled to be able to expand their reach and offer assistance to other professionals in the music industry, which they have already provided more than $80,000 since they began in April. Rachel recalls the moving testimonies from grant recipients who spontaneously broke into song or cried as they only had twenty dollars in their account when she called to give them the good news.

“It rolled out as a crisis fund but we have a lot bigger aspirations,” says Rachel. “When we first started this program it was like we initially were just looking for a program to get behind, but we couldn't find a program that was specific to musicians or just musicians or just music workers, most of the programs that were out there are for the artists community in general.” 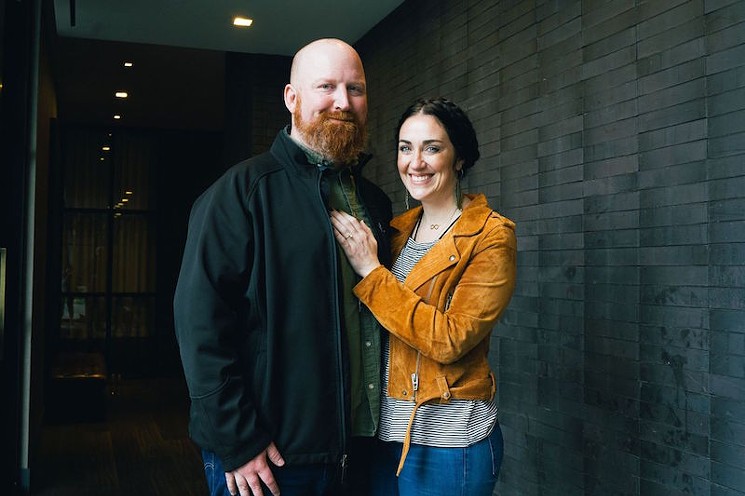 Mark and Rachel Austin stepped up in a major way for Houston's music community launching the Houston Music Foundation.
Photo By Pooneh Ghana
“We are the fourth largest city in the United States and we don't have any programs that are specifically for our musicians so we started this on a wing and a prayer and we've been so lucky and blessed to have so many people get behind us,” she adds.

Applications are open now and HMF plans to award grants to qualifying applicants as long as the funds are there. “As soon as we get money in the door, we will get it right back out the door,” says Rachel.

“One of the benefits of donating to the Houston Music Foundation is that as soon as the money hits our account, we distribute it. It’s not like it has to go through a hundred checkpoints to get to the hands of artists. Our goal is to do it fast.”

Rachel describes the sincere response they have had not only from recipients but also from donors. Recently Klein High School student, Anna Zhou and her peers organized an online concert to raise funds for HMF donating $600.

“We are only as good as the community that donates to us,” says Mark. “So we are just trying to make sure that when people are interested in helping the community, we are there to help navigate the process so they feel comfortable about their donation.”

HMF aims to grow past being a helpful resource during a crisis, to becoming a permanent source of support and unity in our city’s music community helping to build a wider base of support for local artists and helping to advocate on their behalf to local government.

Mark describes the current push along with the Mayor’s Office of Cultural Affairs to work toward Houston becoming a Music Friendly Community, which would officially partner Houston with the Texas Music Office increasing our cities network to help Houston grow as an industry city in the music business.

“It feels like more is being done today for the Houston music community than has ever in my time been done, so we've just got to keep supporting each other and pushing each other,” says Mark.

“I think that there are a plethora of ways that the industry can be assisted right now,” says Rachel. “Of course we want people to donate, every dollar that comes in means so much, but supporting independent artists is important right now too.”

“Buy merchandise from venues and additionally, shop at local record stores. Think about the things that are getting us through this pandemic and put your money into that because artists are literally getting me through 2020.”
KEEP THE HOUSTON PRESS FREE... Since we started the Houston Press, it has been defined as the free, independent voice of Houston, and we'd like to keep it that way. With local media under siege, it's more important than ever for us to rally support behind funding our local journalism. You can help by participating in our "I Support" program, allowing us to keep offering readers access to our incisive coverage of local news, food and culture with no paywalls.
Make a one-time donation today for as little as $1.