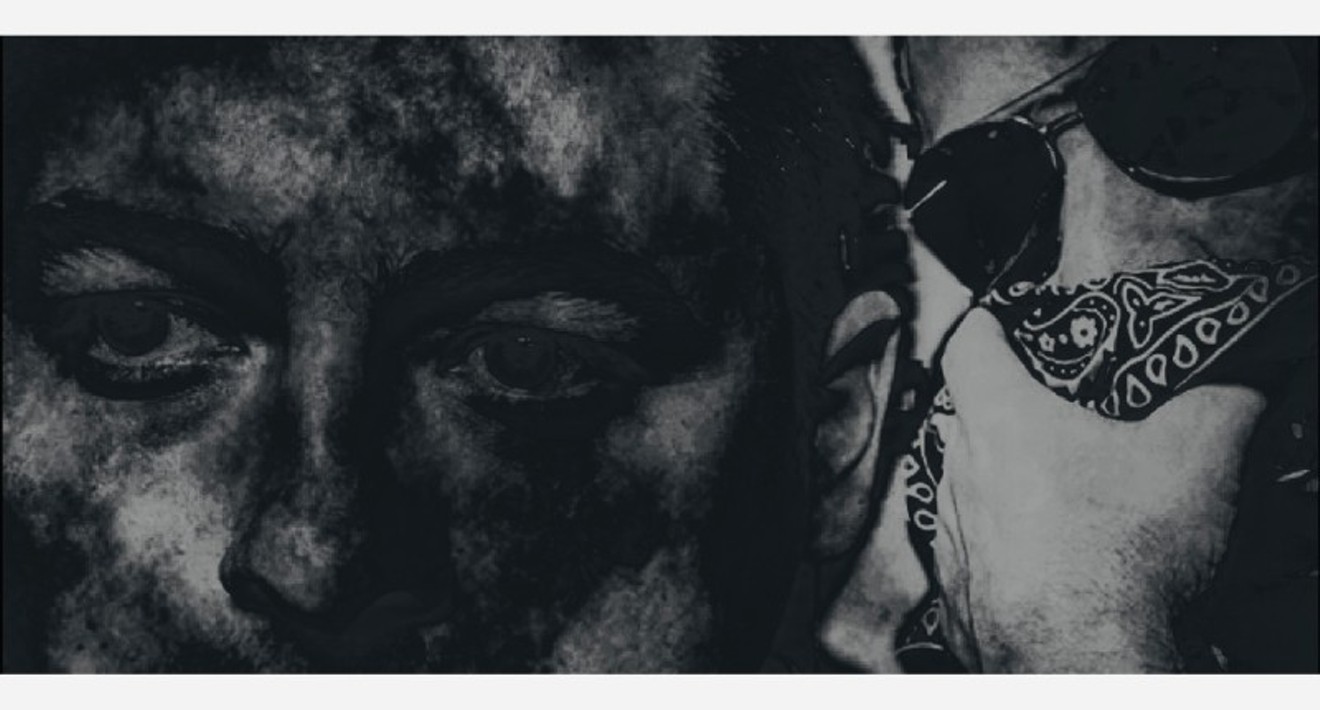 The legendary Italian film director Dario Argento once likened art to a serpent, “always shedding its skin, always changing. And it will always come back. It can't be hidden away like the guilty secrets we try to keep in our subconscious,” he famously said.

The horror auteur wasn’t talking about music or the terror of COVID-19 or Murderus, a new project from a pair of Houston music veterans. But that quote about art shedding its skin and resurfacing as something new eerily applies in this instance. The band’s members, Eric Christian and Ephrem Paz, have sloughed off what they outgrew and returned from the pandemic’s hiatus with art that’s expected to challenge listeners and viewers.

The duo recently debuted a chilling video for “RatNoise,” the first single from Murderus Vol. 1. The mid-May album release was the culmination of years of work between Christian, known for his solo work as Gold Cherry, and Paz, who was guitarist for the experimental metal band Maninkari.

“Mainly, Ephrem’s done a lot of songwriting and we’re doing a lot of collaboration for the last three years,” Christian said. “We have some peers in our group we use to help us do some of the things. I’d say it’s us collaborating about 90 percent of the time.

“We live in the same studio area, so we have a peer group of that kind of hangs out like on a 24-hour basis, whether we’re in different bands or in a band or not. We have these jam nights and we all get together,” Christian said. “During the day, me and Ephrem noticed that we were still lingering around working on our own things. It was like, we’re here together, let’s try to smash these things together and see what we can come up with.”

“We were just always working on stuff and trying to come up with new ideas, like what can we try to do that we haven’t done yet or before,” Paz said.

What they created can be square-pegged as industrial rock or EBM, keyboard and computer-driven music that can morph into full live band mode when the time is right for that. Christian calls Murderus an homage to the bands he favored as “a Numbers kid.” The vibe feels dark, with Argento-ready album graphics and song titles like “Cough Up Blood.”

“Some of this stuff is more direct, some of it’s more fun, but it does have some serious (ideas) - we’re kind of playing with that,” Christian said. “The songs do have fun vibes, but some of it could be heavy. It’s kind of hard to get a balance, to get people to understand that type of a world and gain an audience. Do you scare them away with something that’s scary or does that attract them? It’s kind of a trick – come see what we have over here without giving it all away at one time.


“You don’t want to lose people that you want to expose to different concepts or ideas if they’re completely afraid of it from the get-go,” he continued. “It’s hard to tell what we’re doing. We haven’t not enjoyed it, we’ve been hanging out for a few years now doing this and we have a couple of albums worth of material.”

The first glimpse is the video for “RatNoise,” which opens with lyrics Paz wrote and performs. Christian said Murderus began as an instrumental act but the duo felt Paz’s poetic, impactful words required a vocalist. He said they both perform vocals on the album.

“We couldn’t find a vocalist so we just started doing it. I would try something and bounce it to him and then he would bounce something back. We got excited at some point and just said fuck it, we’ll do it ourselves,” Christian said.

The video matches the vibe of the song. It’s mysterious and a bit sinister and could be jarring.

“We love horror movies and I like being outside,” Paz explained. “I work outside and I ended up finding a spot in the woods and I just thought it would be,…”

“So yeah, Ephrem has a pretty good way of coming up with these ideas that I already know where he’s going with them,” Christian interjects. “This song, and this location for the video, were like a marriage. That song was on the back burner for like a year-and-a-half, so when they found this spot and presented it to me we pulled a group together to do some video.

“We’d been sitting on a song and we had a friend die like in the last months,” Christian continued. “A close peer of ours, so we were like, we’ve got to get this out. He’s one of the only people that knows kind of what we were doing with Murderus, so we thought let’s get it out, like a memoriam.”

After working on the songs for so long, are they interested in early feedback?


“I think there’s maybe a generation gap with this type of music. Some of my older friends, they get it and they’ve been into it,” Christian said. “It’s really hard to work on something artistic worrying about that. We’re so technical, though. I work in the business as a technician so it’s kind of like a really spoiled thing when you’re indulging in your own type of creativity.

“You want to know,” he admits. “I’ve had someone say we write some bad songs. Someone wrote a comment to me, ‘Worst song I’ve ever heard.’ But that doesn’t make me want to quit writing songs. You just kind of laugh at that.”

If anything is lost in translation, it may be found in the ambitious live performances Murderus has planned, full-band, mixed media concerts with a theatrical flair.

“They’re definitely songs and they need to be performed live. We have some guitar players and some drummers that we work with that could help us out. We want to do more of a performance art, at least. We want to put on an interesting show.”

Christian said Murderus can be heard and seen from whichever lens one chooses, but their big picture is to offer something new, the result of what’s been cast off and left in the tall grass of ordinary artistic expression.

“People should be more experimental. We do know a lot of people and when you’ve been around for a while you just want people to do stuff. We need people doing stuff, we need people pushing boundaries and doing things that make people uncomfortable and not doing things that are cliché. There’s a lot of stuff that gets beaten to a pulp,” Christian said.

“We want people to create their own ideas of what’s happening,” he added. “We’re not trying to push an agenda, we’re just trying to get people to think a little bit differently.”
KEEP THE HOUSTON PRESS FREE... Since we started the Houston Press, it has been defined as the free, independent voice of Houston, and we'd like to keep it that way. With local media under siege, it's more important than ever for us to rally support behind funding our local journalism. You can help by participating in our "I Support" program, allowing us to keep offering readers access to our incisive coverage of local news, food and culture with no paywalls.
Make a one-time donation today for as little as $1.