Rapper Z-Ro Presents An Unforgettable Performance For His Birthday Celebration 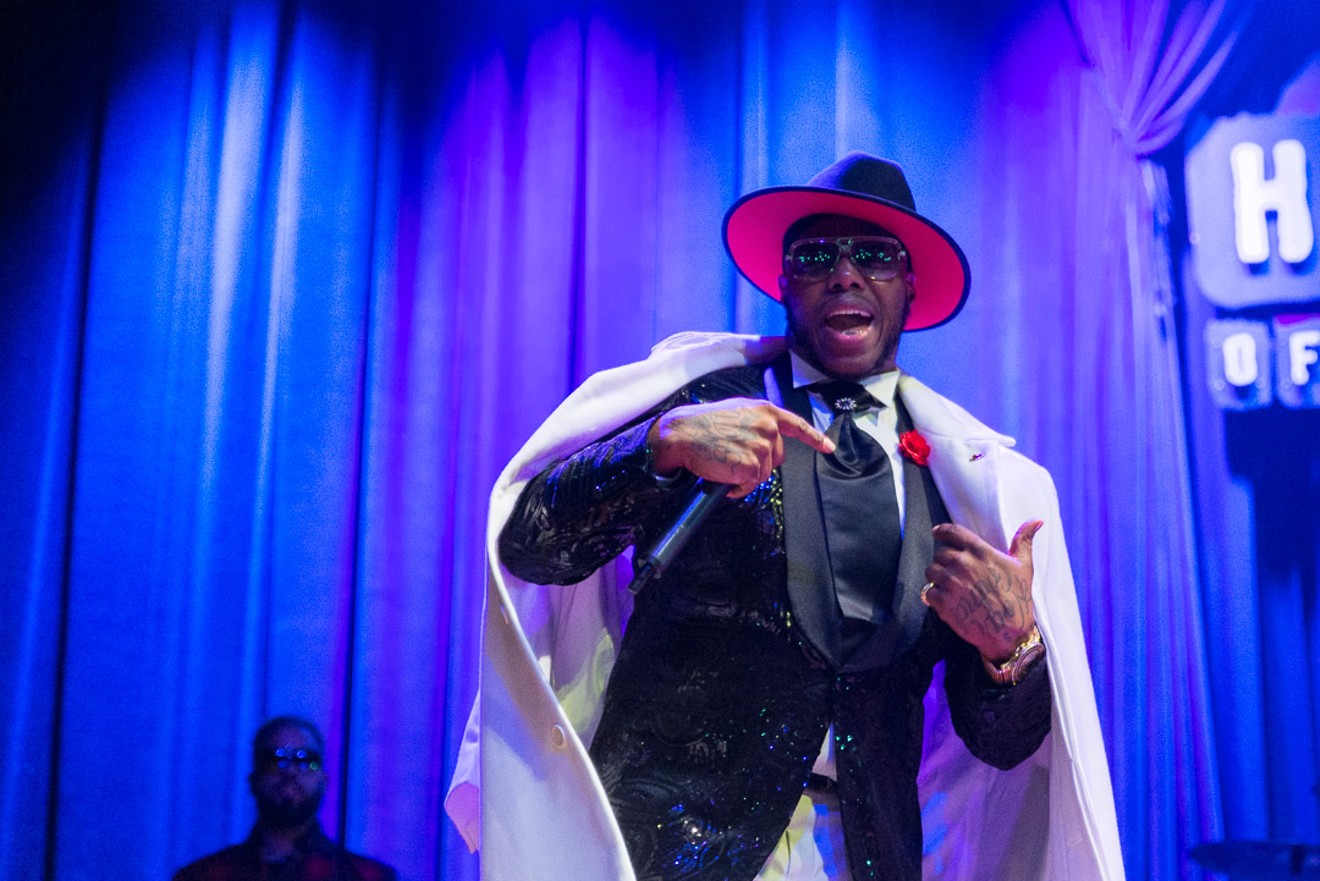 A very happy Z-Ro during his birthday bash. Photo by Jennifer Lake
With its original, unique sounds of chopped and screwed beats, and historic legends like Fat Pat and Pimp C, Houstonians hold their rap scene close to their hearts. So, when an H-Town legend hosts a birthday concert for himself, the turnout and experience is sure to be extravagant. Those who showed up to show out at House of Blues on Sunday night modeled high end dresses, suits, and the latest designer brands in honor of Houston legend, Z-Ro’s 42nd Birthday.

Z-Ro was born Joseph Wayne McVey on January 19, 1977 on the south side of Houston and grew up in Missouri City, earning him the moniker "Mo City Don." He released his first album, Look What You Did To Me, in 1998. Since then, he has released 23 solo albums and a multitude of collaboration records, including two alongside Houston rapper Trae The Truth, as the hip-hop group ABN (Assholes By Nature). 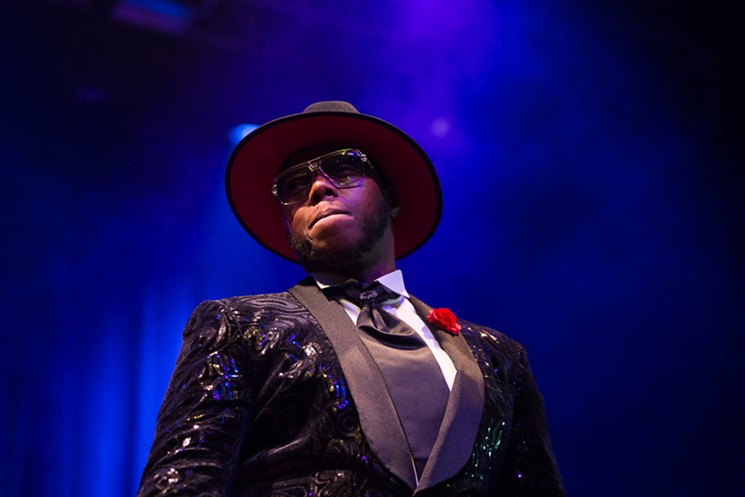 Rapper Z-Ro during his birthday celebration.
Photo by Jennifer Lake
Known for his incredible ability to freestyle, Z-Ro had moderate success as an underground rapper with his initial releases. He began to gain commercial success after signing to Houston mogul, J. Prince’s (who was in attendance) record label, Rap-a-Lot Records, and the release of his first charting album, The Life of Joseph W. McVey. The Houston rapper has since released dozens of “City of Syrup” classics that he and the rest of the crowd sang and danced along to during his three-hour long birthday bash.

Before Z-Ro hit the stage, longtime friends, Houston rap figures Propain, Paul Wall, Slim Thug, and Big Pokey warmed the crowd up. Each artist sang a couple of songs and shared stories of the birthday boy. A few personal friends, including his lawyer and fitness trainer, came forward to share memories of the rapper, telling the accounts of him conquering his drug addiction and his continuous struggle to not slap fans who invade his personal space, as well as some kind words in his honor.

Z-Ro entered the stage surrounded by a congregation of people ranging from industry friends to members of his church. 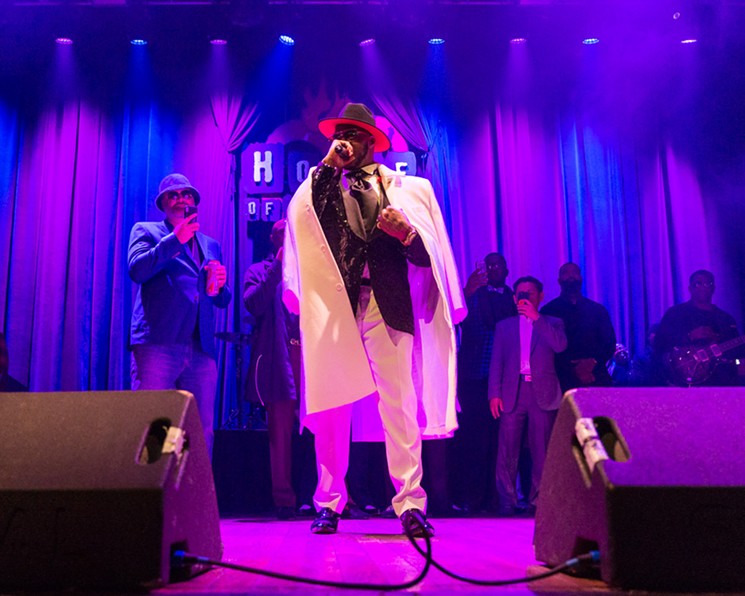 Rapper Z-Ro performs as he's watched by friends and family.
Photo by Jennifer Lake
“All right everyone, are you all ready? We ain’t going to do none of that singing shit. On the count of three I need everyone to put their middle finger in the air and say ‘Happy Birthday Z-Ro!’” the Houston rapper was acknowledged with a proper ABN salute.

Z-Ro stood centerstage as he gave his opening speech decked out in a black, paisley, sequin blazer, white suit pants, and shiny black loafers, accented by a red silk boutonniere, a stylish black felt hat and a bulky white overcoat draped over his shoulders. 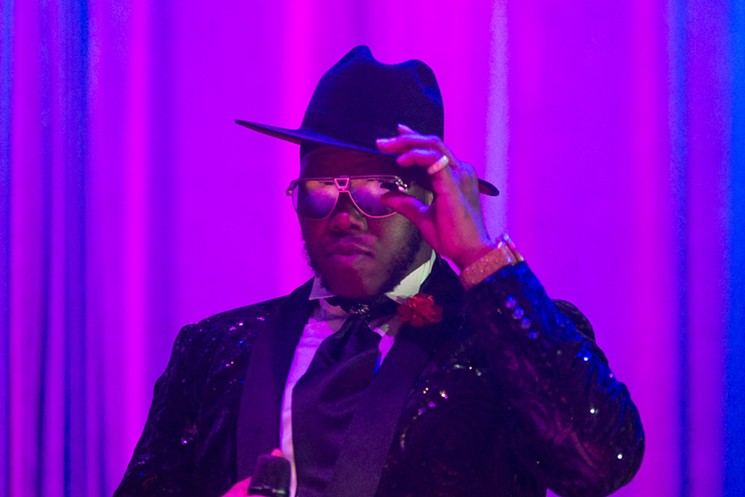 Z-Ro and his stylish outfit.
Photo by Jennifer Lake
“Y’all didn’t know I was going to wear my pimp shit! Yeah!” exclaimed Z-Ro, gathering an uproar of cheers from the crowd. “I want to thank everyone for coming out and supporting me. J. Prince, Big Angry, that’s that tall-ass white dude y’all see over there. By the way can someone please grab me a drink?” asked the rapper as he turned around and held up his hand, mimicking shaking an empty glass. “Well, without further ado, let’s do what we’re gonna’ do.”

The rapper began his set with Bun B’s 2005 classic “Get Throwed,” which he sang the chorus on, and had the crowed instantly singing and dancing along.

“I know we’re going hard tonight” acknowledged Z-Ro” and I know half of y’all thought I was going to be dead by now; I want to thank J. Prince, personally, I was in a real bad place a long time ago with drank and he was the one that helped me break the habit. I understand why, now, and appreciate what he did. I was real fucked up for a while there but I clean up really good now!” shouted the rapper, emphasizing his “threads” as he tugged on his lapel. 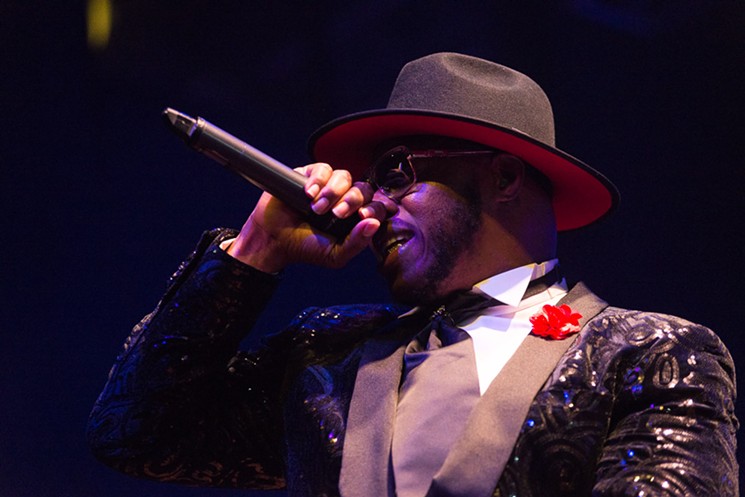 Houston Rapper Z-Ro performing.
Photo by Jennifer Lake
The Houston legend ran through an extended set list ranging from unheard, new material, to older songs and features that have unanimously gone down as rap classics. Ending his set, the “Mo City Don” performed “Mo City Don Freestyle”, arguably his most prolific song, a near five-minute freestyle that once started, can't be stopped, as Drake found out while performing the song in Houston in 2009. Bathrooms emptied and bar lines evacuated as everyone rushed and packed as close to the stage as they could get to witness the spectacle of the live performance.

With a drink in hand for every moment since first asking, the rapper ended the night by letting everyone know he would continue to go get drunk and that everyone should safely go do the same as he extended his arm out to the fans in the front row, finished his drink, and walked off stage.

1. Get Throwed
2. (Unreleased/Untitled) You Must Not Know Who I Am
3. Joy
4. Too Many N*ggaz
5. I Can’t Leave Drank Alone
6. Hi Haters
7. Haters Got Me Wrong
8. My Money
9. Respect My Mind
10. So Houston
11. Still Get No Love
12. One Deep
13. One, Two
14. Happy Alone
15. Devil Ass City
16. Up In You
17. (Unreleased/Untitled) He’ll Be There
18. Top Notch
19. I Hate You
20. Mo City Don Freestyle
KEEP THE HOUSTON PRESS FREE... Since we started the Houston Press, it has been defined as the free, independent voice of Houston, and we'd like to keep it that way. With local media under siege, it's more important than ever for us to rally support behind funding our local journalism. You can help by participating in our "I Support" program, allowing us to keep offering readers access to our incisive coverage of local news, food and culture with no paywalls.
Make a one-time donation today for as little as $1.