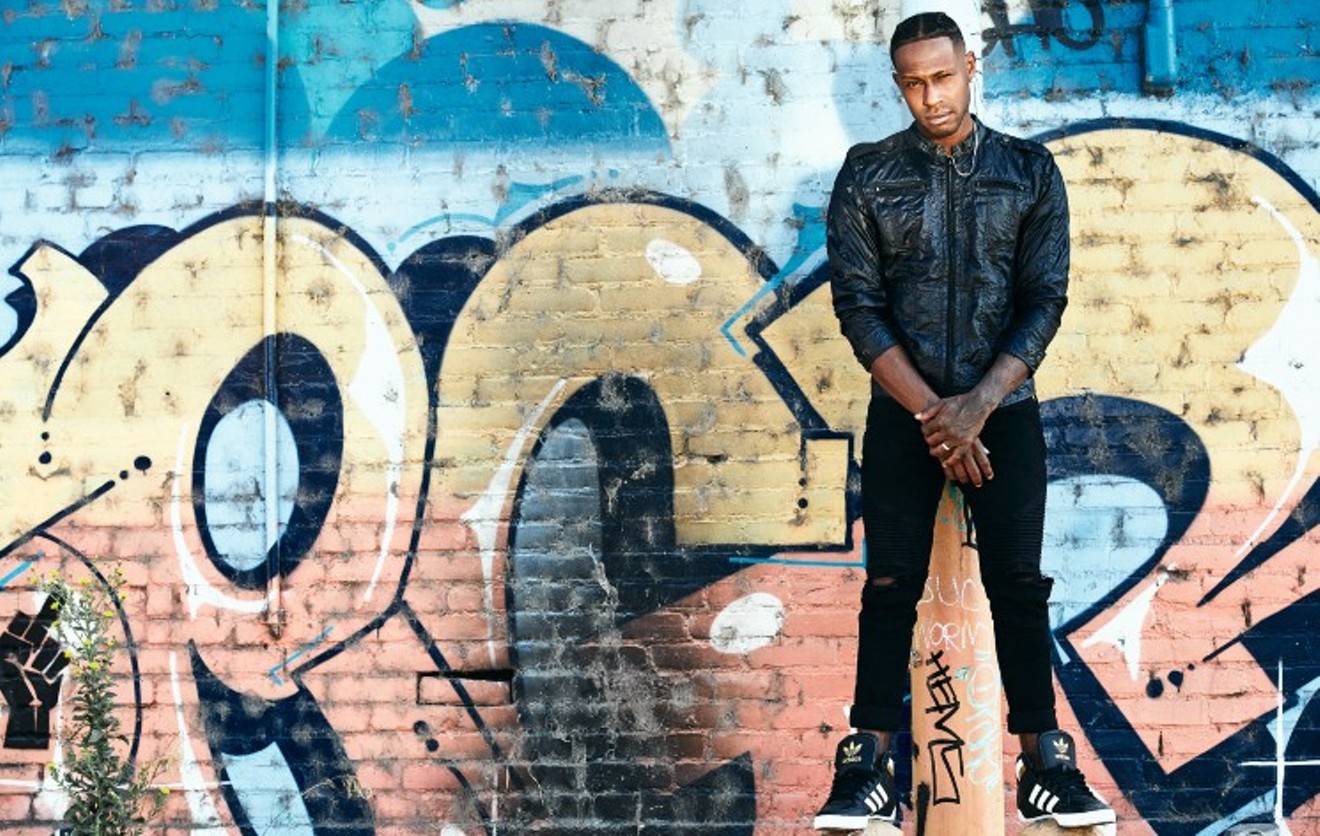 For more than a dozen years, Hyro The Hero has been on a journey that’s whisked him from southeast Houston to places across the globe. Like a modern-day Odysseus, he’s fought to get respect. Hyro’s chosen battlefield is the treacherous music industry and he’s been victorious thanks to persistence and a cunning fusion of hip hop and rock music. Like the legendary Greek king, this Hero has returned home, both literally and artistically.

“It’s amazing just seeing my friends and family. I’ve been gone, in L.A. for 13 years, and what brought me back to Houston was the lockdown,” he said. “I ain’t touring, so I said I might as well come back and spend some time with my family.”

The downtime slowed Hyro’s tour schedule but allowed him to fine tune some songs which he’s amassed into a mixtape, a nod to his Houston/hip hop roots. Slated for release later this year, several tracks from the mixtape, dubbed Kids Against the Monsters, have already been released and showcase some of modern rock’s most notable names.

“Having the career I’ve had, I’ve done amazing things, so when that stopped I had one of my biggest tours ever in America (scheduled). It was me, Asking Alexandria, Falling in Reverse and Wage War, so I was super excited, me and my band, and then it just stopped. I was like, ‘No fucking way,’” he said of last year’s events. “Luckily enough I recorded these tracks that y’all are hearing with (From First to Last’s) Matt Good who produced ‘We Believe’ and ‘Fight’ and ‘Retaliation Generation’ and ‘Legendary’ and other songs y’all are gonna hear.

“Luckily, I was able to finish that pre-COVID and in that time frame I knew everybody was at home,” he said. He and his manager explored guest features for the tracks. The roster includes Disturbed vocalist David Draiman, Brandon Saller of Atreyu, Ice Nine Kills’ Spencer Charnas and Chad Gray of Hellyeah and Mudvayne, which recently announced its reunion from a 12-year hiatus.

“The amazing part about that is I’ve put so much work into my career and gained so much respect that it’s a crazy feeling to have these people jump on my record. They’re literally exposing me to their fan base and it just shows the respect they have for me, you know what I’m saying? So, I’m really happy about that.


“I’m treating rock how a rapper would treat a mixtape, bringing all these features and just having fun. I think a feature is the standing point about that. A mixtape within rock and roll, done hip hop style, is fucking crazy,” he said. “It’s like full circle for me because I was sampling rock music. Now I’m not sampling anymore. I actually have a David Draiman, I have a Chad Gray, I have Brandon, I have Spencer. You know, it’s just crazy, you feel me?”

Hyro said his fusion of hip hop and rock goes back to his high school days. He grew up near Broadway and said he attended Milby High School.

“During high school a girl broke up with me so I was real mad and I was like, ‘Man, I’m rapping already, I gotta change it up right now,’ so I changed the station and heard rock music and I was like, ‘You know, I’m gonna scream at her on rock.’ So, I took a rock song, sampled it and then, hey, that’s where I’m at.

“That’s what took me out to L.A. At that time, it was like you had to go to L.A. or New York to pursue your career,” he said. “I went to L.A., started pursuing everything, made a dope record with Ross Robinson called Birth, School, Work, Death that took me around the world and a few years later I made Flagged Channel that had ‘Bullet’ that went to a million plays and all kinds of crazy stuff. That helped me to get signed to Better Noise right now where we’re at with this new mixtape called Kids Against the Monsters, man.”

“And I’m back in Houston,” he said, “hometown Hero back.”

Hyro describes his sound as “a new version of Rage (Against the Machine) in a whole different way with 808’s and trap sounds.” That fusion earned him a following among his peers, the artists who are featured on the album.


“I gave Chad the songs, I just let him pick which one he wanted and he chose ‘Fight’ and he literally took it to a whole ‘nother level, things that I wouldn’t think you would do to the song, his mind goes in a different direction and does it,” he said. “Same with David Draiman. I sent him that song and I was singing the chorus. When I sent the song, I thought, ‘Okay, he’s gonna take me off the chorus and he’s gonna sing.’ Well, no. He sang along with me, so now I’m singing with one of the greatest singers in the world!”

That song is titled “We Believe” and it feels timely, with social commentary and a call for armchair activists to get off the Internet and into action. There’s a line in the song that summons the murder of George Floyd and countless others.

“The crazy part is I wrote ‘We Believe’ four years ago. It’s crazy that it still goes on now,” he said. “I like to tell people that I wrote that song at that time because I say, ‘I can’t breathe!’ but I was talking about something totally different because George Floyd didn’t happen yet.”

Timing is something artists notice, especially artists like Hyro The Hero, artists who keep grinding. He looked back at how he started, what he expected when he moved to Los Angeles in 2007 and what the current, exciting project might mean for his future.

“When I came up, I was just straight hip hop, that’s where I come from,” he said. “I changed the radio station and heard Nickelback and I was like, ‘Yo, that’s rock and roll.’ That took me to dive deeper and then I started getting into Fishbone and I was like, ‘Oh, shit, they’re Black!’ Fishbone, Bad Brains, then I got to At the Drive-In, which is one of my favorites. Then I got to Rancid, you know, they had the tattoos and everything. I fell into a bunch of different stuff.”

Some of that stuff was from Houston's hip hop artists. They showed the kind of following an earnest, innovative rapper could build here. He’s not sure he has that kind of traction in Houston. He’s played shows across the globe, been on massive tours like Disrupt Festival and has earned accolades from BBC and Afropunk but is still working to accumulate hometown fans.

“I always say when it comes to DJ Screw and Paul Wall and all these people who made it, I always wanted to have that type of movement within Houston,” Hyro said. “I wish I had that type of movement that DJ Screw and everybody created. That would have been epic. Don’t know if I have that but maybe when I come back around I can measure it, especially with everything going on right now. But I always have fun shows in Texas.”

Hyro is hoping to draw more hometown fans with his new mixtape, Kids Against the Monsters
Photo by Travis Shinn, courtesy of Better Noise Music

“You know how we are, man. I’ve got Texas tattooed on my neck. I’ve gotta represent all the time,” he said with a knowing laugh.

There’s value in the long game, putting in the work to become someone followed by generations of fans. Hyro has learned this, it’s the subject of one of his new tracks. Like Odysseus, he’s building a name for the ages from an epic journey.

“There was a moment in time where I thought, man, maybe I’m not doing this right. At the beginning, when I first moved to L.A., I thought I was gonna be a big superstar and all this stuff. But then I learned how the music industry is. You have to work your way, wet your feet – even though you see a one-hit wonder, you don’t know what that one-hit wonder did to get that one hit you know, the hard work they put in to get that one hit. They didn’t just pop up on the scene.

“So, I learned a lot of that kind of stuff. And I also learned it’s not about no one hit,” he said. “I’m cementing my name in here. That’s what ‘Legendary’ is about with Brandon, trying to cement my name – and sometimes that takes some time. And, I’m doing something so different it’s gonna take a while for it to get there, but it’s all happening now.

“The way society is now, genres are mixed up, so now it’s even more of an openness to it. I’m not mad at the direction I took, I love the direction. I could have been just straight rapping and maybe been a big superstar, but then it probably wouldn’t have been this lane that I’m doing that I’ve made my own self.

“It’ll last longer, I feel like it’s gonna last longer,” he concluded. “I’m creating this fan by fan, slowly, and then I can rock out forever like fucking Aerosmith, when I’m old as hell, trying to jump off a speaker.”
KEEP THE HOUSTON PRESS FREE... Since we started the Houston Press, it has been defined as the free, independent voice of Houston, and we'd like to keep it that way. With local media under siege, it's more important than ever for us to rally support behind funding our local journalism. You can help by participating in our "I Support" program, allowing us to keep offering readers access to our incisive coverage of local news, food and culture with no paywalls.
Make a one-time donation today for as little as $1.