Jimmie Dale Gilmore Reveals All Ahead of Houston Performance 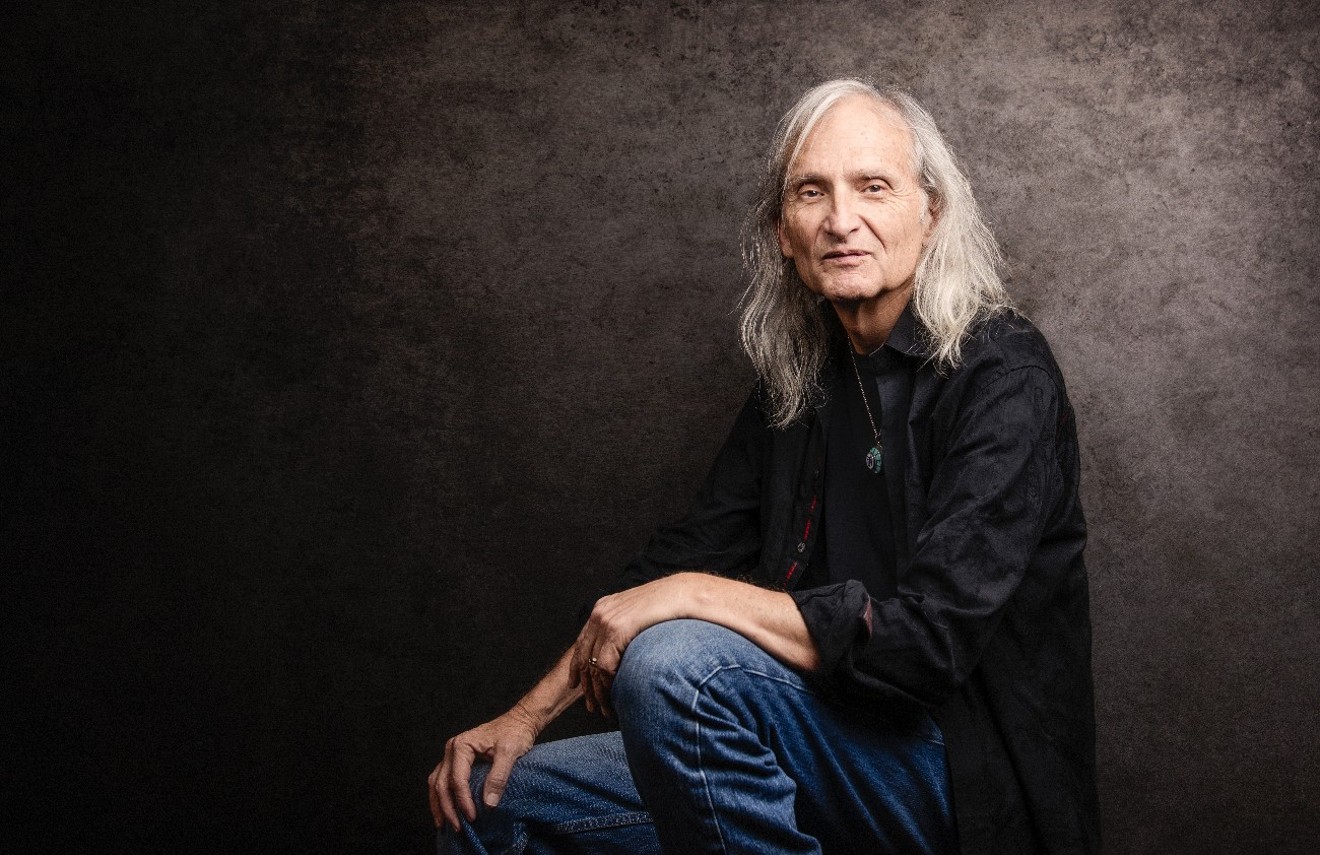 Jimmie Dale Gilmore is a Texas treasure & one of the best songwriters ever. Photo by Valerie Fremin
Who is the best rock n' roller, who has the strongest stage presence, these are questions that are difficult to answer, no matter who you ask. However those in the know when asked you is one of the greatest songwriters ever, will undoubtedly name Texas' Jimmie Dale Gilmore.

A native of Tulia, Texas born with a voice for country music, Gilmore is probably best known for his role as Smoky in The Big Lebowski. Though if you're a Texan, you definitely know Gilmore for his soulful songs and intriguing vocals. The Houston Press was honored to chat with the living legend about growing up in the Panhandle, how he and Dave Alvin got together to record a new album, and what it's been like spending a life in the music industry.

When you grow up around Texas music, there are plenty of voices you should be familiar with. The off-center phrasing of Willie Nelson, the soulful tone of Mance Lipscomb, the operatic voice of Roy Orbison, and the warbling tenor of Jimmie Dale Gilmore. Born in an Amarillo hospital, Gilmore had a father who played guitar in a small country band before moving and growing up in Lubbock. Starting with The Flatlanders with Joe Ely and Butch Hancock, Gilmore has definitely been making music worth knowing for a long time. Reading that Gilmore once stated, "music was higher up than religion in my household growing up," it made us wonder what it was like growing up in such a small town and who he was influenced by growing up.

"I was born in Amarillo because my mother had a rough birth and they needed to have me in a larger hospital. Ironically, Joe Ely was born in the same hospital. My parents grew up in Cress, Texas and met at Cress High School, where ironically, Joe's parents met as well. My dad was into the old country, stuff like Webb Pierce and Marty Robbins.

"The radio was essential, I was at the exact right age and at the exact right time to hear the perfect rock n' roll. My dad grew up with country music on the radio, and he even played in a band. In fact, I was named for Jimmie Rogers, my birth name isn't James, it's Jimmie, which is why it's spelled with IE and not a Y. So what he listened to was what I heard as a kid, and that music still holds a very special place in my heart.

"When I got old enough to play, I got deep into roots music during the folk revival. That's when I discovered that the blues is where the best music came from, even 1940's and 1950's country. In the '60s, I immersed myself in the music of Lead Belly and Jimmie Rogers. The love of good slammin' rock n' roll is one of the many things Dave (Alvin) and I have in common."

Gilmore has had a pretty intriguing life in music, one that has been done on primarily his own terms. We chatted about artists who were great songwriters, but who never made it outside of Texas, or who were surpassed by lesser artists. When asked if he thought things would have turned out differently if The Flatlanders had been more ambitious, Gilmore replies, "yeah, probably so. It's hard to say because part of our magic was cause' we did it for the love of it. We're all so different in so many ways, but we were young and we learned a lot from one another. Joe is younger than me, but he was already a professional musician who had been in bands. If we'd have followed Joe's lead more, it could've taken off. But who's to say? I befriended Colonel Tom Parker when he was beyond the time of having influence, and he told me that an artist needs three things to make it. Talent, hard work ethic, and luck. I was friends with Doug Sahm, and no one else was in his league when it came to songwriting. But Parker was right, I observed many lesser acts have more success than Doug because they happened to have luck on their side."

Dave Alvin & Jimmie Dale Gilmore together sound like a match made in music heaven.
Photo by Jeff Fasano

When you go through Gilmore's catalog, you can't help but notice his landmark 1996 album, Braver New World. It's ambitious, it's different, and it contains sounds that no one before or after has attempted to place on a country record. Produced by T-Bone Burnett, Rolling Stone called it "a West Texas version of Dark Side of The Moon." When asked what the catalyst for the record was, Gilmore says "here's the whole deal. Elektra (Records) was trying to figure out what to do with me. The people at the label who were behind me were 100 percent behind me, David Bither who now runs Nonesuch thought I was unique and I could go the long haul. But they couldn't find a genre to pigeonhole me into. That record is an experiment and it was so much fun to make. There's a lot on it that didn't appeal to me at the time that I love now."

For the past 15 years, Gilmore has had his son performing on many tours with him. Having Colin Gilmore open or perform a song swap has become a thing that's worth experiencing as father and son seem to have quite a bit in common while playing almost completely different styles.  "I just love it. It's difficult in that he's like me in so many ways, he's not commercial, he's just doing what's coming from him. It's not music that's tailored for the showy pop world. Colin is an interesting person, he's quiet but also self-confident at the same time," says Gilmore of his son.


When the subject turns to the new album, Downey To Lubbock that he and Dave Alvin are touring in support of, Gilmore really lights up. Alvin, known best for his work with his brother Phil in the Blasters, has been around the same spaces as Gilmore for a while, making their pairing feel almost perfect. When asked how this album came to be Gilmore says, "Dave and I met in the '90s. He toured in the Ely band but I missed that. We were both on the Hightone label at the same time, and they did a tour that was the first Monsters of Folk tour, and while we didn't play together, we still hung out together. My agent actually thought to put us together, so we booked a tour and discovered we had a lot in common.

"I went out to L.A. when I was 19, and I was already married with a little baby girl. I went to a club out there called the Ash Grove, and while I never saw Lightnin' Hopkins in Texas, I saw him a lot out there and became friends with him. When we were on tour, Dave and I, I told that story and it turned out that Dave and his brother were hanging out at the Ash Grove at the same time. Dave and I both really like slammin' music, but the history is what we really love. I didn't even really get into the Stones until they started putting those blues guys on the map, but Dave is more of a music history scholar than I am."

Both men have such a rich history of music on their own, and a deep well of songs to pull from that it's staggering. When asked what fans should expect from the show, Gilmore says, "what happened, the genesis of the record, came from the fun we had touring last year as a duo. A lot of the record is seasoned music. The whole thing happened because of Dave, it's a new take on those songs. After three nights of playing together, it was his idea to do the record. He spearheaded the whole thing with Craig Parker Adams to get it done. Half of the album is L.A. studio guys and we got Brad Fordham and Lisa Penkratz on. We got a blend of the two for the record, while Dave gave me a producer credit, it was 60/40 with him on top in my opinion. The live show is a full band, and we're in L.A. rehearsing now. As for solo works redone, I'm sure we will do some of that, as some of the show lends itself to that."

Downey To Lubbock is magical from start to finish.
Photo courtesy of Yep Roc

While the record isn't out until early June, the two artists together already sound magical on the tracks they've released. While Gilmore doesn't really seem like the guy who takes praise well, I mention something that Lucinda Williams once said about him. "Jimmie has the ability to transform beauty into sadness, just like Hank Williams Sr. did." When asked if he could concede that a life of heartbreak is what leads to great songs he replies, "I think that's probably true. Good music has passion. Lots of times, passion comes from heartbreak and sorrow. People get to express themselves and their emotions in music, in a way they can't really express anywhere else. But a lot of it, not all of it, comes from hurt."

Whether or not Gilmore is pulling from hurt, his songs are the soundtracks of the lives of anyone who's every heard him sing a tune. With Dave Alvin, Jimmie Dale Gimore will expand on that sentiment even further. You can stream both Dave Alvin and Jimmie Dale Gilmore's work in the usual places, and you can pre-order a copy of Downey To Lubbock from Yep Roc Records. You can catch the magic of Jimmie Dale Gilmore and Dave Alvin live and in person with a full backing band at The Heights Theater on Friday June 1. The all ages show will have an opening performance from Colin Gilmore. Doors at 7:30 p.m.; tickets $26 to $38.
KEEP THE HOUSTON PRESS FREE... Since we started the Houston Press, it has been defined as the free, independent voice of Houston, and we'd like to keep it that way. With local media under siege, it's more important than ever for us to rally support behind funding our local journalism. You can help by participating in our "I Support" program, allowing us to keep offering readers access to our incisive coverage of local news, food and culture with no paywalls.
Make a one-time donation today for as little as $1.