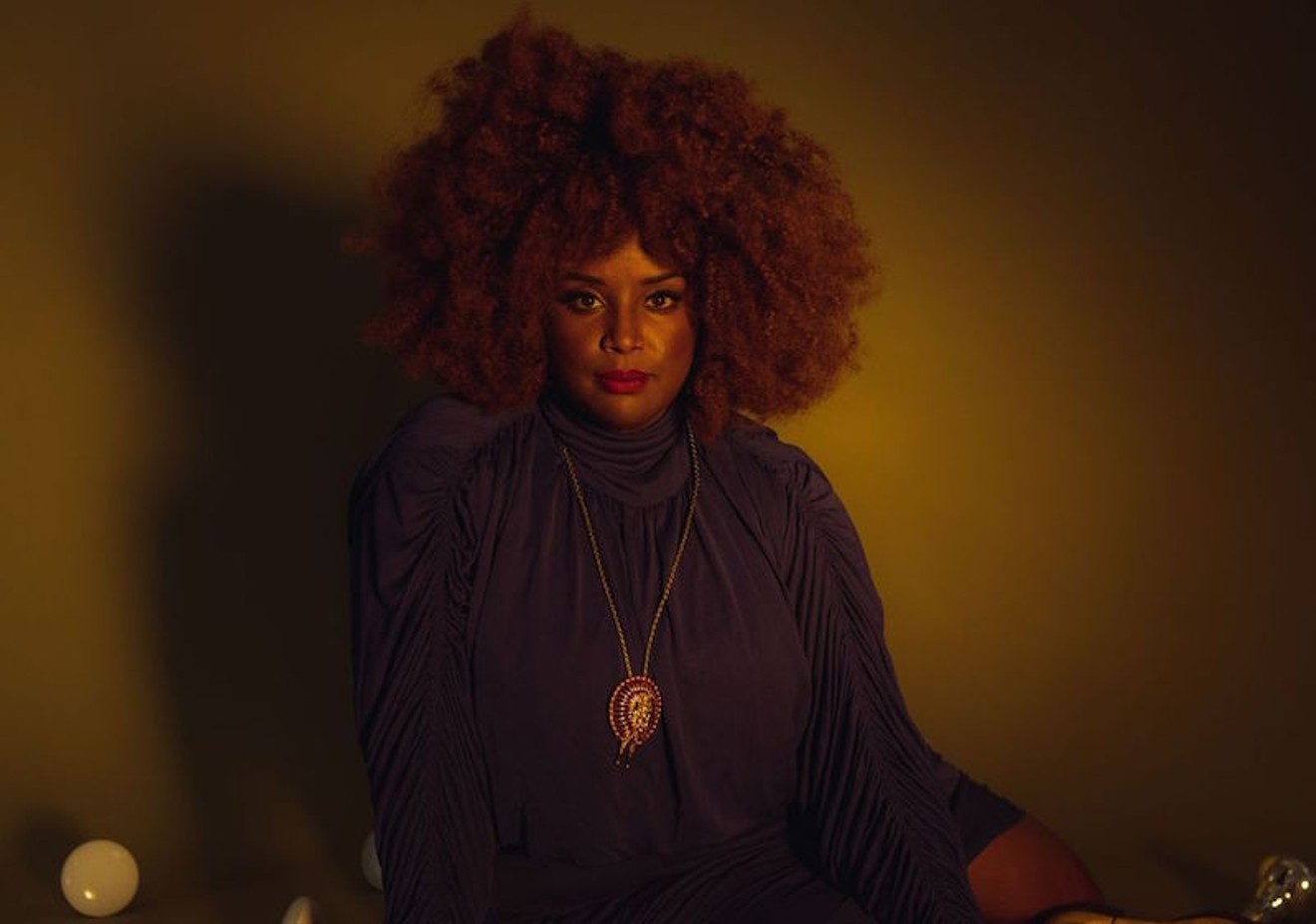 Kam Franklin has released her first solo single, "Don't Get Caught Sick." Photo By Troy Montes
Kam Franklin has been the magnetic front woman for The Suffers for ten years now. She and her band have been uplifting audiences and helping to shine a positive light on our city time and time again since they formed.

Franklin has been busy working on not only The Suffers' next album, due out next year, but she is also pushing forward with her upcoming solo project which she plans on recording next year.

This week she released her first single, “Don’t Get Caught Sick” offering fans a taste of what's to come. “I was completely uncomfortable,” admits Franklin of her new sound. “I feel like some of the best art happens when you are uncomfortable.”
“Don’t Get Caught Sick” is a mesmerizing chant reflecting the despair, frustration, fear and ultimately hope of Americans in regards to the country’s flailing healthcare system.

The song is a simple and airy tune featuring The Suffers drummer Nick Zamora playing a large, outdoor xylophone, an instrument he came across in a public park in Utah.

“I was in a trance when I heard it the first time," says Franklin of Zamora's instrumentation. "At that point I had been listening to a lot of Alice Coltrane,” says Franklin describing how she purposefully immersed herself in new sounds during that time to a point where she jokes others may have been concerned for her well being.

Zamora’s dreamy playing combined with the sounds of laughter of children in the park and Franklin’s foreboding lyrics all twirl together to reflect the current mess of the country’s healthcare system and the ultimate possibility for a better reality for everyone.

“I had read this article about this diabetic woman who died because she couldn't afford her insulin,” says Franklin describing the shock and horror she felt while reading the article and wondering how this could happen in the United States of America which ultimately led to her writing this song.

“I don't hear a lot of songs like that, especially when people sound like me and I've been very interested in what might happen if I started singing about a lot more real issues instead of just soul music and love songs and really more so approaching it like a blues but not anyone's blues, my blues.”

"I've been very interested in what might happen if I started singing about a lot more real issues instead of just soul music and love songs and really more so approaching it like a blues but not anyone's blues, my blues.”

She recorded the song on a small microphone in a basement in Baltimore capturing a stripped down and more hushed tone than she is known for. Franklin then sent the recording to friends and collaborators for feedback.

“I honestly just listened to the listeners and let it live,” she says of the process. “I left it pretty spacious because I have a lot of intent to eventually remix the song and add collaborators in a different way. I wanted it to almost serve as a meditation and as a release and for me it was a release to sing it.”

Franklin performed “Don’t Get Caught Sick” for the first time in an ideal setting surrounded by empowering women just like her, at the Newport Folk Festival with none other than living legend, Chaka Khan.

“It was incredible and I would say the top three highlights of my career for sure,” she says of the extraordinary experience. “To just be in the presence of that many amazing singers, especially Ms. Chaka Khan, you can't compare it to anything.”

“Having the opportunity to sing this song there for the first time as an independent songwriter from Houston that has been told so many horrible things about the type of singer and writer I am and what I can and cannot do, it was almost instant validation to just step into this path of newness with my music and the things that I choose to do outside of my band.”

Franklin and Newport go back to 2015 when The Suffers performed there, launching friendships with the festival, its organizers and like minded artists that last to this day. Though her voice is one of the main defining sounds of the band, Franklin is clearly setting some boundaries for her solo work.

“With the work that I do with The Suffers, it's usually very loud and complex with all these very big soulful sounds and I really wanted to show something simple and show a different tone of my voice and just honestly start this new era as a producer and as a writer and so much more because I finally feel ready to do that and call myself that.”

She adds, “Get my happiness and joy and all my other big band stuff out with The Suffers and tell my more intense stories and songs that I want to do solo.”

Don't Get Caught Sick is available for streaming now. The Suffers will perform with Tank And The Bangas on Thursday, December 2 at The Revention Music Center, 520 Texas, 8 p.m.,$20.
KEEP THE HOUSTON PRESS FREE... Since we started the Houston Press, it has been defined as the free, independent voice of Houston, and we'd like to keep it that way. With local media under siege, it's more important than ever for us to rally support behind funding our local journalism. You can help by participating in our "I Support" program, allowing us to keep offering readers access to our incisive coverage of local news, food and culture with no paywalls.
Make a one-time donation today for as little as $1.